“My role at IRRI is to think about the bridge from research to development and taking the robust science that IRRI is well known for and making sure that gets into the hands of the farmers,” says Carolyn Florey. “The creation of this position is very unique for a large international organization like IRRI and, to me, the position is very forward-thinking and interesting.” 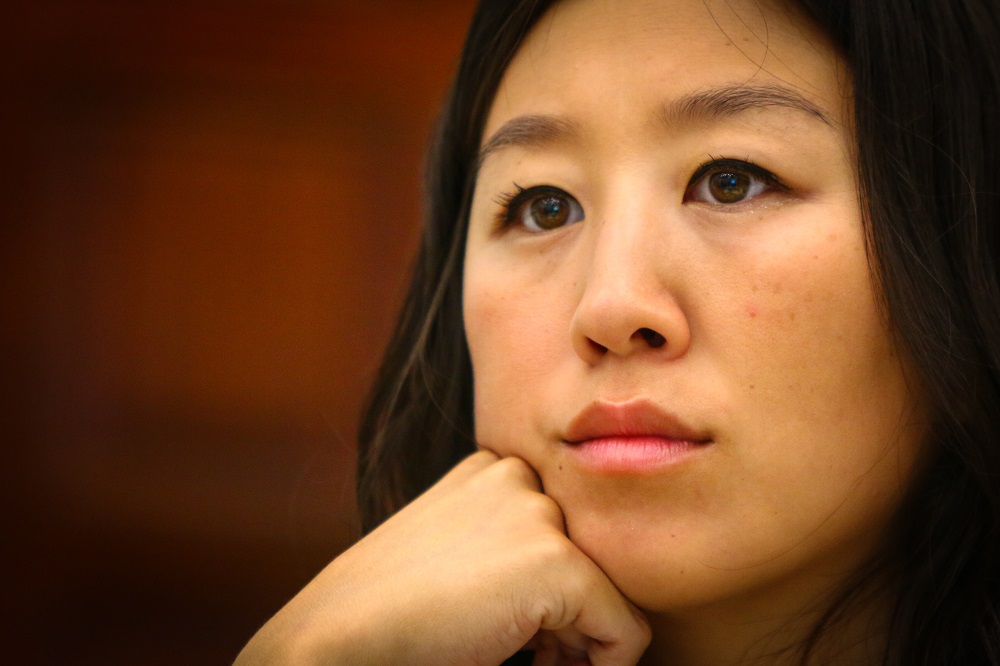 When Carolyn Florey joined the International Rice Research Institute in January 2017 as the Technology for Development lead, she also stepped into a position that has profound implications.

Science, technology, engineering, mathematics (STEM) remain steadfastly a man’s world.  Today, only 28% of all of the world’s researchers are women, according to a 2017 United Nations Educational, Scientific and Cultural Organization (UNESCO) report. The gender disparity can be traced to the under-representation of girls in STEM education which, in turn, is deeply rooted. Gender differences in STEM education participation at the expense of girls are already visible in early childhood care and education and become more visible at higher levels of education, the report said. Female student enrollment is particularly low in information and communications technology (3%) and natural science, mathematics, and statistics (5%).

The scarcity of women in the technology field isn’t just about having gender balance in the workforce. Given the global technology sector’s chronic shortage of skilled specialists, it is a societal concern and a major workforce problem, according to ISACA, an international professional association focused on IT governance. Having a more diverse and digitally-savvy workforce can only benefit both commercial and public good essential to economic development and growth.

ISACA’s 2017 Women in Technology Study identified the barriers experienced by women in technology and the lack of mentors (48%) and the dearth of female roles models in the field of technology (42%) topped the list.

This is where Mrs. Florey comes in.

“My role at IRRI is to think about the bridge from research to development and taking the robust science that IRRI is well known for and making sure that gets into the hands of the farmers,” she said. “The creation of this position is very unique for a large international organization like IRRI and, to me, the position is very forward-thinking and interesting.”

“Most of my experience has been in the use of digital technology for international development,” she said. “How digital technology, such as internet connectivity to basic mobile phones can be used in many different sectors, from health to education to agriculture. I come from a development background, first and foremost, and have learned how to apply digital technology along the way.”  Mrs. Florey also worked with donor organizations to facilitate collaboration for making better investments in digital development.

Her professional experience has been less hampered by sociocultural biases against women. “I’ve been surrounded by and worked mostly with women,” she said. “For much of my professional career, I have worked in the global health sector, which is very well represented by women.”

But she is, as the kids would say, woke to the issue of women in computer science and engineering who have faced far more difficulties in terms of being the only women in their STEM classes and being in a very male-dominated culture.

“I’ve had similar conversations with my female colleagues who have PhDs and other advanced degrees,” she said. “If a man and a woman are representing an organization, people tend to talk to the man first even if he is more junior than the female scientist.”

She has her own brushes with gender disparity as well.

“A lot of the senior positions in the institutions I worked in like the World Bank and USAID are held by men,” she said. “In a lot of my interactions with partners, especially government agencies, there are very few women. In one country, as an example, I was the only woman out of 30 sitting in a meeting and that was very stark to me but not completely surprising.” 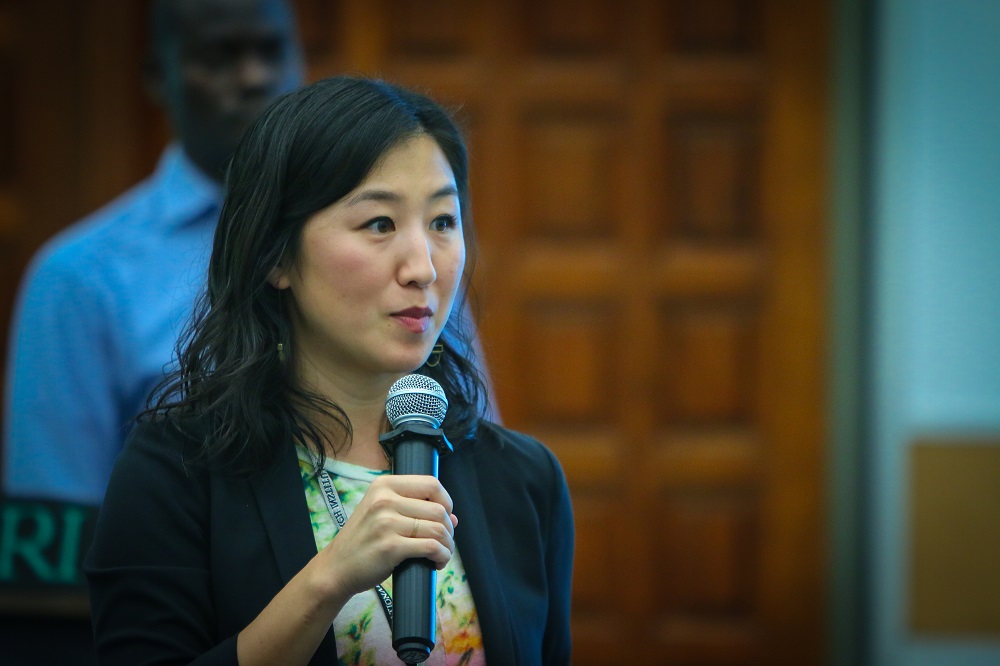 “There are a limited number of role models for women; you have to look harder to find them. If I were a young scientist or software developer I want to be able to see myself and my potential career path modeled by other similar people.” (Photo by I. Serrano, IRRI)

Closer to the impact
Mrs. Florey accepted her post at IRRI because she wanted to work more on direct implementation and work with partners doing the actual implementation on the ground rather than being a few steps removed from actual impact.

“In a lot of geographies, people have more access to mobile phones than they have to electricity or potable water,” she said. “I see a real opportunity to get information and services to people, in IRRI’s case to farmers and agricultural extension workers. I see the opportunity in digital technology to leapfrog some of those challenges in service delivery.

“I am working on a few different tools and lead specific projects. I am trying to amplify what other people are doing,” she said.  “There are a number of digital tools that have been developed at IRRI that have no relationships with each other.  I want to make sure farmers, external audiences, and potential partners know about these tools.”

The tools include Rice Crop Manager, a web-based application that provides fertilizer and nutrient management recommendations to farmers based on site-specific nutrient management; EasyHarvest, an Uber for farmers that locates the nearest combine harvester in real time using a GPS so they can access it when they need it to avoid postharvest losses; and AutoMonPH, an Internet-of-Things-based decision support tool to make better irrigation and water management decisions.

“I am involved to the extent that I am trying to think about integrating all of these pieces so that these are not just a bunch of stand-alone tools being developed,” she said. “My experience in collaboration and partnership-building will help in identifying potential partners and bring those people to know about these tools and think about the potential next steps as well.”

She is also looking at other works that her colleagues in the Geospatial Science and Modelling Group are doing. The group collects large amounts of complex agro-geo-information datasets for agricultural growth, sustainable environmental management, and improved food security.

“It’s a different type of technology but our world overlaps,” she said. “They are producing robust data sets and information so that we can get more information to different stakeholders; at the farmer level, the extension worker level, the municipal government level, and the national government level so they can make better decisions such as when to plant and harvest and  what the national rice roadmap should be. Digital technology can inform all those different levels.”

Motherhood: to be or not to be
Although she clearly earned her seat at the technology table, Mrs. Florey still feels some pressure to prove herself, particularly since becoming a new mom.

In Ms. Scientist, Brandy Yanchyk’s documentary on at the successes and challenges that Canada’s female scientists face, University of Alberta Assistant Professor Carla Prado recalled how difficult it was for her to decide to have a child.

“To have a child or have a career is something that’s a big choice,” Dr. Prado said, aware that it could negatively impact her career.

There is a prevailing perception in the tech industry that taking breaks and maternity leaves makes women outdated. It is a dilemma many women faces. A 2017 study published in the Journal of Economic Perspectives showed that, in several countries, paid leaves do adversely affect women’s career in terms of promotions, salary increases, and moving up to management.

“I was in this awkward position of starting a brand new job at IRRI and having a baby right away,” Ms. Florey said. “There were many factors in terms of my decision for me and my husband to wait to have children. I put off having a child until I was in my late 30s in part because I wanted to take to establish myself professionally before starting a family.”

Like many women, she was concerned about the issues women face when they return to work.

“I was working right after I had my baby, responding to emails and tracking project activities,” she said. “I didn’t take the full amount of maternity leave. I came back after two months. Part of it is because I am in a new job, part of it is the amount of responsibility I had. But another part, in the back of my mind, is sort of a fear of falling behind and wanting to be recognized as a committed professional to the organization.”

She does enjoy the support of the institute making it easier for her to balance her personal life and career.

“I am grateful because my supervisors have been very flexible in the time I am allowed to take,” she said. “I can start a little bit later if need be, work until 5:00 pm, go offline for a few hours to feed and put our baby to sleep, and then go back online from 8:00 pm to 11:00 pm.” 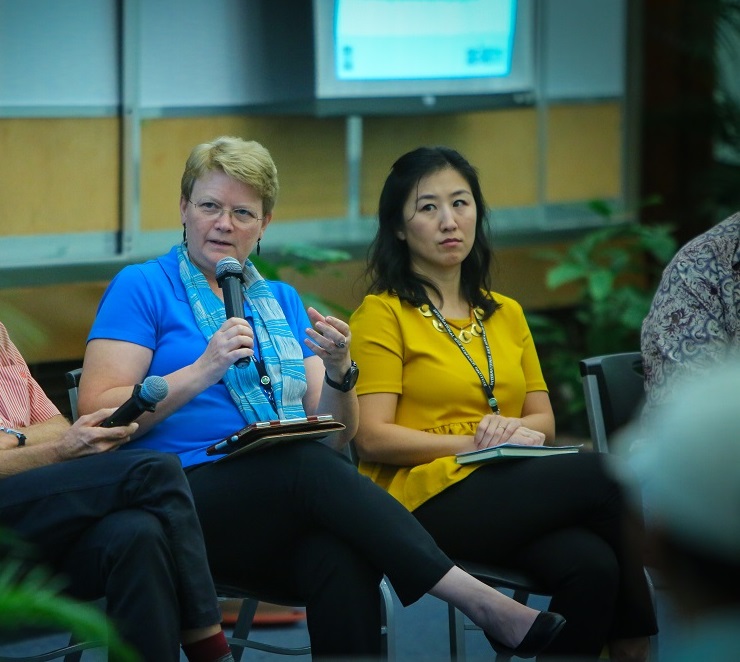 “I was surprised by the number of women scientists working at IRRI. There are a lot of strong women scientists at IRRI.” Also in photo: IRRI Deputy Director General for Research Jacqueline Hughes. (Photo by I. Serrano, IRRI)

World’s next top STEM role model
Dr. Ismahan Elouafi, a biologist and geneticist (and trained fighter pilot!), said having women in top science posts is not a luxury, but a necessity.

“I think it’s not even specific to science but in all sectors,” she said. “Part of it is that representation is important. It’s not just important to have women in positions of seniority within an institution, it’s important to have women of color and from the global south to be in those positions. There are significant benefits from diversity and not only having men in positions of authority so that you have more variety and diversity of voices.”

She clarified, however, that the most qualified person for a job should be in that job. “But as you identify those people there needs to be a very large outreach. You want to pool in an equal number of men and women and then decide.”

Having role models is also one of the five major drivers impacting girls’ interest in STEM subjects, according to a 2016 Europe-wide research conducted by Microsoft on how to get more young women into the field.

“There are a limited number of role models for women; you have to look harder to find them,” she said. “If I were a young scientist or software developer I want to be able to see myself and my potential career path modeled by other similar people. Men have many examples of that and they have no problem finding role models. For women it’s hard to see here is a scientist or a CEO who also has a strong personal life and what path she took to get where she is.”

In this regard, IRRI strives to be a women-friendly institute.

“I was surprised by the number of women scientists working at IRRI,” said Ms. Florey. “I thought there would be fewer. When I was being interviewed I spoke to Dr. Jackie Hughes, who is the deputy director general and Dr. Ranjitha Puskur, IRRI’s gender specialist. There are many others such as Drs. Sheetal Sharma, Nollie Vera Cruz, Alice Laborte, and Jessica Rutkoski. There are a lot of strong women scientists at IRRI.”

Women and girls are key players in crafting solutions to improve lives and generate inclusive green growth that benefits all. They are the greatest untapped population to become the next generations of STEM professionals—we must invest in their talent, the UNESCO stated.

By taking the Technology for Development lead at IRRI, Carolyn Florey herself became one of the role models for those women and girls.