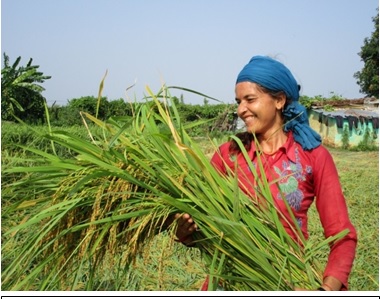 Leading by example, many farmers in the village are now following Nirmala Sapkota and her farming techniques as the changing climate continues to adversely affect small farmers. (Photo: USAID ASTV)

Manikapur Village shares a good portion of the total agricultural productivity of Nepalgunj, a submetropolitan city in midwestern Nepal. Beside the Nepalgunj Airport, Nirmala Sapkota owns a small house and 3,380 square meters of land.

The income from her rice and vegetable farm is a major source of income for the family of two adults and two children. Besides farming, Ms. Sapkota keeps a buffalo that produces milk that she sells in the nearby Ranjha market and provides manure for fertilizing her land.

Like most of the farmers in her village, Ms. Sapkota previously grew various hybrid rice varieties. Although hybrid rice has higher yields and better resistance to pests and diseases than many inbred rice, the farmers cannot use their seed from one year to another. Thus, they need to purchase expensive hybrid rice seed every cropping season.

“The cost of hybrid seeds increases every year,” said Ms. Sapkota who buys the seeds from the market. “I was left with no choice but to stop planting hybrid rice.”

Fortunately, she found an alternative in stress-tolerant rice varieties (STRVs).

These days, Ms. Sapkota has a confident smile on her face after she started growing the short-duration and climate-smart Sukkha Dhan 3 and Sukha Dhan 5 two years ago.

“Now, I have time to plant my vegetables that are getting a good price in the market after harvesting my rice,” Ms. Sapkota said. “Thanks to Sukkha Dhan, my cultivation costs were reduced and I can keep my own seeds for the next season.”

She learned about Sukkha Dhan from the District Agriculture Development Office. For the first year, she received Sukkha Dhan 3 from the office through the Accelerating the Adoption of Stress Tolerant Rice Varieties by Smallholder Farmers in Nepal and Cambodia (USAID ASTV) project. The project is funded by the United States Agency for International Development and coordinated by the International Rice Research Institute. She cultivated this variety in her small land and harvested a total of 2.5 tons of rice.

In 2016, seeing the good performance and yield of STRVs, she leased her neighbor’s land to double the size of her rice field to 0.66 hectares. She grew another STRV, the flood-tolerant Ciherang Sub1, on half of the land and harvested 2.2 tons of rice.

“The cooking quality and taste of Sukkha Dhan 3 and Ciherang-Sub1 is very good,” said Ms. Sapkota who sold 2 tons of her harvest to local traders. “I am very happy. These rice varieties are really more productive.”

This year she sold a total of 2.3 tons of rice worth over USD 1,000. Moreover, the good market price of early-season vegetables she planted after harvesting her short-duration rice crop further added to her income. Ms. Sapkota is not only satisfied with her better income but with producing her own STRV seeds instead of buying the seeds every planting season.

Best of all, many farmers in the village are now following her farming techniques as the changing climate continues to adversely affect small farmers. Like Ms. Sapkota, they are finding STRVs as a viable option to a better life.