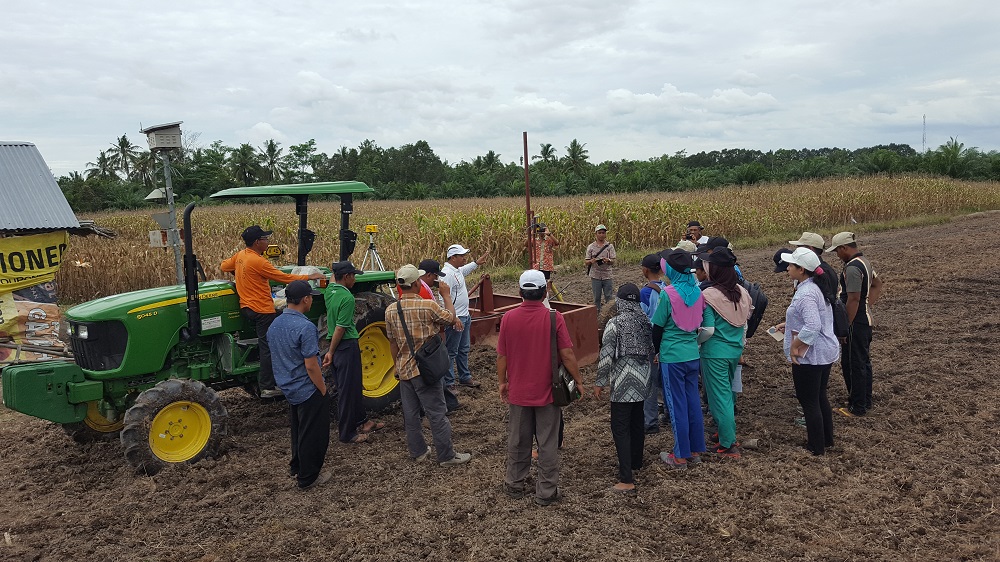 SOUTH SUMATRA, Indonesia—“Now, I and my fellow students who came here can better help our parents in running our farms,” exclaimed Dulhamid, a high school student at a specialized agricultural school in nearby Tanjung Lago. He was enthusiastically talking about his recent attendance at a demonstration of a laser land-leveling system that could improve the productivity of rice farms in the tidal swamp areas in Palembang and other parts of Indonesia.

Twenty-four farmers, extension agents, and local students attended the demonstration, held 28-29 September. It clearly showed how the technology could become a vital tool for increasing agricultural production while reducing the cost of growing rice and thus encourage its adoption.

One of the challenges that limit farmers’ rice production in Mulya Sari and neighboring villages in Banyuasin District is their unleveled fields. Unleveled rice fields consume three times more water than leveled fields. They also suffer a 5-10% yield reduction due to uneven crop maturation and higher weed infestation. However, traditional land leveling using draft animals or two-wheeled tractors are quite laborious that still leave the field inadequately leveled.

Land leveling using the laser system is faster and more effective in ensuring an even surface. In laser-leveled fields, irrigation water reaches every part of the field thus reducing waste from waterlogging and runoff. Evenly distributed water in rice fields can also control weeds so farmers can reduce their use of herbicides.

The event was organized by Closing Rice Yield Gaps in Asia with Reduced Environmental Footprints (CORIGAP) project in collaboration with the Assessment Institute for Agricultural Technologies (AIAT).

“Our goal at AIAT is to assess technologies being introduced and make recommendations for the government’s extension arm,” said Budi Raharjo, AIAT researcher and postharvest specialist. “This is part of our efforts to reach our national rice sufficiency goals and an initial step to introduce the laser-leveling technology in the country. It is also gaining a lot of interest in other provinces.”

Caling Balingbing, a scientist at the International Rice Research Institute (IRRI), conducted the demonstration and provided training on topographic field surveying and operating and maintaining a tractor.

“We want to know more about this technology and the experience of farmers in other countries, said Pak Ruwanto, a farmer from Banyuasin. “We also hope that other farmers in Indonesia can see and use this technology so we can all benefit.”

“We learned how to do the pace method as part of the topographic surveying and I was able to operate a tractor,” added Dulhamid.

During the demonstration, IRRI and AIAT introduced the concept of the Learning Alliance. This is an interactive and participatory activity that brings together different stakeholders to assess and develop ways to optimize the use of new technologies so smallholder farmers can truly benefit from them. The CORIGAP project has been using the Learning Alliance as a platform where different stakeholders with common interests can share and learn from each other’s experiences.

CORIGAP is a 4-year project implemented by IRRI and funded by the Swiss Agency for Development and Cooperation.