The adoption of stress-tolerant rice varieties in 22 districts in Nepal is leading the way to sustainable rice production and food security in the country. 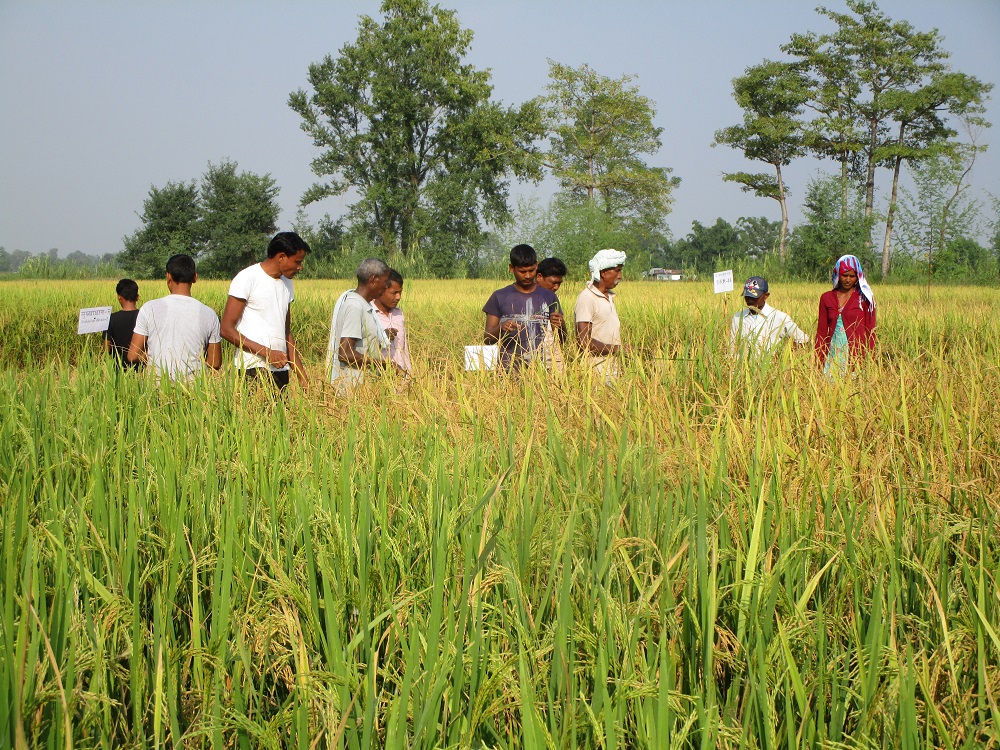 Climate change is a severe global threat that requires significant efforts to mitigate its impact. Its effects tend to be more severe in rainfed agricultural areas where people depend on the weather for their livelihood. In Nepal, rice ranks as the leading cereal crop in terms of area, production, and people’s income. It also has special cultural and religious values in Nepalese society.

Rice is grown extensively under a broad range of the country’s agroecological areas, from the lowland Terai region to the hills and mountains, and rice yield differs in irrigated and rainfed environments. A constant increase in agricultural production and productivity largely depends on the development of new and improved varieties of crops supported by an efficient system for the timely supply of good-quality seeds to farmers, according to the National Seed Vision 2013-2025, the government’s development strategy for its seed sector.

Good-quality seeds of high-yielding varieties are important to the country’s agricultural growth and for raising the living standard of Nepalese farm families. However, unless farmers have access to these seeds through an efficient seed system, the development and transfer of any new technologies will have minimal impact.

Access for success
In 2015, the International Rice Research Institute (IRRI) started the United States Agency for International Development (USAID)-funded project Accelerating the Adoption of Stress-Tolerant Varieties by Smallholder Farmers in Nepal and Cambodia (ASTV). The ASTV project aims to solve some of the problems plaguing rice productivity, reduce poverty and hunger, and increase the food and income security of resource-poor farm households through high-yielding stress-tolerant rice varieties.

Several rice varieties tolerant of flooding and drought have been released in Nepal through the collaboration of scientists from Nepal and IRRI. Despite the various challenges, the project has made significant progress with hundreds of organizations, businesses, and communities moving forward on this path in the 22 districts that make up the zone of influence in Nepal’s Feed the Future (FtF) initiative under USAID.

At a critical moment for ensuring food security in the country, both public and private institutions are helping their communities to mitigate the adverse effects of climate change.
After the havoc caused by an earthquake in 2014, the project and 15 other leading research institutions played a bigger role in ensuring seed availability of stress-tolerant rice varieties and further multiplication and dissemination.

As part of its strategic dissemination plan, seed minikits of stress-tolerant rice varieties were provided to farmers on a large scale with the assistance of the project partners who also mobilize and educate rural farmers. The minikits were used in head-to-head trials, cluster demonstrations, and seed production plots to spread awareness and give farmers access to the seeds. The scheme also provides an efficient feedback mechanism for varietal performance and other data. 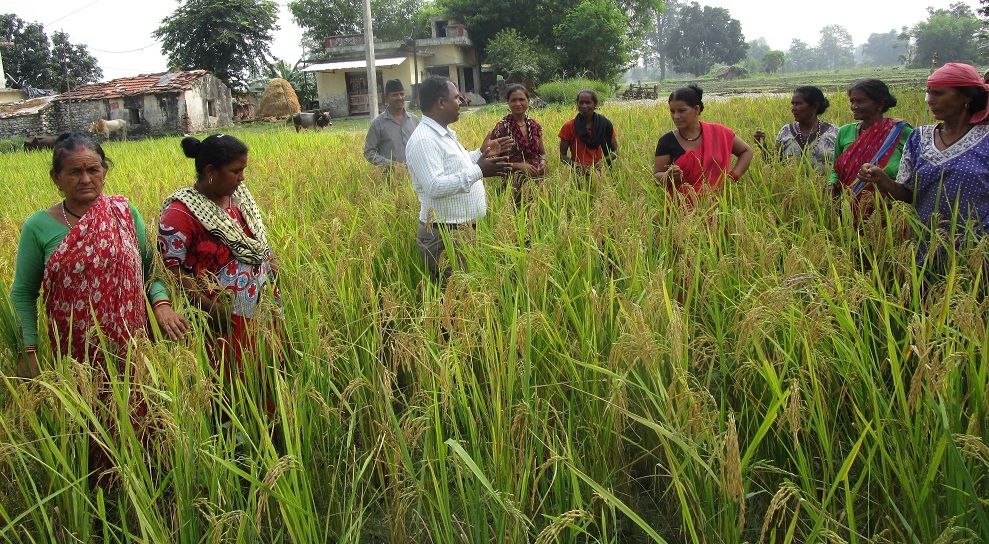 Tracking the path of farmers’ adoption
We reviewed the efforts after two years of implementation of the activities of ASTV in the 22 FtF districts.

We surveyed random 2,867 recipients of the seed minikits distributed in 2015 and 2016, a significant percentage of which were women farmers. The entire study covered 2,952 respondents in 177 village development committees. The respondents, mainly small and marginal farmers, reported cultivated rice in areas under a hectare. About 75% said that rice cultivation was their main source of income.

Focusing on adoption, 80% of the farmers reported that they will continue planting the rice variety they obtained from ASTV. Gulmi, Dang, and Banke districts have 100%, 87%, and 83% adoption, respectively. 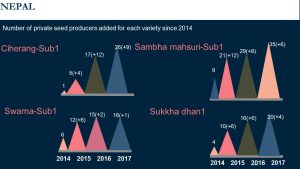 Number of private seed producers added for each variety since 2014

About 75% of the farmers reported liking flood-tolerant Ciherang-Sub1 for its high yield and short duration. The most common reason for liking Sawa Mansuli-Sub1 (Sambha Mahsuri-Sub1) is its good taste, which increases its commercial value. Similarly, most farmers liked Swarna-Sub1 for its high yield, good taste, and good straw quality. Farmers liked the Sukkha dhan varieties (1 to 5) for their short duration, drought tolerance, and high yield. Among all the varieties, Sukkha dhan3 received the most votes for producing high yield even under drought conditions.

Most households were positive about the stress-tolerant rice varieties and mentioned that they will use them for home consumption because of their higher cooking quality.

In a comparison of yield between the stress-tolerant rice varieties and popular varieties grown by the farmers, Ciherang-Sub1 had a significant yield advantage over most other local varieties such as Radha4, Swarna, and Ranjit. Similarly, Swarna-Sub1 and Samba-Sub1 yields were significantly higher than those of other local cultivars. 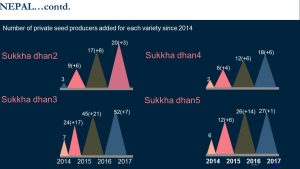 Under normal conditions, drought-tolerant varieties Sukkha dhan1, 2, 3, and 4 had significantly higher yields than local rice varieties such as the widely grown Mansuli. The varieties produced stable yield under drought conditions, with a yield advantage of 1.0 to 1.7 tons per hectare over other popular varieties. 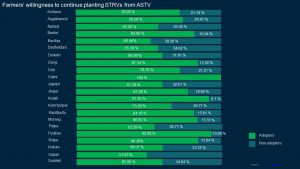 Farmers’ willingness to continue planting STRVs they received from ASTV

ASTV also ensured the availability of seeds and provided farmers, farmers’ associations, and women’s groups with training on quality seed production to improve the quality of informal seed production. A total of 4,259 metric tons of seed of stress-tolerant rice varieties were produced through the formal and semi-formal system in the 2016 kharif season. These seeds were used during the following kharif season, benefiting 180,356 farm households.

ASTV has made an impact in terms of the adoption of stress-tolerant rice varieties among farmers and in establishing a strong network of partners. It is also encouraging to see the involvement of the private sector in promoting and disseminating the rice varieties and ensuring availability of the varieties preferred by the farmers in the region.
___________
Mr. Sharma is an M&E specialist in the Stress-Tolerant Rice for Africa and South Asia (STRASA) project in South Asia, Dr. Tripathi is a scientist in IRRI-Nepal, and Dr. Singh is the South Asia regional coordinator for STRASA.