A women’s self-help group in a small village in Odisha leads the way in innovative learning that could lead to higher benefits and profits for farmers. 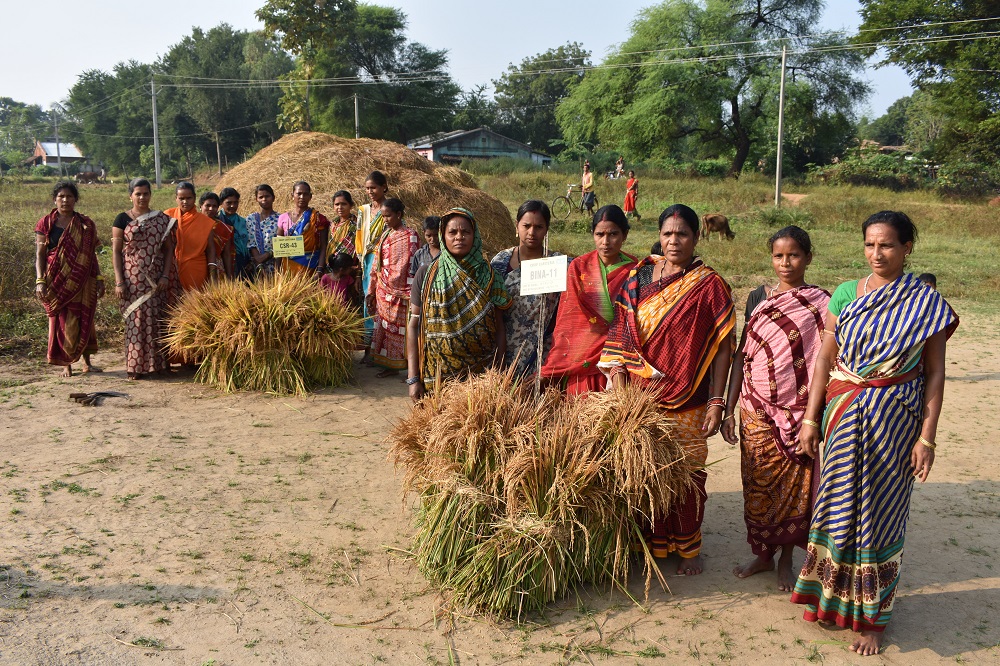 Although rice breeding has undergone revolutionary changes, the new high-yielding and more robust varieties have yet to reach many of the small farmers who stand to benefit most from them. In addition, small and marginal farmers do not readily adopt the varieties and technologies developed by scientists even if these are available to them.

One factor in the slow rate of adoption is that farmers do not see the significant advantages in making that change. It is one thing for scientists and extension agents to champion the characteristics of a new rice variety but to see with their own eyes how many more benefits and profit farmers can obtain by growing that variety is quite another.

To bridge that gap, the government of Odisha and IRRI implemented a project for increasing the productivity of rice-based cropping systems and farmers’ income in the state. The collaboration uses innovative extension approaches such as rice farming “evidence hubs.” Organized at the district level, evidence hubs provide farmers with proofs of the advantages of replacing older varieties with newly released stress-tolerant rice varieties. The method is known as evidence-based learning and it is revolutionizing the local varietal selection practices of local farmers.

Women farmers as in-field scientists
Kalahandi District is the seventh-largest district in Odisha. It is part of the Kalahandi-Bolangir-Koraput region, which is one of the poorest and most underdeveloped regions in the state. The area experiences wide variations in rainfall year after year and is categorized as drought-prone. Dry spells may occur even during the monsoon—the main cropping season—and cause frequent crop failure.

Because farmers are pivotal in achieving better varietal selection and a higher adoption rate, IRRI scientists are working with Maa Thakurani, a 17-member women’s self-help group in Gananathpur in Kalahandi, to enhance understanding and knowledge through evidence hubs.

In the 2017 kharif season, the members of the Maa Thakurani group established and managed a “Crop Cafeteria” with 19 rice varieties comprising old and popular varieties grown by the local farmers and stress-tolerant rice varieties that could potentially increase the resilience of the farmers and stabilize grain production against climatic shocks. The Crop Cafeteria provided the women with the opportunity to carry out a systematic comparison of the varieties, identify the good traits of each, and, eventually, select their most preferred varieties.

They maintained multiple replication plots, managed each plot, and followed similar management practices for all the varieties. To compare the important yield parameters, they followed a staggered pattern of sowing so that the flowering of the different varieties would coincide.

The intensive and season-long exercise involved collective management, scientific learnings, and information and knowledge sharing through a participatory mode. This learning process led to collective evaluation and varietal selection, scientific understanding, and bargaining for consensus by the women.

Through detailed observation, accurate measurements, and discussions, the group confidently selected seven modern rice varieties (BINA dhan-11, DRR-42, DRR-43, DRR-44, DRR-46, BRRI dhan-71, and BRRI dhan-75) over the local varieties grown in the Crop Cafeteria. The members selected these varieties after determining their yield advantage of 1,250 kilograms per hectare over the locally grown varieties. The group was unanimously satisfied with the very good yield of DRR-44 and BINA dhan-11 even with the low rainfall and frequent dry spells during the season.

With their growing confidence from their continuous evidence-based learning, the group members decided and planned to plant stress-tolerant rice varieties BINA dhan-11, DRR-44, and BRRI dhan-75 for grain as well as seed production in the coming seasons. 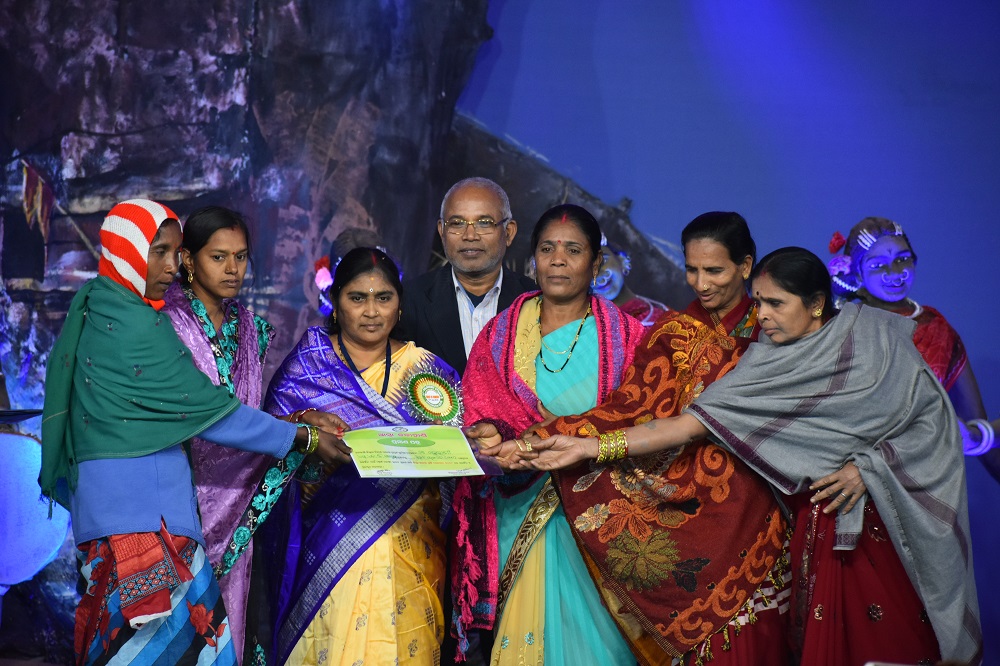 For establishing a rice farming evidence hub that has proved instrumental in cultivating, comparing, and identifying many potential varieties of stress-tolerant rice for the region, the Maa Thakurani group was recognized at the 20th Kalahandi Utsav, Ghumura in Bhawanipatna. The annual event is a platform for art, culture, music, drama, literature, and handicrafts. Mr. Prahalad Sahu, deputy director of Agriculture in Kalahandi, presented the award to the members. (Photo by Pradeep Kumar Sethi)

A platform for multiplying the impact
The Crop Cafeteria also acts as a medium for mainstreaming the women farmers’ group and the preferred resilient, higher-yielding rice varieties.

The women meticulously organized a varietal exposition in which they engaged farmers from surrounding villages, local dealers, government officials, extension officers, agricultural researchers and scientists, representatives from nongovernment agencies, and public and private stakeholders in the seed sector. Visitors to the hub were able to observe the varieties “in action” over the entire cropping season and learn about the women’s experiences and opinions.

Through the expo, the women farmers were able to discuss how they arrived at their decision for selecting appropriate traits and varieties for their area.

“It was an opportunity to interact, exchange ideas, provide feedback, and build rapport with them,” said Hemalata Sabar, the secretary of the Maa Thakurani group.
The end goal was to get the seed producers to include the seeds of their chosen varieties in their catalog and make them readily available to farmers.

To encourage more innovations on the ground, Maa Thakurani was recognized by the government of Odisha for its contribution in demonstrating new varieties through innovation and collective participation.

“The evidence hub has given us a platform for learning about how to observe, make comparisons, and witness the results and build choices for making the right decisions,” said Mrs. Sabar.

It is also giving the local farmers in Gananathpur renewed hope for a better future.
_______
Ms. Nayak is the lead agricultural research and development specialist in the Seed & Delivery Systems Cluster at IRRI India. Ms. Saksena is a communication specialist for the Stress-Tolerant Rice for Africa and South Asia project in India, and Dr. Dar is the lead of the Seed & Delivery Systems and Germplasm Evaluation Cluster at IRRI.