A lifelong interest in Asia has propelled a business model and value chain specialist for the International Rice Research Institute (IRRI) into a meaningful career as a consultant on food security. He now helps farmers in the developing world devise ways to safeguard their crops after harvest.

His high school counselor suggested that he go straight into science or engineering. But Alfred Schmidley, a 1985 graduate of Bradley University in Illinois, was in no rush to make such a decision and would soon consider other ideas. “When I went to college, the world around me suddenly got a whole lot bigger—with some apprehension, mind you, as I began trying to fill in all the gaps,” he recalled with a laugh. “I found it all very complicated!”

A native of Beloit, Wisconsin, Schmidley transferred from a state university to Bradley, where he found class size and the faculty more welcoming. Interested in global issues, particularly Asia, he soon met John Howard, then director of the International Studies Program, now professor emeritus. “Dr. Howard was very approachable and supportive,” reminisced Mr. Schmidley. “As soon as I met with him, I realized that Bradley might be small in size, but it came with some really big perspectives about what I could explore academically. International studies seemed right for me.”

Another favorite Bradley faculty member was Robert Fuller, Caterpillar Professor of philosophy and religious studies, and perhaps a major reason why Schmidley lives and works in Asia today. “He was inspiring because he brought new perspectives—of people and culture—into the classroom. “Religions of the East was one of my favorite courses,” Mr. Schmidley recalled. “This influenced me to backpack my way across Asia after graduation—before taking up Asian languages and related studies in graduate school.”

While at Bradley and busy with international studies, he found the time to plunge into dormitory life, eventually becoming a resident assistant. Apart from the financial assistance, it was a great way for him to meet people, both students and others associated with the university community. He supervised freshmen in all-male dorms.

“Freshmen floors assigned to resident assistants were seen as more challenging,” he added with a smile. “In hindsight, this provided me with a lot of formative experience in people management. I learned to deal with all sorts of people in many different situations.”

After completing postgraduate business management and language studies, and working more than two decades in Asia, Mr. Schmidley is currently a business model and value chain specialist for IRRI, where he happily combines his interests in Asia, business management, and rural development. Since joining the Institute in 2009, he has worked to help developing country farmers improve their food security, particularly in rice.

Rice? Yes, that’s right. Rice is the main staple food for most countries in Asia (and increasingly in Africa). Any threat to this cereal crop can jeopardize global food security and put millions of people at risk of malnourishment or even starvation. An increasing world population means that rice production must increase by 114 million tons by 2035, but farmers must achieve this on a decreasing amount of available agricultural land and under significant threats from climate change. A “second” Green Revolution has been called for, and, in fact, in the views of some, has already been under way for several years.

“Green Revolution” is the name given to a series of innovations in agricultural research and technology development that started in the 1960s. This effort increased agricultural production worldwide, especially in the developing countries of Asia. IRRI, established in 1960, championed the scientific advances in rice research that would ultimately reduce poverty and hunger, especially prevalent at that time in much of Asia.

Mr. Schmidley’s specialty at IRRI is working downstream to develop sustainable business models for the adoption and delivery of new technologies to farmers. This includes postharvest, when preventable losses of 25% or more result from not getting rice and other crops out of the field and processed in a timely manner. If these losses are not prevented, many poor farm households will be robbed of both precious food and income.

It is risky enough to get a rice crop to the harvest stage. From actual harvest and beyond, the risks continue. Once the paddy (or “raw rice”) is ready for harvest, it should be cut and removed from the field for threshing, drying, and safe storage, ideally within 24 hours. But all too often, there’s a shortage of labor or a lack of efficient technology to achieve this. Delays result in physical grain loss to farmers and loss of grain quality to others in the rice production chain. In many developing countries, harvest and postharvest operations are done by hand, often by women. All the required operations are difficult to carry out in a short time and so the harvested rice crop often becomes wet and rots or is eaten by pests. 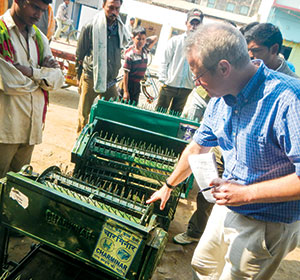 Before joining IRRI, Mr.Schmidley worked for Briggs and Stratton Corporation, a Wisconsin-based small engine manufacturer, where he held many business development postings in Asia. In this dynamic region, he found that a great need for agricultural mechanization provided many new business growth opportunities. China and Southeast Asia became his major focus aided by his post-Bradley Chinese language studies and an MBA from the University of Queensland in Australia.

“Asia is an extremely diverse region,” explained Mr. Schmidley. “Finding new market opportunities to help farmers mechanize really captured my imagination.” It was during this time that he began experimenting with cross-sector partnerships and more holistic system innovation models for creating value and capturing opportunities for farmers and other agricultural sector players.

“The traditional way of marketing in developed Western countries is very linear, in which one offers products and delivers them through an established distribution network to customers,” he said. “In developing countries and emerging markets, however, this structure generally does not exist or it is immature. In addition, the end users are not aware of their options.” This requires more creativity and harnessing of knowledge and resources from government agencies, research institutes and universities, and NGOs for raising awareness about new opportunities among farmers and industry players.

“Lessons about the need for cross-sector collaboration helped me prepare for my current role at IRRI,” Mr. Schmidley said. Now, his business model approach at IRRI involves platforms called “learning alliances”—groups of public, nongovernment, and private sector interests that, along with farmers, work together to improve food security and livelihoods in agriculture. The typical target is a smallholder rice farmer, someone who farms a hectare of land or less.

“Farmers by nature can be very resourceful and innovative because many have so little to work with,” he said. “Give them sufficient knowledge and access to technologies to choose from and they’ll define what they need.” However, successful outcomes require a whole “business system”—including farmers, agricultural extension, and industry—to function better by fostering learning among these different parties to support local needs and sustainable development of markets.

In India, a primary target for this approach has been self-help groups (SHGs) made up of women. Here, women farmers are organizing themselves to aggregate resources for solving identified problems and exploring their solutions. This makes sense since women are increasingly involved in farm work, including postharvest processing, because the men are, more and more, taking up work in cities or nonfarm sectors. Up to now, women had often been seen as having little economic value as they were involved mostly in the drudgery of household-level processing. However, this is changing and Schmidley’s business model approach is now treating the entire farm family as a business unit.

Guided by a local nongovernmental organization, members of a women’s self-help group in Bihar, India, take up open-drum threshing. The women tend to their own families’ threshing first, then hire out their services to earn income.

For example, a little more than a year ago, researchers who are part of the Cereal Systems Initiative for South Asia (CSISA), funded by the Bill & Melinda Gates Foundation and USAID, started working with NGOs and the SHGs in Bihar, India. Bihar is regarded as one of the country’s poorest states. Farmers were incurring huge postharvest losses because of delays, a lack of labor during the peak harvesting period, and little awareness of options.

“Through local NGOs, we helped pilot and train the SHGs about basic options for mechanical threshing that both reduced delays and prevented losses,” said Mr. Schmidley. “We also provided them with potential business opportunities for offering contract services to other farmers in need. Our business model showed that the savings to farmers more than offset the cost of services, not to mention that it recovered much more rice from the farmers’ harvests.”

However, this required a longer process of learning about various options and adapting them to meet local needs. In Bihar, several options were tested in a participatory fashion using this learning platform, involving local machine fabricators and government and nongovernment agencies. “In the end, we came up with an improved version of a basic threshing machine by adding wheels and a handle so it could be moved from farm to farm over muddy fields to aid in these income-generating services,” Mr. Schmidley recounted. The initiative has been such a success that other SHGs now operate their small businesses by providing services or renting a threshing machine to small-scale farmers in the region.

Bradley helped me get to this stage

“My current goal in all this is simply to help poor farmers get more rice out of their fields and into rice bowls around Asia,” concluded Mr. Schmidley. “Looking back, my Bradley experience was very formative to what I’m accomplishing at this stage of my career. The broad-based education I received at the university allowed me to explore a world of opportunity and challenges. It helped me lay a solid foundation for the many exciting things I’ve achieved and experienced in both the private and public sectors.”

Ms. Brolley is assistant director of Marketing and Publications at Bradley University.

Printed with permission from Bradley University, this story is based on a feature that appeared in the Summer/Fall issue of Bradley Hilltopics.