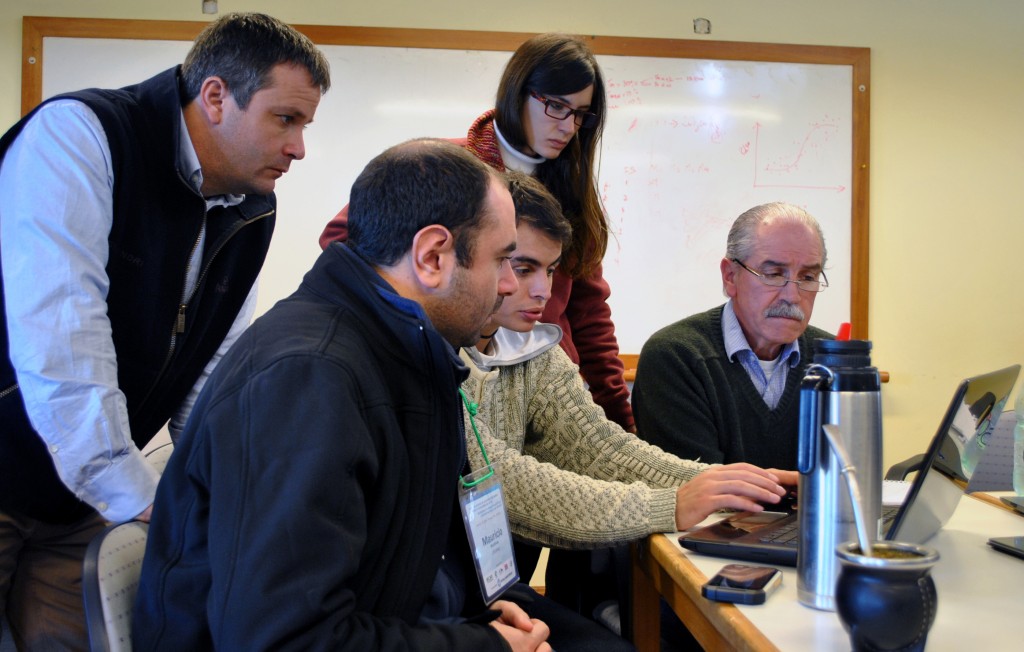 ABOUT 30 representatives from rice-growing companies, mills, and research centers from Uruguay, Argentina, Chile, Brazil, and Colombia met in Treinta y Tres, Uruguay to learn about the big data approach. (Photo by CIAT)

It was definitely not love at first “byte.” Gonzalo Rovira had carefully prepared for this first date. Years of experience assured him that all would go well. But when the big moment arrived, he felt intimidated.

His date was a platform named “R,” which is widely used by scientists and statisticians for data analysis. Mr. Rovira had a long story to tell, which goes back 20 years, when he first took up responsibility for compiling information on planting dates, irrigation time, herbicide applications, varieties, yields, and other rice data.

Fascinated by data
Mr. Rovira is the agronomist who heads the technical department of Coopar, S.A., an agroindustrial rice mill in Uruguay. He jealously guards the rice information in a trove of Excel files. Thanks to this popular application, he can process data for more than 20,000 hectares and provide the land’s owners, the partners in Coopar, with valuable information that helps them optimize rice production. “We were making good use of the information, but we knew that behind these data, there was a lot more,” said Mr. Rovira, who runs the group of five technicians charged with capturing information from a large proportion of Uruguay’s rice growers. Working sometimes with nothing more than a notebook or a piece of paper, he has fed the Coopar database constantly for 2 decades. 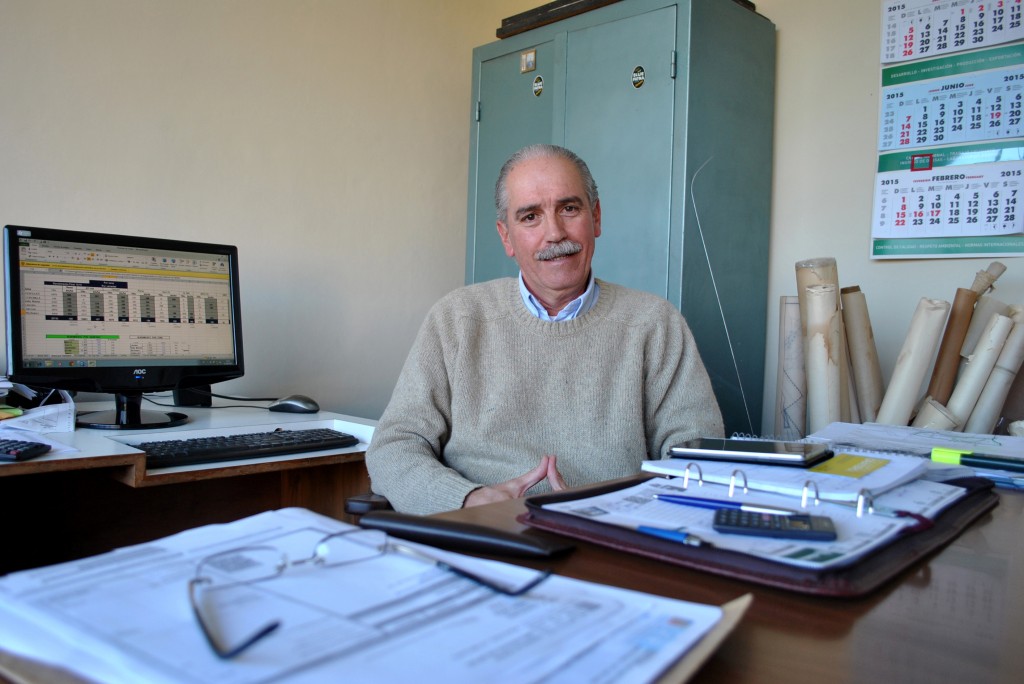 Gonzalo Rovira, technical manager at Coopar, S.A., Uruguay, has been working with production data for the past 34 years. (Photo by CIAT).

He and 25 other colleagues representing rice producers, millers, and research centers in Uruguay, Argentina, Chile, Brazil, and Colombia gathered recently at Treinta y Tres, Uruguay, the rice capital of this gaucho or cowboy country, for a workshop on big data analysis for commercial rice production.

The objective of this week-long event—organized by Center for Tropical Agriculture (CIAT) as well as several national and regional partners with support from the World Bank— was to present and promote the use of new techniques for analyzing agricultural information. The challenge for participants in this big data feast was to get to the bottom of information on one of Latin America’s most important food crops.

An approach whose time has come
Natalia Queheille, a technical adviser for the Uruguayan Rice Growers Association was among the participants. She brought along 18 years of information condensed into a large number of spreadsheets. After carefully sifting through the data and carrying out what experts call “data mining,” Ms. Queheille and her colleague Fernando Pérez, who works for Uruguay’s National Institute of Agricultural Research (INIA), began to see relationships between figures joined by strange codes and symbols—the same dashes, asterisks, equal signs, brackets, and periods that had intimidated Mr. Rovira in his first encounter with the tool. An approach whose time has come The big data approach seeks to improve decision-making in agriculture through the use of advanced methods to analyze large amounts of information from farmers’ fields. But is it the right time for this approach in agriculture?

Erick Fernandes, who serves as an advisor for programs on climate change, agriculture, and forestry in the World Bank, believes it is. “Previously, new information technology wasn’t our best ally,” said Mr. Fernandes. “But now it enables us to bring together and analyze information, taking advantage of new capacities in research centers and farmers’ willingness to share their data, with the aim of finding more effective ways to improve crop production systems, which is vital not only for Latin America but the whole world.” Daniel Jiménez, agronomist and data scientist at the Colombia-based CIAT, agrees with the World Bank adviser.

“Previously, computers couldn’t handle the methods we use for big data analysis, which are based on artificial intelligence and machine learning,” said Dr. Jiménez. “But now, we’re able to use these methods, and more people believe that this information, despite being beyond our control, offers a great opportunity to improve decision-making in agriculture, resulting in production systems that are more resilient in the face of climate change.”

Data champions
The information brought to the big data workshop by Daniel Kruger, who works for Argentina’s National Institute of Agriculture and Livestock Technology (INTA), is a treasure. One of the three databases that INTA maintains has climate information for the last half century.

Mr. Kruger, an expert in rice crop protection and management, recognizes the value of giving this information the careful refinement that it needs. “It’s really important to have data on climate and crop management for 10 seasons or more, because this enables us to determine what has happened in the past and project the future,” he said. Though he already knew about the R platform, the workshop helped him discover its full potential. Uruguay, Chile, and Colombia are also pioneers in building databases on rice crop management, yields, and climate. The records of the rice industry, producers, and national research institutes in these countries include data going back more than 35 years.

Colombia and beyond
CIAT’s first experience in bringing the big data approach to the rice sector took place in Colombia. Carried out in collaboration with the country’s National Rice Growers Federation (Fedearroz), this analysis led to new crop management recommendations that are helping farmers boost yields and make their crops more resilient. The analysis involved large amounts of data provided by Fedearroz, including information from annual national rice surveys together with harvest monitoring records and the results of agronomic experiments, particularly on planting dates. Researchers also took advantage of agroclimatic forecasts generated by a project on climate and Colombia’s agricultural sector— led by CIAT with support from the Ministry of Agriculture and Rural Development—as well as weather data provided by Fedearroz and the Colombian National Institute of Hydrology, Meteorology, and Environmental Studies (IDEAM). In recognition of this novel research, the United Nations Global Pulse selected it to be one of two winners of the Big Data Climate Challenge, which was awarded during the UN Climate Summit held in September 2014 at New York City. The research won further recognition from the World Bank, which is supporting CIAT’s effort to replicate the Colombian experience elsewhere in Latin America.

“Agricultural organizations are ready for this approach, so we at CIAT together with the community of users of big data techniques have an important responsibility to share our experience,” said Sylvain Delerce, who works with CIAT’s big data team. “In this effort, the cooperation of organizations like the Latin American Fund for Irrigated Rice (FLAR) and International Research Institute for Climate and Society is key.”

But the idea is also to take the big data approach beyond Latin America. “We’re talking about organizing an event that involves Latin America and Africa to share the work taking place and to show how big data can help governments with their planning and investment in agriculture,” said Holger Kray, a principal agricultural economist with the World Bank.

2 become 1
As the cold winter hours and days passed during the big data workshop, which was held at INIA’s facilities in Treinta y Tres, Mr.Rovira became captivated by R’s charm. By the time all was said and done, the 59-yearold agronomist and R had practically become one.

Back at his rice mill, Mr. Rovira will keep on urging technicians and farmers to share their data after every harvest. He’ll also talk with them about which varieties are better adapted and which aspects of the climate or soil or crop management have the most impact on yields. His goal will be to detect tendencies and possible dangers—but now with valuable aid from R, his new found life companion.

Ms. Varón Molina is communications coordinator for Latin America and the Caribbean at CIAT.