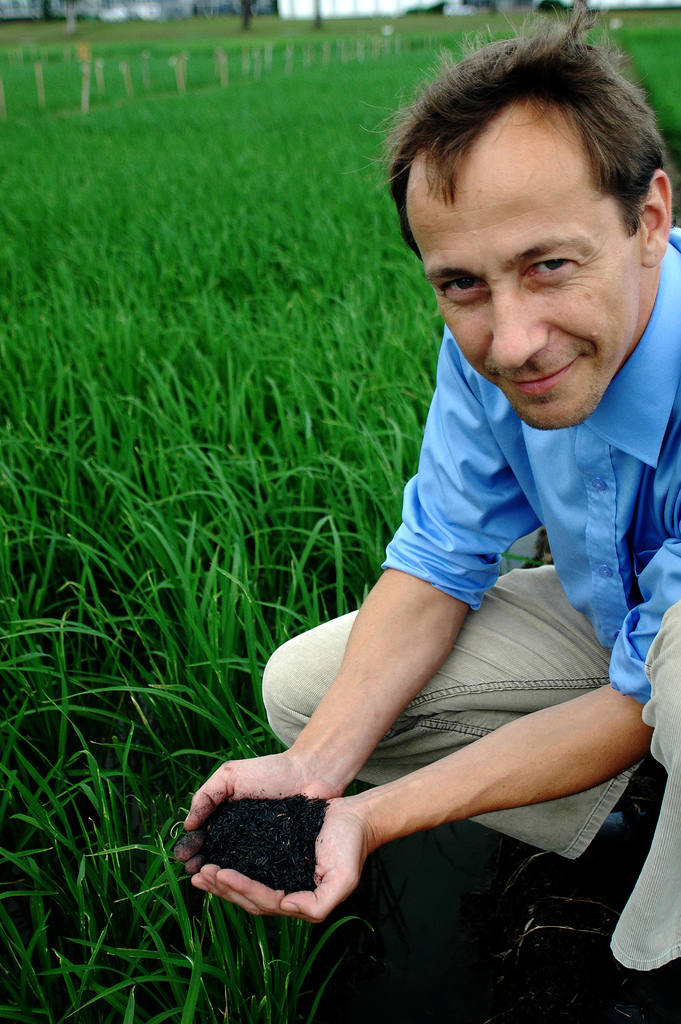 Dr. Haefele holds a pile of biochar—essentially charcoal—that has been produced from rice husks. (Photo by Jose Raymond Panaligan, IRRI)

In the 1870s, scientists exploring Amazonia in South America made an unusual discovery. Working independently, James Orton, Charles Hartt, and Herbert Smith described patches of black or dark brown soils, varying in size from 5 to more than 300 hectares, within a landscape otherwise typified by highly weathered reddish or bleached soils.

A detailed report from Smith, a geologist, characterized these “dark earths in Amazonia” as having a top-layer of a fine, dark loam, up to 60 centimeters thick. He also described them as the best soils of the Amazon, producing much higher crop yields than surrounding soils, and speculated that they owed their fertility “to the refuse of a thousand kitchens for maybe a thousand years.” That they were human-made was indicated by the abundance of fragments of Indian pottery that “cover the ground … like shells on a surf-washed beach.”

Despite the unusual nature of these findings, they initially failed to excite many scientists. Almost a century later, however Wim Sombroek, a renowned Dutch soil scientist, sparked international interest by including several pages on the “terra preta” (black soil) and “terra mulata” (brown soil) in his influential 1966 book on Amazon soils.

Several studies have since confirmed that the dark color of terra preta and terra mulata is caused by the incorporation, by humans, of black carbon (also called biochar)—incompletely burned organic matter such as charcoal. The soils were created by Amerindian populations 5002,500 years ago and some of the carbon in terra preta soils dates back to 450 B.C. Their high fertility compared to surrounding soils is attributed to the high levels of soil organic matter (which includes biochar), higher nutrient concentrations, high nutrient-and moisture-holding capacity, and lower acidity. Amazingly, the soils have generally sustained this fertility to the present despite the tropical climate (in which soil organic matter tends to rapidly degrade) and frequent or periodic cultivation.

But what has all this to do with rice in Asia? Terra preta and terra mulata are limited to Amazonia, they are not used to grow rice, and they represent a technology predating modern agriculture. The answer is that people started to wonder whether this ancient indigenous technology could offer solutions to some of the problems of modern agriculture.

Poor soils comparable with soils in Amazonia can be found in tropical regions around the globe, including Asia, where they are—unfortunately for farmers—depressingly abundant. Such soils benefit greatly from the incorporation of organic matter but its rapid decomposition in the humid tropics makes this a very labor-intensive and short-lived solution.

Addition of biochar to soils has similar positive effects—it increases nutrient availability, boosts nutrient-and moisture-holding capacity, and contributes plant-available nutrients—and is reported to last for centuries. If researchers can confirm this much-delayed decomposition in modern agricultural systems, biochar could contribute to sustainable production increases in some of the most disadvantaged agricultural environments, which are frequently characterized by very low yields and widespread extreme poverty.

The delayed decomposition of biochar could also help with another, more recent problem. It is widely agreed that global climate change is related to an increase in atmospheric carbon dioxide (CO2) concentration. If some of the atmospheric carbon fixed by plants could be locked up in soils (a process known as carbon sequestration) instead of being returned to the atmosphere through decomposition, the buildup of carbon in the atmosphere could be slowed. And, in flooded rice soils, where the decomposition of organic matter produces methane—30 times more potent as a greenhouse gas than CO2—this effect would be even greater.

This sounds very exciting—but can it be done? To start with, the amounts of biochar needed are enormous. Agronomic trials have achieved good results with biochar applications equivalent to 8 tons of carbon per hectare. The top 30 cm of terra preta contains more than three times as much carbon from biochar—an average of 25 tons per hectare. Assuming a biomass carbon concentration of 36% (typical for rice straw) and carbon loss during charring of 50%, to obtain even the 8-ton level, 44 tons of dry biomass (plant matter) per hectare would need to be converted into biochar. To reach the 25-ton terra preta level, 138 tons of dry biomass is required.

In most Asian rice lands, the only feasible source for such large quantities of biomass is rice residue left over after harvest and milling. The total amount of rice residue produced each year in Asia is estimated at 549 million tons of rice straw and 110 million tons of rice husks. Rice residue is used for several purposes (such as organic fertilizer, fuel, fodder, and building material), but its use is dwindling. Today, it is often perceived as more of a problem than a valuable resource. Worse, the most convenient way to eliminate rice residue, field burning, is a waste of resources and causes severe air pollution in some regions. 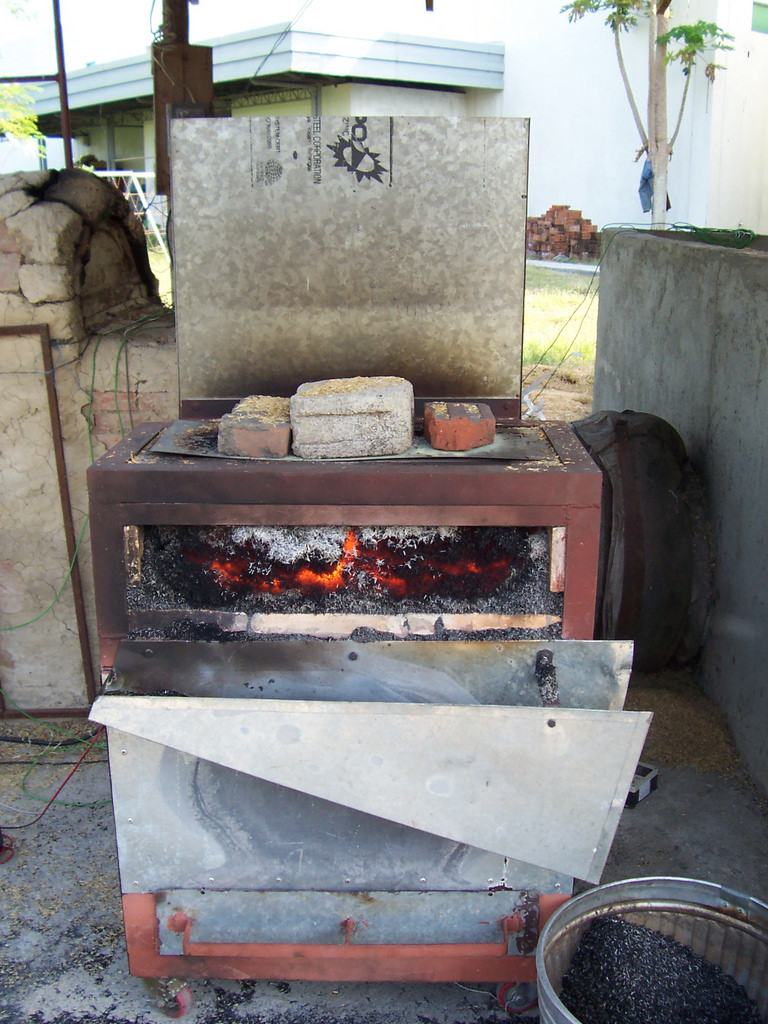 This leads to another question. Usually, biochar is the product of burning at low temperatures (280–500

°C) and restricted oxygen supply. Consequently, local biochar production by farmers in simple earthen mounds or pits could also cause considerable air pollution. However, relatively clean biochar production from rice husks can already be achieved with, for example, an improved rice husk furnace like the one pictured (above).

Developed at the International Rice Research Institute (IRRI), this type of furnace produces carbonized rice husks as a by-product of the paddy drying process. Some large rice mills in Thailand have already perfected this approach. Using rice husks to produce energy and biochar simultaneously, these mills reduce their fossil fuel bill and carbon emissions and sell the biochar by-product to producers of bio-fertilizers. A similar solution under development is the use of pyrolysis—decomposition caused by heat in the absence of oxygen—of biomass for energy production where biochar is a by-product.

These examples also show that biochar from rice residues is already used in many Asian countries. In Japan, biochar from rice husks (called kuntan) has been used in agriculture for a long time (mainly for seedbeds and as a soil amendment for upland crops and orchards). Use of biochar from rice husks as an additive to the culture medium of ornamental plants and in vegetable gardens is common and several nongovernmental organizations promote the use of it in organic farming.

It appears that biochar can increase the “greenness” of rice-based systems and that it can be integrated into existing rice production. Especially on bad soils, it offers new opportunities to sustainably improve system productivity and farmer livelihoods. Applied on a larger scale and beyond unfavorable environments, it could also reduce the negative effect of rice-based systems on the global climate. And, if the use of rice residues for energy and biochar production is combined, rice producers, rice consumers, and the environment could all profit. Much research remains to be done, but the possible prize seems worth the effort.