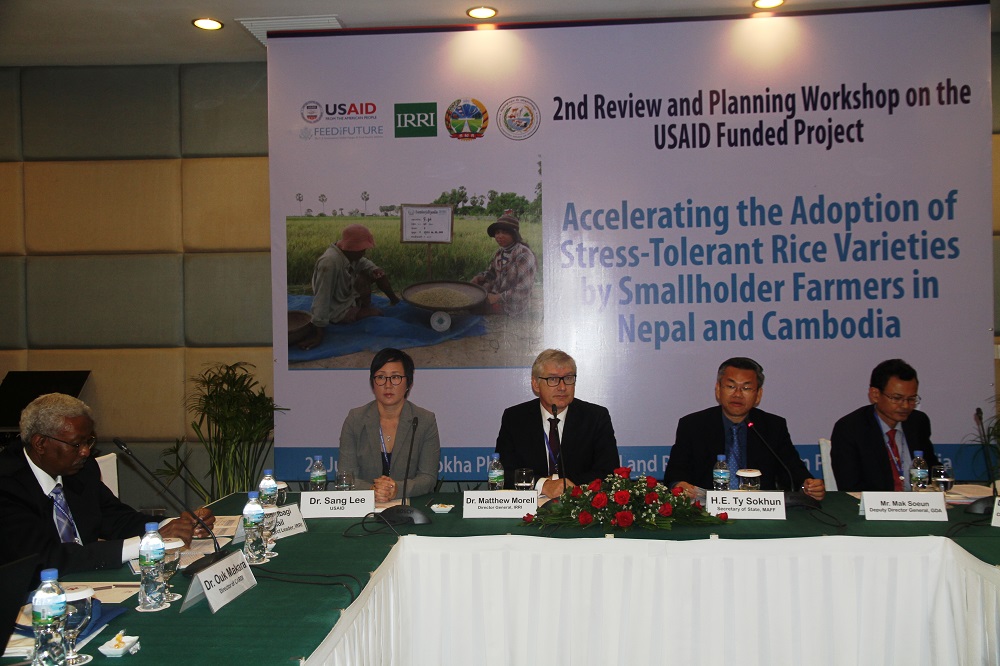 PHNOM PENH, Cambodia—The farmers’ adoption of new climate-smart rice varieties and technologies is  progressing steadily, according to the 2nd annual review and planning of the project, Accelerating the Adoption of Stress-tolerant Rice Varieties by Smallholder Farmers in Nepal and Cambodia (ASTV) on 28 July.

Record-breaking temperatures and severe drought are wreaking havoc on the country’s agriculture sector in the past few years, according to the Phnom Penh Post. In April, Prime Minister Hun Sen urged Cambodians to conserve water and ordered government agencies to provide relief to the 18 provinces affected by droughts. However, the country has also suffered from frequent widespread flooding.

“Our citizens face twin problems—one is from floods and one is from droughts,” H.E. Hun Sen told Radio Free Asia.

Many Cambodian farmers are caught between the two extremes. The majority of lowland farmers in Cambodia grow only a single crop annually since they depend on rainfall. The increasingly erratic rainfall in recent years due to climate change has also adversely affected the country’s crop production. In addition, most farmers still rely on traditional agricultural practices and seeds.

The ASTV project seeks to reduce poverty and hunger and increase food security and income of poor farm households in its target countries by introducing high-yielding climate-smart rice varieties and technologies. The project, which is coordinated by the International Rice Research Institute (IRRI), also aims to strengthen the research and delivery systems in Cambodia and Nepal.

“The varieties being developed and deployed through this project are expected to increase and sustain productivity and provide insurance to farmers to take better care of their crop and invest in inputs for more produce and higher income, despite current weather and future adversities of climate change” said Dr. Abdel Ismail, ASTV project leader and principal scientist at IRRI.

“I am pleased that the ASTV project focused on developing and deploying high-yielding, stress-tolerant varieties to increase farm productivity and resilience to climate change,” said H.E. Ty Sokhun. He also commended the strengthening of the local seed systems in Battambang, Siem Reap, Kampong Thom, and Pursat Provinces in the Tonle Sap Region covered by the Feed the Future initiative of the United States Agency for International Development. ASTV is part of the Feed the Future Program, a global hunger and food security initiative of the U.S. Government.

“IRRI is committed and engaged with the Cambodian Government to improve the rice sector and the well-being of rice farmers in Cambodia,” said Morell. He highlighted the impacts of the stress-tolerant varieties recently developed by IRRI in South Asia, and these improved varieties are being delivered for evaluation and commercial use in Cambodia

“We will ensure these varieties are made available to those who need them the most,” Morell added.

Read the article on the 2016 ASTV review and planning for more details.