After understanding the dismal situation of the paddy farmers, a plan was drawn to revive the community’s agriculture from the ground up, generate additional revenues, and encourage farmers to shift to organic farming. 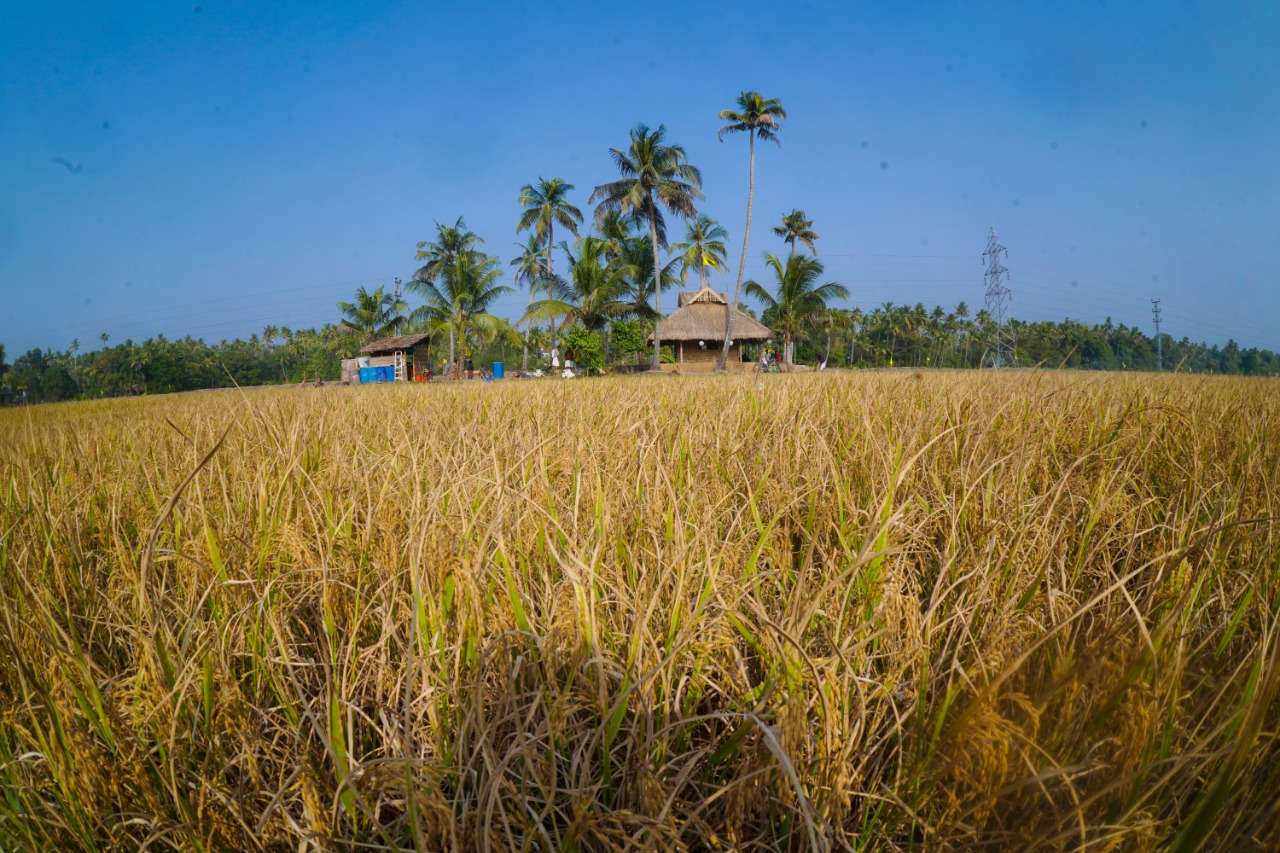 In June 2020, farmers planted nearly 70 kg/ha of Jyothi Kerala Red Rice seeds on their land. The farmers procured the seed through the panchayath scheme supported by the government of Kerala. (Photo courtesy of K.R. Sreeni)

.
Thanniyam Gram Panchayat in Anthikad Block Panchayat is located 20 kilometers from Thrissur in Kerala, India. For generations, the men and women of the panchayath (the basic village governing institute in Indian villages) have subsisted on agriculture.

Although the village has good rainfall, the inadequate supply of fresh water through the irrigation canals left their fields dry. The improper barrage management at the estuarine mouths caused saltwater to flow inwards into their fields.

The farmers have been using fertilizers and pesticides for a long time which that resulted in the high cost of crop production. Most of the farmers abandoned farming 17 years ago leaving hundreds of hectares of “cultivable wasteland” behind.

Rishaba Yagam, a flagship program, was launched in January 2020 at the Krishi Unnati Mela, an agricultural fair held to create awareness about the latest agriculture-related technological developments among farmers.

The aim of Rishaba Yagam is to promote organic farming, convert fallow lands to make them more productive, increase facilities for agro-based entrepreneurship, mitigate the effects of climate change on agriculture, and maximize the use of technologies that depend on ecologically sound principles.

It was marked with the harvesting of different vegetables produced in the panchayath and a planning session to begin organic farming for the upcoming kharif (July -October). The farmers’ produce were very valuable as it came during the COVID-19 pandemic. 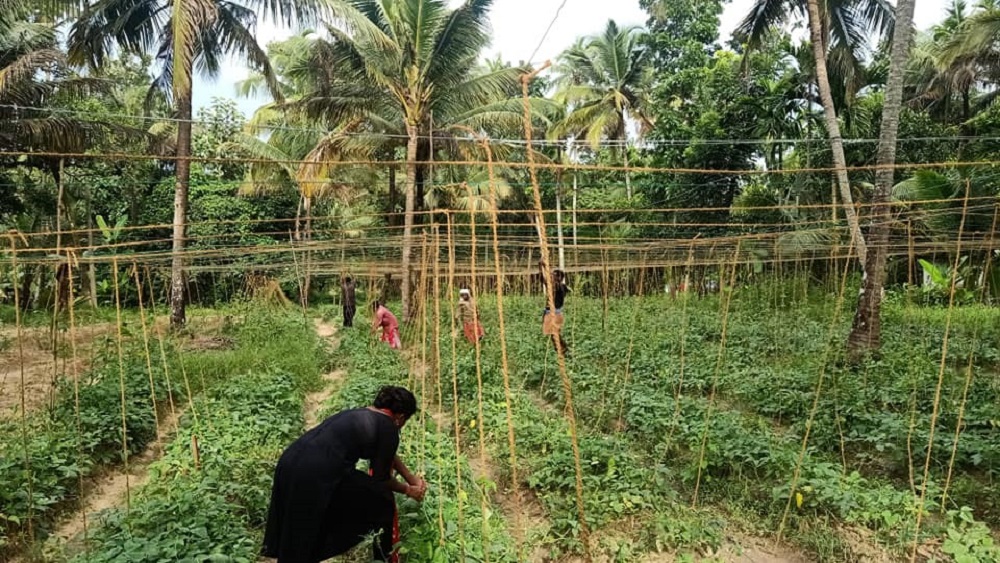 A key intervention made by the program was to distribute seeds through SHGs to start kitchen gardens to help increase food diversity in the diets of the participating families and reduce reliance on the market for fruits and vegetables. (Photo courtesy of K.R. Sreeni)

.
Rebuilding from the ground up
After understanding the dismal situation of the paddy farmers, a plan was drawn to revive the community’s agriculture from the ground up, generate additional revenues, and encourage farmers to shift to organic farming.

In meetings conducted with Thanniyam Agriculture officers, the farmers discussed problems, possible solutions, and decided to form a farmers’ group to ensure food and nutritional security in Anthikad Block Panchayat.

The first Sarvathobhadram-Organic was formed in May 2020 with 50 farmer members mostly having land in the Peringottukara wetland area.

A key intervention made by the program was to distribute seeds through self-help groups (SHGs) to start kitchen gardens to help increase food diversity in the diets of the participating families and reduce reliance on the market for fruits and vegetables. So, although the delivery of perishables from different states went down by more than half during the COVID-19 lockdown, the community-led initiatives help to meet the entire requirement of vegetables and fruits in Anthikad Block Panchayat.

The successful model was replicated in different wards of the block by distributing 50,000 saplings, seeds, and organic fertilizers to SHG groups to start their kitchen gardens. The project benefited 6,500 families by ensuring food supplies and nutrition through kitchen gardening in the block. The scaling up of the initiative converted 13 hectares of fallow land with organic vegetables and paddy in 25 hectares of wetlands. 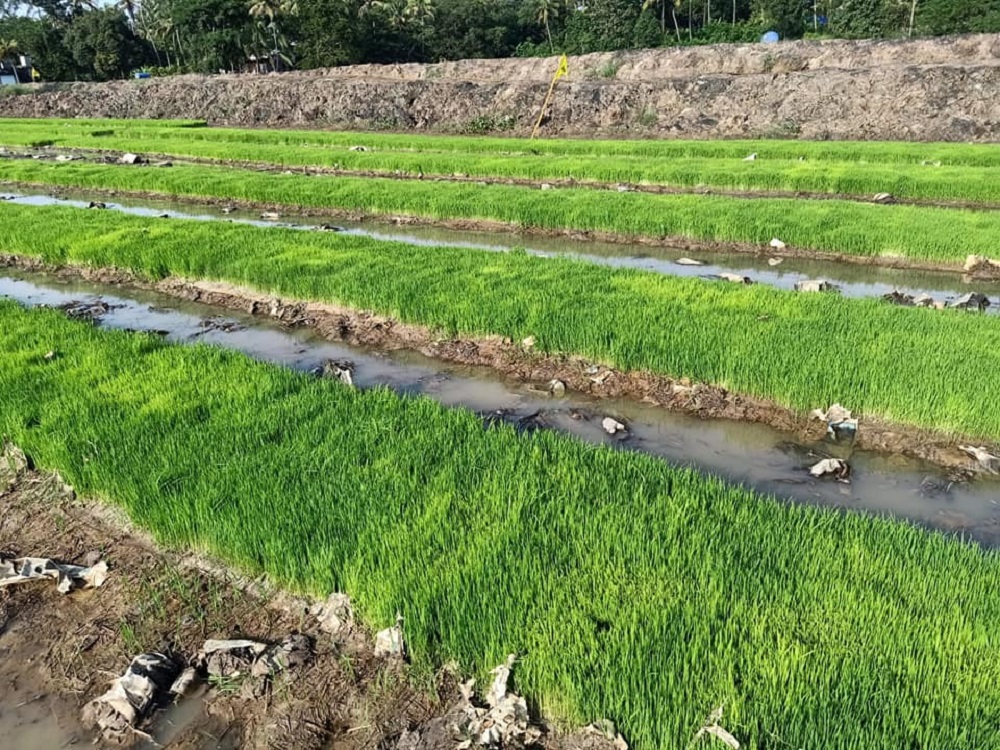 The decision to experiment with organic farming after 17 years on cultivable wasteland was challenging with uncertain outcomes. However, the farmers in Anthikad Block Panchayat are now committed to taking it further. (Photo courtesy of K.R. Sreeni)

.
Farmers working together
Group farming initiatives are a big step forward for impoverished farmers to bring themselves out of debt. Now the farmers’ club consists of six groups (Dhanu, Makaram, Kumbam, Meenam, Medam, and Edavam) managing different stages of agriculture. Much to their surprise and satisfaction, they experienced a profitable crop of organic vegetables.

The decision to experiment with organic farming after 17 years on cultivable wasteland was challenging with uncertain outcomes. However, the farmers in Anthikad Block Panchayat are now committed to taking it further.

Wetland cultivation is different from other cultivation in many ways. The wetlands are low-lying tracts 0.5 to 1m below mean sea level and remain submerged for about six months a year. Rice cultivation in the wetland starts with dewatering low-lying fields. It is part of the natural drainage system and connected by canals and ponds that are linked to the sea.

Collectively, the group owns about 25 ha of fertile land with good rainfall and access to irrigation facilities. The members defined their responsibilities and formulated guidelines for internal management.

With guidance from Sarvathobhadram-Organic and support from Krishi bhavan (agriculture office), they started with activities like selecting crop varieties, soil testing, seed testing, crop planning, and water budgeting and conservation measures. Every step was discussed by the group to find solutions. 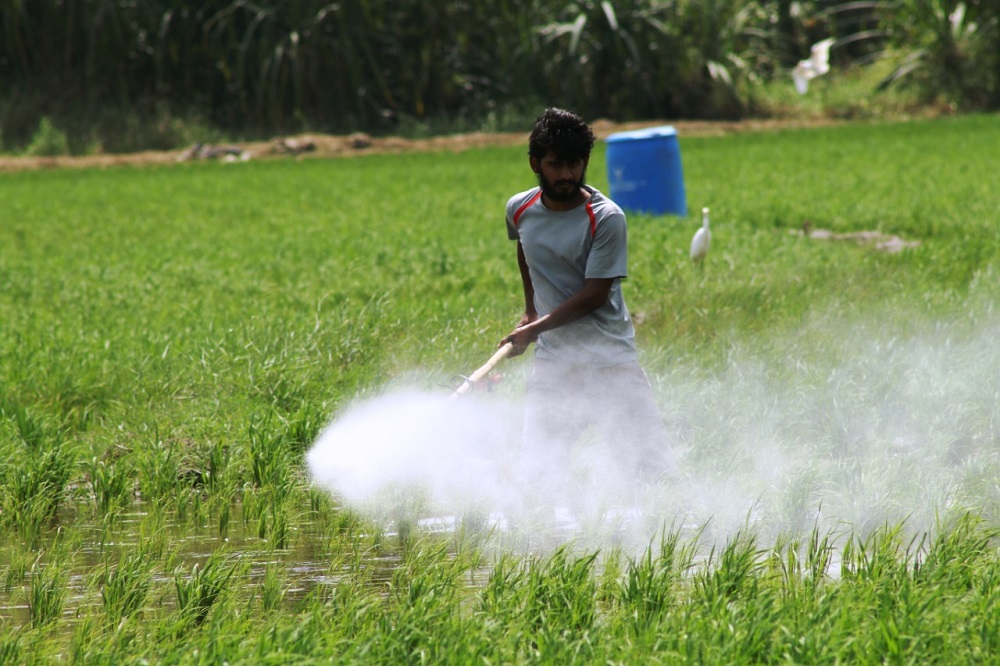 Sarvathobhadram-Organic provided the farmers with training in preparing natural pesticides and fertilizers such as jeevamirtham (a mixture of cow dung and urine, legume powder, and jaggery).

The farmers, in turn, responded with maximum participation and trust that, through this new venture, the livelihood of their entire village could be restored and that a brighter future would await them.

“We took the risk and tried something different,” said Mrs. Linda Vinod, a founding member of Sarvathobhadram-Organic “The result was selling a new crop for USD 0.96/kg against the government minimum support price of USD 0.40/kg.

Seed selection and health benefits
In June 2020, farmers planted nearly 70 kg/ha (1,750 kg for 25 ha) of Jyothi Kerala Red Rice seeds on their land. The farmers procured the seed through the panchayath scheme supported by the government of Kerala.

Jyothi Kerala Red Rice is largely cultivated in the Palakkad Region of Kerala where it is called Palakkadan matta rice. Since the grains are partially boiled in the husk, the rice is called Red Parboiled rice. This rice can be eaten plain or used for making flakes, broken rice, appams, idlis, and various snacks like kondattam and murukku.

It is rich in magnesium and calcium. With its higher minerals, vitamins, fiber, and others, it contributes to a healthier diet. The high fiber content also enhances its anti-diabetic properties, by slowing down the absorption of carbohydrates and helps control blood sugar.

Reaping the bounty
After the first harvest in January 2021, it became clear that all their hard efforts had come to fruition. The farmers’ initial costs had been dramatically reduced by shifting to organic practices and availing of government schemes for seeds. Workers also benefited from the Mahatma Gandhi National Rural Employment Guarantee Act. The law aims to enhance the livelihood security of people in rural areas by guaranteeing wages for cleaning canals and securing irrigation with a new pump set for one hundred days.

Thanks to this convergence approach, the Sarvathobhadram-Organic farmers harvested their first profitable crop after seventeen years. Using natural farming methods, they saw a phenomenal increase in net income–from a loss of more than USD 1,200/ha to a profit of USD 2,880/ha.

Another contributing factor to profitability was the adoption of postharvest techniques such as cutting, cleaning, sorting, and branding using a harvesting machine provided by the government. This not only increased the market value of their rice. It also allowed them to sell their organic rice paddy that is always in high demand.

Farm-to-direct market approach
The key to selling their products is good marketing. But the isolated villagers usually struggled with agriculture marketing and access to the market. Sarvathobhadram-Organic helped by identifying direct bulk buyers at the big markets thus eliminating the need for middlemen.

The farmers, with the help of panchayath, started a rural market where they not only sell rice but also by-products like broken rice, rice with 30% bran, and rice flakes. As a result, the farmers were able to repay all the loans taken from cooperative and nationalized banks with the earnings from just one successful season.

A model for progress
Now the village has become a role model in the region. The farmers are in a position to train farmers in nearby districts who are interested in learning the natural methods of agriculture. The great success attracted the attention of several government officials who visited the fields of Sarvathobhadram-Organic and promised to support similar initiatives with more subsidies.

In the next five years, Sarvathobhadram-Organic plans to convert the entire Thanniyam Gram Panchayat into an organic crop production area.

“At first when we took those first 25 hectares to transition to organic our farmers are unaware of the organic method,” said Sanjay Raj T a member of the farmers’ group. “But once we started to see the first rice sprouts from the field after 17 years, we knew the importance of agroecological footprints.” 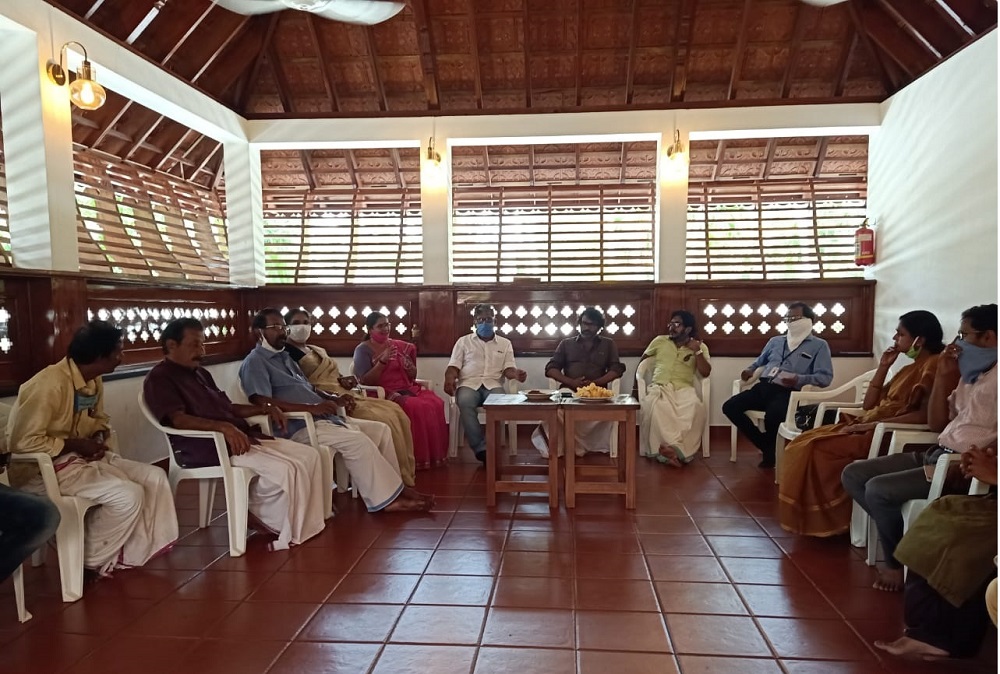 The farmers of Sarvathobhadram-Organic have turned their fate around. With other projects underway, the air is energized with hope, resilience, and inspiration in a time of COVID-19. (Photo courtesy of K.R. Sreeni)

.
Turning a pandemic into a boon rather than a bane
Over the course of the last fruitful year, life in Thaniyam Panchayath has changed dramatically–this time for good. Along with their improved relationship with the local agriculture department, most farmers get the benefits of government schemes.

More importantly, farmers recovered their confidence and gained self-respect as they created hundreds of direct and indirect jobs during the pandemic.

The farmers of Sarvathobhadram-Organic have turned their fate around thanks to the inspiration, organization, and perseverance of Adv. Raghu Raman Panicker. With other projects underway, including a storeroom as well as securing an organic certification, the air is energized with the hope of rebuilding a self-sufficient village that ensures healthy food for all. It is hope, resilience, and inspiration in a time of COVID-19.