“As a technical leader, IRRI needs to promote the contribution of social sciences to ensure farmer perceptions are contributing to prioritizing R&D efforts . India and the rest of Asia need to focus on working better with farmers to promote land aggregation and encourage the adoption of technological advances and mechanization.” 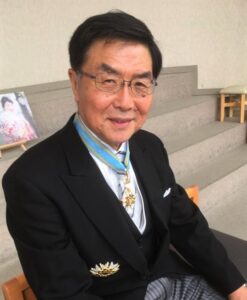 On 14 November 2021 in Tokyo, Keijiro Otsuka, former economist (1986-91) and board member (2002-07) at the International Rice Research Institute (IRRI), was awarded the Japanese Order of the Rising Sun, Gold and Silver Star during the 2021 Autumn Conferment of Decorations.

The honor, among Japan’s highest and most prestigious, is awarded by the Emperor to individuals, both Japanese and foreign nationals, in recognition of their meritorious service and distinguished achievements. It particularly recognizes Professor Otsuka’s outstanding performance in university education and research.

Prof. Otsuka served as the Chair of IRRI’s Board of Trustees in 2004-07 and is currently a specially appointed professor of the Graduate School of Economics at Kobe University. He has had a long career in energetically conducting research activities in the field of development economics and conducted field research focused on agricultural and industrial development strategies by verifying the heterogeneity and similarities between Asia and Africa.

In 2018, he discussed the role of social science research in agricultural R&D systems.

“As a technical leader, IRRI needs to promote the contribution of social sciences to ensure farmer perceptions are contributing to prioritizing R&D efforts,”Prof. Otsuka said, “India and the rest of Asia need to focus on working better with farmers to promote land aggregation and encourage the adoption of technological advances and mechanization.”

He emphasized the catalyzing role of agricultural research systems in bringing about economies of scale through land reconsolidation and eventual mechanization such as the “small farmers, large field” scheme piloted by IRRI in Odisha, India.

In a 2014 article in Rice Today, in which Prof. Otsuka reassessed Japan’s development assistance, he pointed out that farming technologies depend on climate and local conditions, so they cannot simply be imported from other countries. Applied research is usually needed to adjust advanced technologies from elsewhere to work under local conditions.

“But surprisingly,” he said, “in rice growing, Asian technologies can be used in Africa without much modification. So, a Green Revolution for rice in Africa is possible even without extensive applied research.” 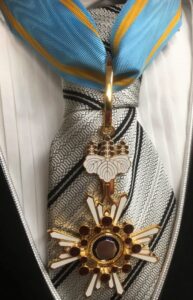 In 2010, he posited (with Jonna P. Estudillo) that an important lesson for Africa is to minimize excessive government intervention in the land market in order to avoid getting into the inverse correlation trap that was experienced in India and the Philippines. Government efforts should focus on establishing well-defined property rights, which is a crucial element in the efficient working of the rural land market.

Prof. Otsuka has been a professor at the National Graduate Institute for Policy Studies in Tokyo and was chair of the Oversight Committee of the Global Rice Science Partnership (now the CGIAR Research Program on rice agri-food systems) earned degrees at Hokkaido University (BA in agricultural sciences) in 1971, Tokyo Metropolitan University (MA in economics) in 1974, and the University of Chicago (PhD in economics) in 1979.

Prof. Otsuka has received numerous other honors and awards including the Quality of Research Discovery Award from the American Agricultural Economics Association (1992), the Nikkei Outstanding Book Publication Award (1995), and the Japanese Medal of Honor with Purple Ribbon, awarded for his achievements in science (2010). He has authored or edited 26 books.