IRRI’s growing germplasm bank now contains more than 30,000 of the world’s estimated 100,000 varieties. Many of these varieties yield poorly but have inherent genetic characteristics, evolved or selected over centuries, that adapt them to specific environmental conditions. Many of these rices face the threat of extinction. Farmers often abandon their traditional rices as they adopt high-yielding varieties. When such rice strains disappear, the invaluable genes which carry the desirable characters from one generation to the next, also vanish.IRRI cooperates with rice specialists throughout the world to locate, collect, and preserve as many rice strains as possible, including those of unknown potential, before these strains disappear. During 1973, IRRI scientists helped in germplasm collection efforts in Bangladesh, Burma, East Malaysia, Indonesia, the Khmer Republic, the Philippines, and South Vietnam. We collected many special types reported to be resistant to salinity, tolerant to acid-sulfate soils, or resistant to drought. 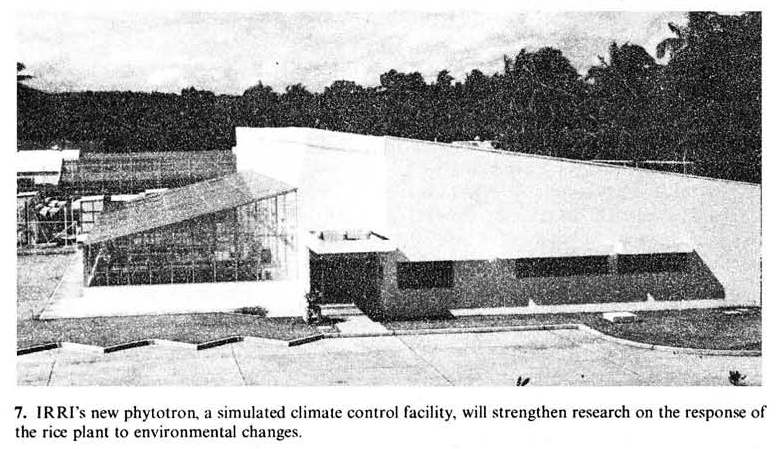 Great strides were made during 1973 in IRRI’s genetic improvement program. A new variety, IR26, was released. It has good grain quality and yielding ability. But more important, it has moderate to high levels of resistance to seven major insect pests and diseases, including the brown planthopper which has become a major threat in the Philippines, South Vietnam, Sri Lanka, and parts of India. This variety is expected to spread rapidly into these hopper-infested areas as well as into regions where tungro virus, green leafhoppers, and blast have been problems in the past.

Remarkable progress is being made in introducing resistance to insects and diseases. In 1973, 70 percent of the 185 entries in the annual replicated yield trials at IRRI had multiple resistance to at least five important diseases and insect pests. The comparable figure in 1972 was only 5 percent. IRRI’s scientists are making headway in blending insect and disease resistance into lines already known to have good grain quality and yielding ability.

Another measure of the progress at IRRI in the genetic improvement of the rice plant is the number of crosses being made. More than 2,000 such crosses were made in 1973, double that accomplished in 1972, and five times the number crossed in 1971. We consider such high-volume crossing essential because desirable genetic characters are often associated with bad ones. We must make a large number of crosses to incorporate combinations of favorable plant characters into high-yielding lines.

We expedited our hybridization (crossing) effort by constructing a simple “vacuum emasculator” to speed up the removal of unwanted anthers from the florets. This replaces the time-consuming conventional method of using forceps to manually remove the anthers. By the new suction technique, an operator can emasculate 425 florets per hour, compared with 250 using the conventional method. We are releasing the design of this inexpensive machine on request to other plant breeding teams.

Adaptation of varieties. Modern varieties developed by IRRI scientists and their cooperators are being widely grown by farmers in rainfed areas as well as those in irrigated regions. The characteristics of the new stiff-strawed semidwarfs appear to make them as adaptable to rainfed as to irrigated conditions. This illustrates the wide adaptability of our breeding materials.

Cooperation with national programs. We continued our efforts to help cooperating country programs develop and improve rice varieties suitable for their local conditions. In 1973, we sent 7,618 seed packages of breeding lines to research workers in 45 countries. Some of these lines are being used as parents in the national breeding programs. Others are being tested directly for their adaptability to local conditions. A total of 25 IRRI breeding lines so tested have been released as commercial varieties by other countries, six of them this year.

Examples of the adaptability of these lines are: “Parwanipur 1” (IR400-29-9)—an early maturing line adapted to the foothills of the Terai region in Nepal; varieties “R” (IR1052) and “S” (IR1055)-two long-grained selections, named in Guyana, with quality characteristics especially suited to that area of the world; “Thon Nong 73-1” (IR1529-680-3)-a high-yielding selection named in Vietnam with sturdy stems and excellent grain quality, and resistant to blast, bacterial blight, and green leafhoppers. 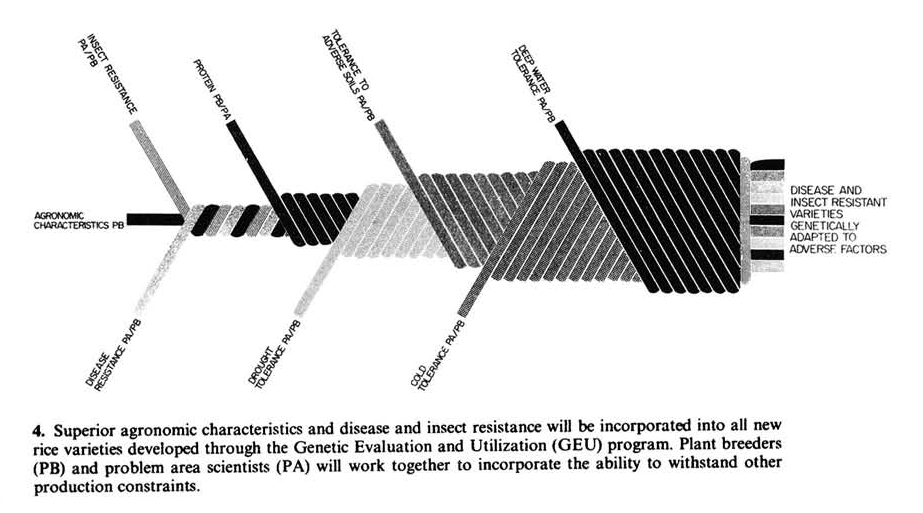 Genetic Evaluation and Utilization (GEU) program. Interdisciplinary and problem-oriented rice breeding is the backbone of GEU. Plant breeders are teamed up with “problem area” scientists, such as plant pathologists, entomologists, and cereal chemists. Each team member contributes his specialized (GEU) knowledge to the joint effort to identify, screen, and cross diverse rices. By so doing, the best characteristics can be incorporated into nutritious rice varieties which resist or tolerate the environmental and pest enemies of the rice plant (fig. 4).

The 30,000-sample germplasm bank is the primary source of genetic materials. From this bank, promising varieties from all over the world are screened to determine which have desired characteristics to use in crossing, or hybridization programs.

Hybridization and screening of the progeny provide lines which can be tested at IRRI and shared with cooperating country programs throughout the world. The ultimate objective of GEU is to help these country programs develop and place in the hands of farmers new varieties with characteristics suited to local conditions.

The nature of the GEU screening and field evaluation demands close interdisciplinary cooperation, which has always been a strong feature of IRRI’s rice improvement program. Such cooperation is responsible for the results described in the following sections.

Germplasm conservation. The hub of the GEU program is IRRI’s growing germplasm bank, which now contains more than 30,000 of the world’s estimated 100,000 varieties. Many of these varieties yield poorly but have inherent genetic characteristics, evolved or selected over centuries, that adapt them to specific environmental conditions (such as rices that grow on toxic soils or rices that are tolerant to drought).

Many of these rices face the threat of extinction. Farmers often abandon their traditional rices as they adopt high-yielding varieties. Encroaching urbanization and resource exploitation wipe out wild and primitive species. When such rice strains disappear, the invaluable genes which carry the desirable characters from one generation to the next, also vanish.

IRRI cooperates with rice specialists throughout the world to locate, collect, and preserve as many rice strains as possible, including those of unknown potential, before these strains disappear. During 1973, IRRI scientists helped in germplasm collection efforts in Bangladesh, Burma, East Malaysia, Indonesia, the Khmer Republic, the Philippines, and South Vietnam. We collected many special types reported to be resistant to salinity, tolerant to acid-sulfate soils, or resistant to drought.

Almost 4,000 new accessions were saved and added to the germplasm bank during 1973. Scientists in 38 countries draw nearly 10,000 seed samples from the bank to use in national breeding programs.

Agronomic characteristics. In some countries, varieties with intermediate plant type, represented by IR5 (120 cm high), are more popular for lowland rice production than the shorter statured varieties, such as IRS (100 cm high). Strains with intermediate heights are also favored for upland conditions. Consequently, we are introducing genes for intermediate stature into lines known to be resistant to the major insects and diseases and to have high tillering capability, erect leaves, and sturdy stems.

In response to the growing demand for short-seasoned varieties, we have developed lines which mature in about 105 days. For comparison, IR8 matures in 130 days. The short-seasoned IR2061 selections are the most promising of these new lines. Their grain qualities are good; their insect and disease resistance remarkable; and their yields are among the highest of the early maturing selections.

We continued to improve grain quality to satisfy the tastes of rice consumers in different parts of the world. We are blending the qualities of desired amylose content, aroma, and stickiness into lines with high resistance to insects and diseases.

Disease resistance. Rice is often cultivated year-round in the hot, humid tropics. These conditions encourage rapid buildups of pathogenic organisms. The breeding of resistant varieties is the most practical way to control diseases. Continuing efforts are being made to screen varieties and hybrid progenies for resistance to major diseases and to study the behaviors of the different pathogens.

We have found that races of the variable blast fungus disease (Pyricularia oryzae) constantly change in the field. For example, in an epidemic in the 1973 upland variety trial, we found 11 races out of 46 isolates tested from the same field. Ten of the 11 races are new to the Philippines. The 10 new races attacked CO2 s, which was resistant to most races in previous tests, but they did not infect Khao-teh-haeng 17, which was susceptible to most of the previously identified races.

Blast resistance is generally “vertical”-a variety may be highly resistant to one race of blast, but susceptible to others. We are incorporating broad spectrum resistance into new lines so they will remain resistant in different regions and seasons. The line IR 1514A-E666, for example, was resistant to most races of blast during the 1973 epidemic of upland rice. Ten new races of blast were identified at IRRI during 1973, bringing to 229 the total number of races identified.

We continued to coordinate the International Blast Nursery for the 11th year. We distributed the seed of test materials to 26 countries. Local scientists are evaluating them under their specific environmental and cultural conditions and using the best materials in their national breeding programs.

Searching for ways to cut time and land requirements for sheath blight resistance screening, we tested three new methods: the seedling test, the detached flag leaf test, and sheath inoculation. Varieties react distinctly to all methods, but results of the three tests do not always agree. Unlike blast disease, no distinct physiological races of sheath blight pathogens have been found. This may indicate that incorporation of stable resistance to sheath blight will not be too complicated.