The challenges to rice researchers and farmers in 1979 have many elements in common with those faced by scientists and rice producers in 1960. Even though worldwide production levels are markedly higher than had been predicted by the pessimists of the 1960s and early 1970s, they barely keep pace with population increases. It is obvious that continued success in rice research and production will be needed. For both research planning and program implementation, IRRI continued to rely heavily on networks of cooperating scientists in rice-growing countries, especially in Asia. 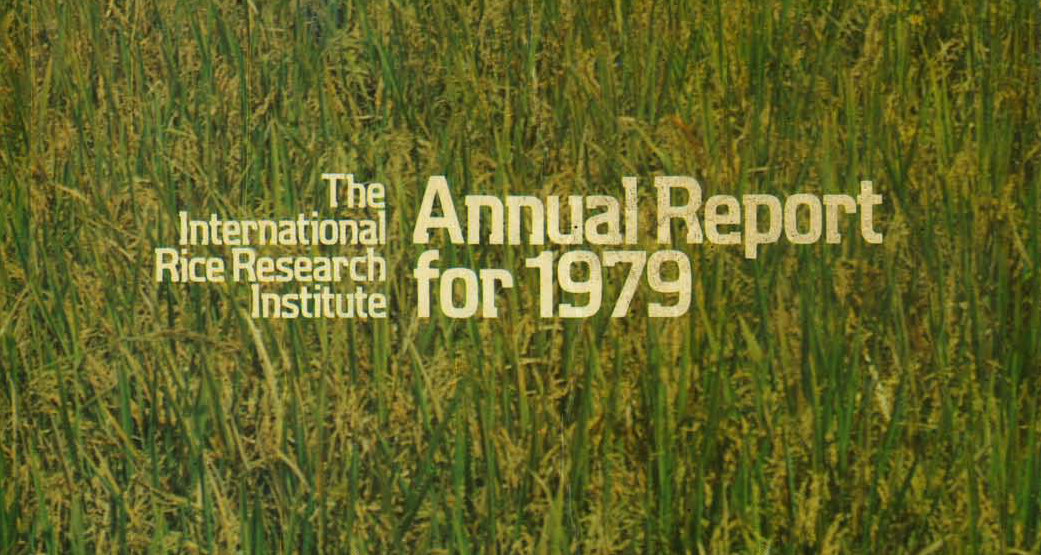 On 14 April 1979, IRRI entered its 20th year. The Institute was formally established on that date in 1960 by a group of farsighted, innovative men who recognized the need to match food production with massive increases in the population taking place in the tropics. Without the genius and the remarkable successes of those who organized and led IRRI during its formative years, today’s rice researchers would be greatly handicapped. The organizers’ high standards have left a challenge, not only to their successors at IRRI but to cooperators in national programs as well.

The challenges to rice researchers and farmers in 1979 have many elements in common with those faced by scientists and rice producers in 1960. Even though worldwide production levels are markedly higher than had been predicted by the pessimists of the 1960s and early 1970s, they barely keep pace with population increases. Worldwide production of rice in 1979 was estimated at only 375 million tons—about 3% less than in 1978, a record year. The sizable production decreases were due to dry weather in India and Bangladesh and were not fully compensated for by production increases in China, the Philippines, and Korea, and in countries outside Asia. As a consequence, world trade in rice increased in 1979 as did its international price.

Two newspaper reports early in 1980 illustrate the long-term problem we face. On 20 February, the World Food Council reported that world food output declined by 2% in 1979. This gloomy report was followed by an announcement from the Environmental Fund that on 14 March the world population had reached the 4.5 billion mark. Most of the 90 million people added in 1979 live in Asia where 90% of the world’s rice is produced and consumed. It is obvious that continued success in rice research and production will be needed.

The five primary activities that have characterized IRRI’s programs continued in 1979. Research at IRRI headquarters covered problems that cannot be conveniently handled by counterpart scientists in national research organizations.

Each of these activities required effective cooperation with colleagues in national programs in both the developing and the more developed countries.

For both research planning and program implementation, we continued to rely heavily on networks of cooperating scientists in rice-growing countries, especially in Asia. The major networks through which much of our research is accomplished include:

The International Rice Testing Program provides an effective research linkage for the world’s rice improvement programs including our Genetic Evaluation and Utilization (GEU) program. In 1978, seventeen types of field nurseries were composed, and one or more types went to scientists in 52 countries.

We received data from 431 individual trials of 17 types of 1,978 International Rice Testing Program nurseries. These data were compiled, analyzed, and published in 1979. The performance of early-maturing rices in yield nurseries was most encouraging. These rices performed almost as well on a per-crop basis as their medium- and late-maturing counterparts.

On the basis of yield per day, however, they produced about 20% more rice than the medium- and later-maturing rices. TheInternational Cropping Systems Network has research at 22 sites in 8 countries. Fifteen of the sites have rainfed wetland conditions. In addition to these network sites, national researchers in the 8 countries have cropping systems work underway at an additional 27 sites.

We expedited communication among these scientists by holding a workshop in Nepal in May, a special workshop for economists, and a cropping systems study tour in October and November.

The International Network on Soil Fertility and Fertilizer Evaluation for Rice, which had been set up initially to determine means of increasing fertilizer efficiency, was broadened to include other aspects of soil fertility and rice production. Experiments on azolla were included and special tests were planned for fertilizing rice in deepwater areas.

The results of the work on constraints, implemented through the International Rice Agroeconomic Network, were summarized and published. The farm machinery network gave priority to helping manufacturers in developing countries to test, fabricate, and produce appropriate machines for the small farmer and to the training of young engineers at IRRI headquarters.