The Conference on Women in Rice Farming Systems was one of the several seminars, workshops, and conferences IRRI sponsored during 1983. The conference examined the impact of new technologies on women-specific operations and sought to identify where and how women can play a greater role in technology development and transfer. 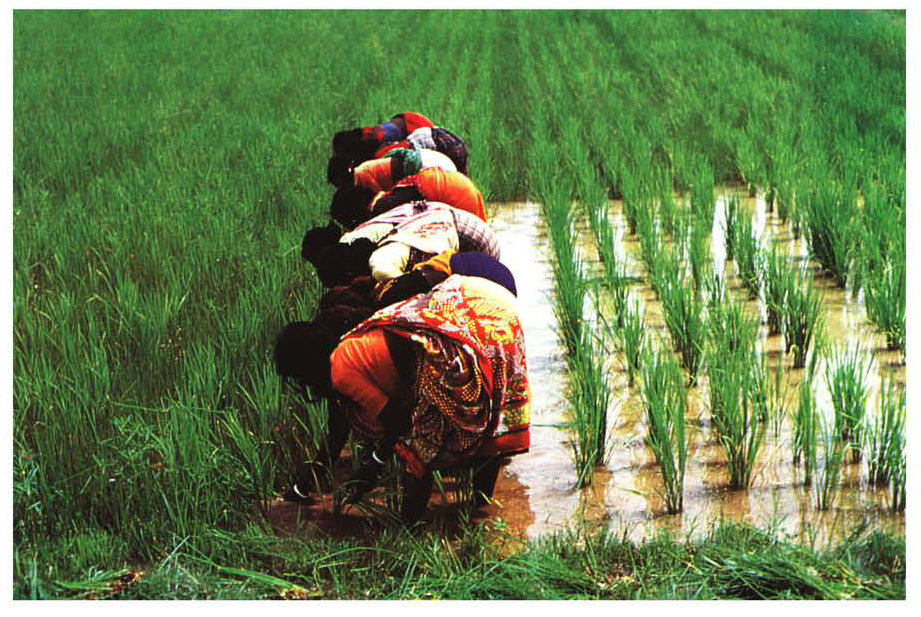 The Conference on Women in Rice Farming systems examined the role of women in rice farming and stressed their importance in the technology development and transfer process.

.
World rice production in 1983 was about 435 million tons, 3% more than in 1982, and more than the FAO long-run trend. Production increased in most of Asia, especially in Bangladesh, Burma, China, India, Indonesia, Pakistan, Sri Lanka, and Thailand. Such increases continue the long-term trend of growth in rice production ahead of the population.

Yields have become the major source of growth, as the 1970s saw further improvements in the MVs first introduced in the mid-1960s. Many Philippines traditional rice importing countries have become self-sufficient in rice, and the real price of rice in those countries and the world market has declined. In Latin America production increased slightly, but it declined in Africa.

When Premier Zhao Ziyang of China presented the 1982 Third World Prize to IRRI in April 1983, he described IRRI’s role in increasing rice production:

IRRI has developed many good strains to help developing countries increase rice yield and improve quality. Those strains not only can increase the yield markedly, but also can resist plant diseases and insect Index pests, shorten the maturing period and save water.physiology, and soil science. Its achievements have spread far and wide in the Third World.

In 1983 IRRI worked to strengthen collaborative research with 90 national research systems and other international agricultural research centers, and to magnify the impact of the International Rice Testing Program, the International Network on Soil Fertility and Fertilizer Evaluation for Rice, and the Asian Rice Farming Systems Network.

Collaborative research with national scientists is the foundation for many major research projects. IRRI staff work with national scientists at selected agroclimatic sites where they conduct in-depth research using similar methodology, and frequently exchange research results and materials. For example, by comparing the interactions of local BPH populations on 10 selected rice varieties, entomologists in China, India, Indonesia, Sri Lanka, Thailand, and IRRI established that there are at least 4 distinct BPH biotypes. Cultivation of BPH resistant varieties has become the principal method of controlling that insect.

In 1983, in addition to Los Baños staff, IRRI supported 22 scientists in 8 countries. We laid the foundations for a new cooperative program with the Malagasy Republic, brought our team in Egypt up to full strength, and developed closer ties with CIAT, IITA, and WARDA for rice research in Africa and Latin America. In October 1983 the IRRI Board of Trustees visited Malagasy and Tanzania and met in Egypt, where they visited the Rice Research and Training Project, which is a cooperative venture with the Universities of California and Arkansas.

A memorandum of agreement was signed by CIAT, IITA, IRAT, IRRI, and WARDA that established an intercenter coordinating committee for upland rice research. The committee, to be chaired by each center in turn, will promote communication among cooperators by publishing an upland rice newsletter in English with French and Spanish translations. EMBRAPA, a national agricultural research center in Brazil, is also participating.

At the 1983 International Rice Research Conference, we agreed to use an operational classification of rice-growing environments that lists major environments as irrigated, rainfed lowland, deepwater, upland, and tidal wetland. Within those five categories are 20 subcategories. Our goal is to sharpen the precision of that system through continued environmental research and cooperation with rice scientists around the world.

In 1983 we signed a memorandum of agreement with Bhutan for the training of Bhutanese scientists at IRRI, exchange of genetic materials and research information, collaboration on research projects, and exchange of visits of Bhutanese and IRRI scientists.

As we develop collaborative relationships in more rice-growing countries, we continually collaborate in the collection of rice varieties for conservation in the IRRI germplasm bank (renamed in 1983 as the International Rice Germplasm Center). In cooperation with the International Board for Plant Genetic Resources and major national research systems, we developed and immediately implemented a second 5-year plan for germplasm collection, conservation, and utilization (1983-87).

We also strengthened collaborative work with research organizations in developed countries. Joint research, particularly in biotechnology, was initiated with universities and institutions in the Federal Republic of Germany, France, the United Kingdom, and the United States. Social science research was intensified in association with the Agricultural University of Wageningen, Netherlands.

Among several seminars, workshops, and conferences sponsored during 1983, two deserve special attention. The Conference on Women in Rice Farming Systems examined the impact of new technologies on women-specific operations and sought to identify where and how women can play a greater role in technology development and transfer.

The Workshop on Copublication: Strategies for Multilanguage Publication in Agriculture brought together communication specialists from international, national, and commercial organizations to discuss publication and dissemination of agricultural information in the many languages of the developing world.

In addition to graduate training, we conduct several annual short courses. In 1983 we added an Upland Rice Training Course. There are special courses in multilocation testing and varietal screening for upland crops. To maintain high standards of relevance and excellence in our educational programs, we formed in 1983, an IRRI Academic Council composed of IRRI staff and outside experts.

Rice scientists and scholars around the world depend on the IRRI communications program and library for current information on rice science. In 1983 the Information Services Department was redesignated the Communication and Publications Department. This change reflects an increasing mandate not only in publishing and providing information support for IRRI scientists but also in institution-building and development of agricultural communication capabilities in national programs.

IRRI released 15 new books in 1983 and distributed about 70,000 copies of major books. Book publishing is self-sustaining; new titles are funded by sales.

IRRI and the German Agency for Technical Cooperation organized the first book exhibit of the international agricultural research centers at the 1983 Frankfurt Book Fair. Seventeen centers displayed about 1,000 titles. The fair attracted more than 500,000 visitors, mostly librarians and book buyers.

The number of books and journals borrowed from the library increased markedly and, as in previous years, requests for copies of Japanese literature on genetics and breeding exceeded those for literature on all other topics.

We acquired 4,106 new volumes, bringing the collection to 66,528 monographs, 196 serial titles, maps, translations, and microfilm. The library continued to purchase and distribute books to IRRI research scholars and other trainees.