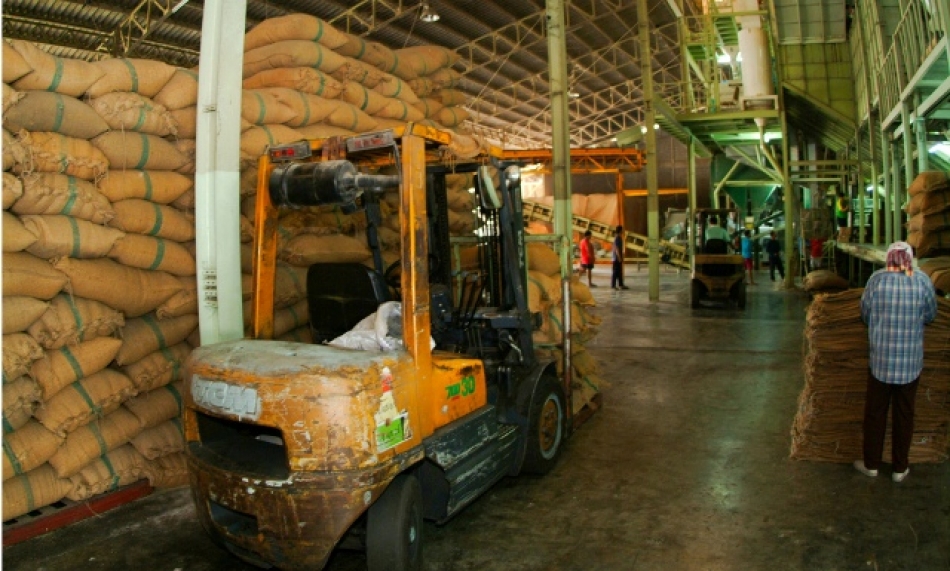 Piles of rice in jute sacks inside a rice mill in Thailand. (Photo: IRRI)

Thailand has been the largest rice exporter in the world for nearly five decades, when the volume of Thai rice exports steadily increased from 1 million tons in 1974-75 to Samarendu Mohanty more than 10 million tons in 2010-11 (Fig. 1). The country’s share in the global market peaked at 43% in 1988-89; since then, it has been fluctuating between 25% and 30%. During this period, however, global rice trade has tripled from 11 to 33 million tons in the wake of trade liberalization among many countries in the late 1980s and the 1994 General Agreement on Tariffs and Trade (GATT).

As part of their GATT market access commitments, countries partially opened up rice trade, which increased the volume more than 50% in the past decade. The expansion of trade came along with the emergence of Vietnam and India as growing exporters in the global rice market. In the last decade, Vietnam and India together have accounted for nearly a third of global rice trade. Despite losing market share, Thailand has been able to steadily increase its volume of exports and maintain its status as the largest exporter in the world.

Current status
As reported in our price and market blog in September 2011, the pledging program encouraged Thai farmers to expand their rice area in response to higher price support and to offset last year’s crop losses due to floods. The United States Department of Agriculture (USDA) now projects the 2011-12 Thai rice crop to be 20.3 million tons of milled rice, which is more or less the same as the previous year’s production.

In addition, rice has been diverted from the market to warehouses, and Thai exporters have been priced out of the export market. Unfortunately, India’s grand entry into the nonbasmati export market, after 4 years, has made matters worse for Thai exporters. The quoted prices for Thai white and parboiled rice were higher by nearly $200 per ton than their Indian counterparts during the initial months after India’s resumption of nonbasmati rice exports (Fig. 2). However, this price difference has narrowed with the steady decline in Thai price quotations in recent months, but then again the price difference still remains around $100 per ton.

India’s record production in 2011 and swelling procurement stocks continue to keep India in the export market. Supported by a weak rupee, India’s exports remain overly aggressive in racking up sales. In this price war, Vietnam also lost some market because of its high quotations, which closely followed Thai prices. USDA now projects Indian rice exports for 2011-12 to be 6.5 million tons, which is the same as the projected exports from both Thailand and Vietnam in the same marketing year. This is nearly 40% lower than what Thailand exported in 2010-11: 10.5 million tons.

Future prospects
An all-too-important question is thus raised: Is this the end of the dominance of Thailand in the global rice market? The answer to this question is not a categorical “yes” or “no.” It depends on developments on several fronts. If Thailand disbands its pledging program, it will keep its top post, at least in the immediate future. But, its stay on top may be short-lived if Myanmar and Cambodia get their act together and modernize their rice sector and reform their policies. Both these countries are endowed with fertile lands and a favorable natural environment that can expand their production and take away market share from Thailand.

In 2011, the Myanmar government took some steps to reform and open up its economy, and recent visits by several high-level government representatives from several countries such as the United States, Britain, and Japan indicate that sanctions on financial services, new investment, travel, and trade may be lifted, or at least relaxed, in the near future.

Moreover, several government initiatives, which aimed to improve the performance of its rice sector for the past years, raised hope for Myanmar’s return to the global rice market sooner. One of these initiatives is the establishment of the Myanmar Rice Industry Association (MRIA) in 2010 by merging producers, traders, and millers associations. It aims to speed up the development of the sector by attracting private investment and raising the sector’s concerns to the government.

The government has also empowered the MRIA with the right to export, which was previously controlled by the government. Also, several specialized rice companies (SRC) have been established in major rice-growing towns to provide farmers with low-rate farm loans and other services such as farm machinery rentals and paddy purchase. These companies are partly owned by local traders, millers, and farmers, with a majority of ownership held by private investors from urban areas.

These are a few of the baby steps taken by the Myanmar government in the right direction. The rice sector, which has been affected by decades of extensive government controls, needs more efforts to improve the availability of credit, inputs, and storage facilities. The port facility and financial system, which have been in complete disarray from years of international sanctions, need a major uplift if the country dreams of returning to its old glory of being a major player in the global rice market.

Just like Myanmar, Cambodia also needs to overcome many obstacles, including poor infrastructure (port facility, roads, irrigation, rural electricity, etc.); inadequate availability of credit, inputs, and quality seeds; and other supply chain constraints for its presence to be felt in the international rice market.

If Thailand persists with the pledging program, the emergence of new players in the export market will surely accelerate. The country may be displaced eventually as the largest exporter in the world. But, in the end, it all depends on how fast the global rice trade expands. If global rice trade volume follows the trend of the past two decades, it is possible to have enough maneuvering space for all exporters, including the new entrants. Hence, Thailand will continue to hold on to the top position.

Irrespective of what happens to Thailand’s status in the global rice market, it is exciting to see the prospect of new exporters in the rice market. This will definitely bring more stability to the market and improve global food security.

Economist Samarendu Mohanty shares his views on issues related to rice prices, the supply and demand of rice, and rice market and policy issues.