Peter Jennings, the International Rice Research Institute’s first rice breeder (1961-67), with a long career in Latin America after his work in Asia, kicks off this historic series with a singular wit. He played a major role in the development of IR8, the rice variety that would ultimately change the face of agriculture across Asia. He reminisced on a warm, muggy day (20 July 2007) at his home in Gainesville, Florida. Here are edited highlights of the interview.

A matter of 5 minutes
I started graduate school at Purdue University in 1953. I was there almost 3½ years for my master’s and doctorate. During my second year, a Mexican kid—Ignacio Narvaez—was in the office adjacent to mine. Ignacio was a wheat breeder for the Mexican Ministry of Agriculture associated with the [Nobel Laureate Norman Borlaug] group and he talked about Mexico and his work. I said to myself, “I want to work in international agriculture.” I was consumed by this. But everything I tried to become affiliated with the Rockefeller Foundation was useless. Nothing happened. Rockefeller didn’t need another plant pathologist.

So, I finished in 1957. Jobs were scarce. There was one job available in Madison, Wisconsin—a forage pathologist for the U.S. Department of Agriculture, which I was about to accept. At Purdue, I lacked one form for my doctoral thesis. I went to the dean’s office in the School of Agriculture to pick it up. While I was talking to the secretary, Dean Ernest C. Young—also a consultant to the Rockefeller Foundation who knew me because of my frustrated attempts to get into the Foundation—walked Peter Jennings, the International Rice Research Institute’s first rice breeder (1961-67), with a long career in Latin America after his work in Asia, kicks off this historic series with a singular wit. He played a major role in the development of IR8, the rice variety that would ultimately change the face of agriculture across Asia (see Breeding History). He reminisced on a warm, muggy day (20 July 2007) at his home in Gainesville, Florida.

He said, “Peter, what are you going to do?” I said, “Well, Dean, I’m going to go to Wisconsin.” He responded, “Didn’t you want to work with Rockefeller?” I said, “Yes.” He said, “Wait a minute.” The dean walked into his office, picked up the phone, and called George Harrar [then RF’s director for agriculture and later RF president, 1961-72]. He left the door open so I could hear. He said, “George, I’ve got a kid here. He set some sort of an academic record here at Purdue and he wants to work for you and what are you going to do about it?”

So, I had two phone conversations with George Harrar. During those conversations, he said something I never forgot, “Would you want to live in the Philippines?” I said, “Of course!” That night, I had to look in my atlas to see exactly where in the Pacific the Philippines were. He said, “Well, we’re going to do something there. It’s going to take 3 or 4 years to get organized. Meanwhile, we’ll have to find something for you to do [ultimately, brief stints in Mexico and Colombia].” I have a profound belief in predestination, fate, and luck. Had I been 5 minutes earlier or later that
morning at Purdue in the dean’s office, I would not have crossed paths with Dean Young, there would have been no phone conversations with Harrar, and I would have had a career as a forage pathologist in the U.S.

George Harrar—he was magnificent!
So, I got a job with the Rockefeller Foundation in 1957. Terrific! What’s the significance of this? Bob [IRRI’s first director general, Robert F.] Chandler’s book [An Adventure in Applied Science] cites the year 1958—about a year and a half after my telephone calls with Harrar—as the time when the Rockefeller and Ford Foundations first connected to thrash out the concept of IRRI. Harrar had “IRRI” on his mind when he talked to me much earlier on the phone about rice and the Philippines. You don’t see that in Chandler’s book. The driving force behind IRRI was George Harrar. He was magnificent, a giant!

Getting germplasm in the early days
When I finally got to IRRI in October 1961—as a breeder, not a pathologist— the first challenge was to assemble a comprehensive world collection of rice varieties. For germplasm, IRRI had only some 300 odd varieties. I spent a lot of time wandering back and forth in the mud trying to look at these plants. I wrote a letter, cosigned by T.T. Chang [IRRI geneticist, 1961-91], requesting any germplasm in small seed samples, and sent it to rice workers or experiment stations in some 60 countries. These were the days when it was pretty easy to move germplasm from one country to another. The response was wonderful. Within months, boxes and boxes of seed packages were coming in. I guess within 2 or 3 years we had several thousand accessions.

Increasing rice yields
Another challenge was more complicated. Chandler kept preaching: increase yield! Okay, that’s easy to say, but how do you do it? I spent a lot of time talking with Akira Tanaka, head of IRRI’s Plant Physiology Department [1962-66]. We tried to develop a mental image in our minds of what the leaves, stems, culms, and general architecture would look like on an ideal rice plant that would yield more. We determined that, if we were going to make any progress, we had to dramatically change the plant type. The first seminar I gave at IRRI was on what an ideal plant type had to look like if we were going to get higher yield. I wrote that up and sent it to Crop Science [Plant type as a rice breeding objective, 4:13-15, 1964]. There were no data, it was just philosophy. For some reason, Crop Science published it. Years later, I reread that paper, long after IR8 came out [in late 1966]. And it just seems to me that IR8 looks very much like what we were theorizing. 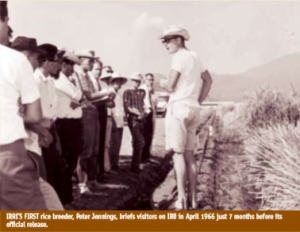 Well, the rest is history and just sheer luck. And it goes back to that first set of 38 crosses [that ultimately led to IR8] we made in late 1962. About half of them involved the three famous Taiwan short-statured varieties [Deegeo-woo-gen, Taichung Native 1, and I-geo-tze]. They looked terrible under Philippine conditions. They were riddled with bacterial leaf blight. They were shaded by tall things. They were sterile and miserable, but short! We grew out the F1s [first generation]—38 combinations, which is ridiculous by today’s standards. Thirty-eight crosses in a year—absurd! But that’s what we had. So, we grew out the F1s; they were terrible. They were worse than the parents themselves. They were gigantic—6–7 feet tall. We harvested the seed from each of the single crosses—38 populations. And for not having anything else, we had a large F2 [second generation] population—4,000–6,000 plants from each single cross.

Maybe a month after transplanting, one day we looked out there. The plants from the first cross were tall—terrible. It was a jungle. It was bad. Then, we came onto the plants from one of the crosses that involved one of the three Taiwan short-statured varieties. We looked down the rows. Something had happened! It was an epiphany! I never had an experience like that in my life—before or since. There were tall plants and there were short plants, but there were no intermediate plants! The short ones were erect, darker green, and had sturdy stems and a high number of tillers. We counted the tall plants and short plants. Essentially, the ratio of tall to short was 3 to 1—obviously a single gene recessive for shortness! It may sound something like arrogance, but I contend that I knew, at that moment, the significance of this.

Mixing good science with luck
When I was a little boy, I was a fan of an American baseball team, the Brooklyn Dodgers. Their famous general manager was Branch Rickey. This wizard said, “Luck is the residue of design.” I think he was right. Some people are lucky, some people are not lucky. Luck does appear on its own volition, I know, from time to time. But luck is a consequence of putting a lot of mental observational evidence all together and all of a sudden it happens, it works. There is always luck. But sometimes you earn your luck. You influence your luck for sure.