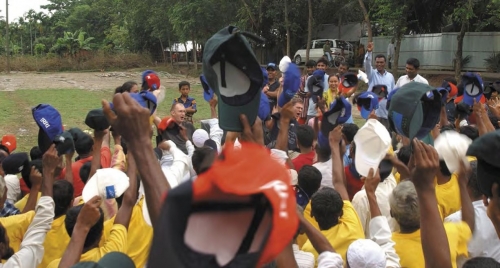 A GROUP OF RICE FARMERS, led by rural development expert Jan Orsini (hidden), raises an incongruous but rousing Thai victory chant in Comilla, Bangladesh. Orsini (inset) enthuses from the podium of the previous day’s workshop for 3,000 farmers about the success of the Livelihood Improvement Through Ecology (LITE) project. (Photo: Aileen del Rosario-Rondilla)

An American leads 3,000 Bangladeshi farmers in a rising Thai victory chant: “Chai yo! Chai YO! CHAI YO!” The scene is rousing, if odd, and the cheer is appropriate because these farmers in the district of Comilla, 80 km southeast of the capital, Dhaka, have won an extraordinary victory.

They are the vanguard of what could become one of the most beneficial rural movements in modern Bangladeshi history. If the Livelihood Improvement Through Ecology (LITE) project, led by the International Rice Research Institute (IRRI), continues as it has started, in less than a decade, most of Bangladesh’s 11.8 million rice farmers— almost a 12th of the country’s population of 141 million, according to the Bangladesh Rice Research Institute (BRRI) — will have stopped using insecticides and optimized their fertilizer use, thereby increasing their income by an average of US$17 per year. That may not sound like much to some, but where the average annual farm income after expenses is around $100, this money helps put children through school or buy grain to tide rice-deficit farm families over to the next harvest.

LITE — part of the IRRI-led project Poverty Elimination Through Rice Research Assistance, funded for Bangladesh by the United Kingdom’s Department for International Development —set out to discover the exact cause of an expected drop in rice yield when farmers stop spraying insecticide. The original aim, explains LITE principal investigator and IRRI senior entomologist Gary C. Jahn, was to identify safe alternatives to insecticides.

“To my surprise,” reports Dr. Jahn, “when people stopped spraying, yields didn’t drop — and this was across 600 fields in two different districts over four seasons. I’m convinced that the vast majority of insecticides that rice farmers use are a complete waste of time and money.

If they don’t spray they lose nothing, but they gain a lot — money, a safer environment and reduced risk to their health.”

LITE farmers also learn to reduce and optimize their application of nitrogen fertilizer (urea). They do this by comparing the four panels of the leaf color chart (LCC) to the leaves of their rice crop, and then fertilizing the crop just enough for the leaves to match the ideal color (see Specific benefits – Chart hit for N sync). The practice allows farmers to spend less on fertilizer and so improves their efficiency and profitability. What’s more, in the 2004 dry season, farmers following the LITE strategy increased their yields by an average of 400 kg per hectare — a significant boost for struggling farm families.

The method used to expand the scale of LITE from a few hundred farmers to several thousand — and potentially millions — is known as success case replication (SCR). Lead farmers, identified as being more successful than their neighbors, are trained to use the LCC and perform the experiments that prove they don’t need insecticides. They then train other farmers in their own village, as well as successful farmers from surrounding villages, who become the next lead farmers. The new lead farmers do the same, and the process repeats. The number of trained farmers grows exponentially each rice season — like recipients of a chain letter, but this time good things actually happen.

Mr. Barclay is an Australian Youth Ambassador for Development assigned to the International Rice Research Institute