Compared to the high cost of labor and inputs for the transplanted rice cropping system, the improved TAR VATTAR DSR technology saves farmers them about 40% in irrigation and costs of cultivation without any yield penalty. With less energy and fertilizer consumption in DSR, production costs were lower by USD 149/ha The incidence of pests and diseases is also less.

Prior to the Green Revolution, Northwest India did not grow much rice due to its semi-arid to arid climate with an annual rainfall of less than 600 millimeters very similar to the Great Indian Thar Desert. But rice cultivation has grown phenomenally from 0.5 million hectares (ha) in 1966 to more than 5 million ha in 2010 onwards with the introduction of dwarf high-yielding varieties and transplanted rice cropping system (TPR) supported by higher uses of chemical fertilizers and irrigation.

Unwanted complications of the Green Revolution
The Green Revolution rice technologies have ensured food security of 1.4 billion Indians during the last 5 decades, it also made it possible for India to export rice, particularly Basmati rice. However, it increased the consumption of pesticides, herbicides, and groundwater.

Nitrates and phosphates from fertilizers have leached into soils. Earth-warming methane gas emissions from the anaerobic (submergence) wetland rice farming system contribute as much as 34 million tons annually with China and India making up 50% of that total.

The water-guzzling TPR system has depleted the groundwater to alarming grey zone levels in major parts of the region. This led national policymakers to shift rice cultivation to the eastern zone without providing economically and technically viable alternate cropping systems to the farmers in the northwest.

Direct-seeded rice: A water-friendly seeding technology
Before the Green Revolution rice, like other summer crops, was directly seeded and weeding was done manually because farm areas were small and labor was plentiful. Farmers in Northwest India were cultivating rice by using rain-dependent sustainable aerobic direct-seeded rice (DSR) cropping system.

Like other summer cereal crops, DSR is directly sown in dry fields without raising the seedlings in nursery beds and transplanting them. Instead, the paddy is sown either dry or wet (pre-germinated) which reduces the requirements for water, cost, energy, and labor. DSR also mitigates the greenhouse gas emissions from rice cultivation and provides a viable alternative to transplanted rice. With proper management, yields from DSR are comparable to transplanted rice.

To help alleviate some of the negative impacts of TPR, researchers at the Indian Council of Agricultural Research (ICAR) and state agricultural universities (SAUs) have developed DSR technology during 1990-1995 with an emphasis on weed control by using chemicals.

However, their DSR technology causes simultaneous emergence of rice and weeds seedlings which favors high weed infestations in DSR crops due to faulty date of sowing (15 June onwards marks the onset of monsoon rains in India) and flawed sowing method using dry DSR (sowing on the dry bed immediately after irrigation and further frequent irrigation at 3-4 days interval).

Despite government incentives, farmers have been slow to adopt DSR technology because of the need to use excessive post-emergence chemicals to control the high weed pressure. Many who tried it between 1995 and 2012 eventually returned to TPR which was a serious setback to the water-friendly DSR technology.

The TAR VATTAR DSR technology
From 2014 to 2017, while working on the research project Use of herbal hydrogels for water conservation in crops, my research team at ICAR-Karnal developed the Improved TAR VATTAR (which means “good moisture fields”) DSR technology.

Sowing is done in fields prepared after pre-sowing irrigation at 20-25 kg seed/ha and 50-60 kg seed/ha in Northwest and Central India, respectively, using a seed drill or traditional broadcasting method and maintaining the seed depth at 2-3cm.

To conserve soil moisture, the sowing is generally recommended only in the evening hours and application of weed killer Pendimethaline at 5 liters (per 500 liters of water)/ ha immediately after the sowing. After the sowing, the first irrigation is delayed by 15 to 25 days. Subsequent irrigation, using alternate wetting and drying technology, is done after 7 to 10 days based on soil type and rain pattern which make DSR crops nearly weed-free without the application of post-emergence herbicides.

In the past seven years, we observed that the sowing and emerging rice seedlings have not shown any signs of heat damage and mortality in the western dry districts of Ganganagar and Bhiwani and the eastern humid districts of Udham Singh Nagar and other areas. The high temperature (400C and above) and dry climate (less than 30% relative humidity) in these locations indicate that the rice plant has a strong inherent heat tolerance mechanism during its early growth stages like other summer food grains such as sorghum, maize, and pearl millet. (Fig.2). 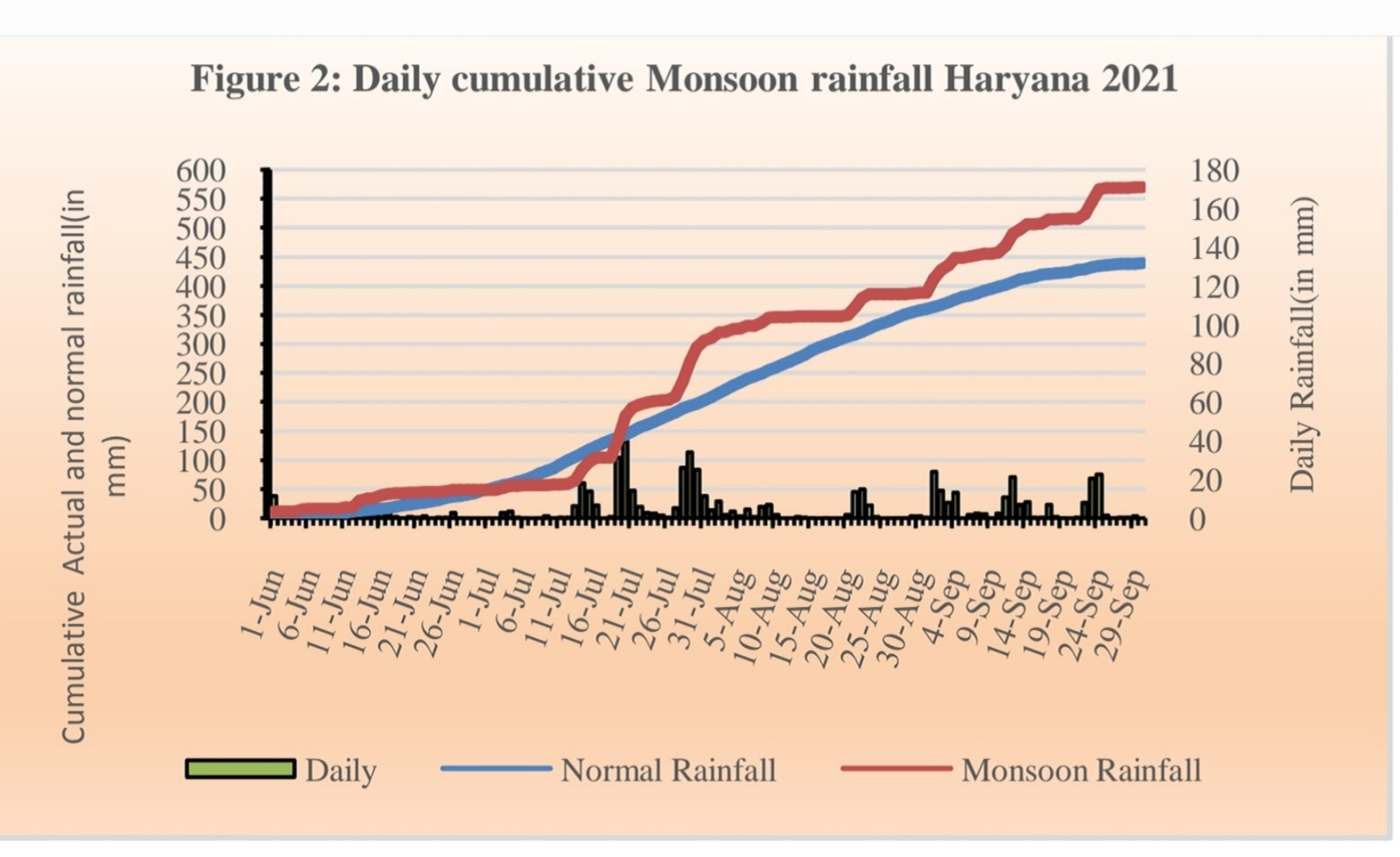 A new cropping calendar for DSR
The technology was further refined after my retirement as a farmer scientist from 2017 to 2022 to make DSR nearly weed-free by using eco-friendly weed control without using post-emergence herbicides. In the improved TAR VATTAR DSR technology, we recommended the date of sowing to be advanced during the hot and dry season (20 May to 10 June) for the irrigated zones instead of during the hot and humid season (15 June onwards) as recommended earlier by ICAR and SAUs.

In Northwest India, the relative humidity during the month of May is generally very low (less than 30%) with negligible rainy days and these climatic factors are unfavorable to weed germination and growth which makes improved TAR VATTAR DSR technology very effective in controlling weed even without the application of post-emergence herbicides

.
A lucrative technology package for farmers
Farmers, even those from arid and semi-arid zones of Northwest and Central India have successfully adopted TAR VATTAR DSR technology in large areas due to its ecologically and farmer-friendly packages of practices that greatly reduced water requirements comparable with other summer food grains and pulses.

Compared to the high cost of labor and inputs for TPR, the improved TAR VATTAR DSR technologytechnology saves them about 40% in irrigation and costs of cultivation without any yield penalty. With less energy and fertilizer consumption in DSR, production costs were lower by USD 149/ha than in TPR. The incidence of pests and diseases is also less.

Another crucially important advantage of using DSR is that it enhances groundwater recharge through rains. The conventional tillage used in TPR forms a plow pan in the soil which has less porosity that causes lateral water run-off and soil erosion during rainfall. Soils under the minimum tillage system in DSR, on the other hand, provide avenues for groundwater recharge.

It has also been reported that DSR followed by zero-tillage wheat crop resulted in higher yield and gross profit margin. The impact of this technology could be very significant since rice-wheat is the major cropping system practiced in 13.5 million ha in the Indo-Gangetic Plains.

About the author
Dr. Lather is a former principal scientist at  ICAR-IARI New Delhi specializing in genetics and cytogenetics.  For more information about this article, you may contact him through his email.