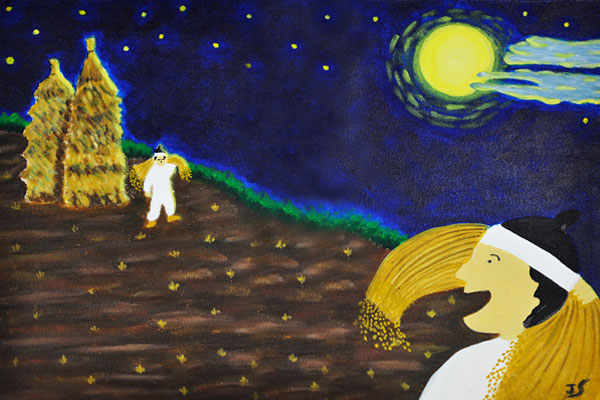 A long time ago, two brothers together owned a rice field, which was the only inheritance they received from their parents, who passed away because of old age.

These two brothers knew how their parents had valued the land, so they cared for it the way their parents did. They worked together to grow rice from plowing the soil to sowing the seeds, from weeding until the rice was ready for harvest. They were diligent and industrious; they worked on the farm from dawn till dusk. Come harvest time, their labor came into fruition. They had a very bountiful harvest, the largest in the village.

They divided the harvest equally. As they were stacking their harvest, the older brother thought, “My younger brother is newly married; he will need more rice to sell to cover the expenses of a new home.”

As soon as night came, he found his way in the dark carrying a heavy sack of rice and placed it above his younger brother’s pile of rice.

The next morning he was surprised to see that the height of his pile of rice seemed to be the same. He counted the number of sacks and wondered why the number did not change.

“I think we miscounted them when we first divided the sacks of rice between us,” he said to his younger brother.

Thinking about his younger brother, who will be starting to build a family, he decided to carry another sack of rice to add to his his brother’s stack that night.

The next morning, he went to his barn to check how many more would be left should he decide to sell some. He was shocked to know that the number was still the same. He asked his son to count it for him and lo and behold he arrived at the same number. “Well,” he said. “I’ll just carry a sack of rice to my younger brother again tonight.”

After dinner, he again loaded another sack of rice on his back and started walking on the same road to his brother’s place. The moon shone so bright that night and he could clearly see the pathway to his brother’s place. As he was halfway to his destination, he saw a silhouette of a man who seemed to be carrying a bulky load. As the shadow came nearer, the moonlight revealed the familiar face of his younger brother.

As soon as their eyes met, they both called out to each other, “Why brother!” They heartily laughed together as they both understood the mystery of the unchanging number of their respective stacks of rice. Happy to see each other, they unloaded their sacks of rice, sat down, and talked. The older brother found out that his younger brother was also thinking the same way. He thought of his older brother having many children and thus his family would consume more rice than he would. Surely his older brother could use some of his rice.

It is said that the story of the loving ways of these two brothers was the talk of the village. It spread from village to village until it reached far and wide.

Ms. Shim-Chin likes telling stories, an activity she enjoyed when she was a preschool teacher in South Korea. She temporarily gave up her job in Korea to join her husband, IRRI plant breeder Joong Hyoun Chin, and their children in the Philippines. She devotes some of her free time to painting.