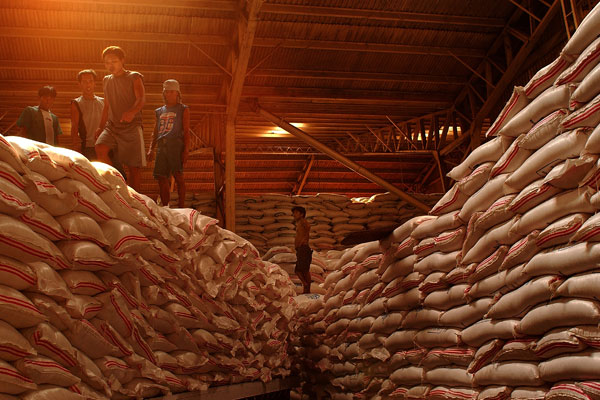 A SHIPMENT of rice in a warehouse in Manila, Philippines (Photo: IRRI)

Historically, a small amount of rice is traded globally compared with other crops such as wheat, corn (maize), and soybeans. However, after remaining stagnant for almost two and a half decades, rice trade expanded in the late 1980s in the wake of trade liberalization in many countries and the General Agreement on Tariffs and Trade in 1994.

Rice is a political commodity in the majority of Asian countries and its price is an important barometer of government performance. Thus, it becomes imperative for policymakers to control rice trade flow for domestic rice market to be stable. State agencies are involved in controlling the flow of rice in and out of countries and, in many cases, they also take part in importing/exporting rice through government-to-government (G-G) contracts.

The rice export market is highly concentrated with the top five rice exporters accounting for 80% of global rice trade. Of the five top exporters, four (Thailand, India, Vietnam, and Pakistan) are from Asia. Thailand has occupied the top spot for the most part of the past four decades. For these Asian rice-exporting countries, rice is still the most important staple, and domestic food security and strategic reserve is extremely important.

Unlike the high concentration in export market, the import side is quite fragmented. The top five rice importers account for around 30% of the total trade and the top ten account for less than 50% of total imports. Many of the major importers, including the current top importer, China, are from Asia and account for a quarter of the total trade. The other major importing regions are the Middle East and Africa, with nearly half of the total global trade. These two are the fastest growing rice markets, with the trade volume doubling from 10 to 20 million tons in the past decade.

Global rice trade can be broadly divided into fragrant and nonfragrant rice. The fragrant rice market includes basmati and jasmine rice while the nonfragrant rice market includes white, parboiled, and glutinous rice. In the case of basmati trade, India and Pakistan export 100% of this rice to all parts of the world, with Middle Eastern countries as the major destinations, followed by the European Union. In the past 15 years, the global trade of basmati rice has grown from 1 to more than 4 million tons, with India capturing almost all the market expansion while Pakistan’s market share declined from 50% to less than 20% during the same period.

In the past decade, the volume of jasmine trade was growing at a snail’s pace from 1.7 million tons in 2005 to 2.5 million tons in 2013 (Source: The Rice Trader). The major markets for jasmine rice are the United States, China, Hong Kong, Singapore, Ghana, Côte d’Ivoire, and Malaysia. In addition, 600–700 thousand tons of 100% broken jasmine rice, primarily Thai Hommali, are mostly exported to three West African countries, namely, Senegal, Côte d’Ivoire, and Ghana.

In the case of white and parboiled rice, the market is segregated based on the percentage of broken rice (major types are 5%, 15%, 25%, and 100%). All major exporters are involved in white rice trading to all parts of the world. On the contrary, the majority of parboiled rice originates from India and Thailand, with African and Middle Eastern countries as its main destinations.

Since the 2007-08 rice crisis, many rice-consuming countries have been reluctant to depend on imported rice and have rolled out measures to improve self-sufficiency. Many rice-importing countries have initiated programs to expand their rice production and reduce their dependence on foreign rice.

Both India and China have also emerged as major players in the global rice market in the past few years with India’s unprecedented rise to the top of the export chart and China’s unexpected rise to the top of the import chart (Fig. 2). In 2012, India displaced Thailand from the top spot by exporting 10.4 million tons of rice vis-à-vis 6.9 million tons for Thailand. Like India, nobody expected China to become the largest importer of rice in the world, displacing Nigeria, with 3.5 million tons of imports in 2013.

India’s lifting of its export ban on the nonbasmati market in late 2011 after a 4-year gap, burgeoning domestic stocks, and a weak rupee supported India’s exports in the past two years. But, earlier in 2014, Thailand stopped the rice pledging scheme and has regained the majority of markets lost to India in 2012. Thailand recaptured the top spot in 2014 and is expected to further strengthen its position in 2015.

Despite all these uncertainties, the global rice trade will continue to rise in the future. The rising popularity of rice in many non-Asian countries, including parts of Africa and the Middle East, is likely to greatly contribute to the uptrend in rice trade. A lot depends on Africa, where rice consumption is expected to grow much faster than in any other regions in the world. Based on our projections, 112 million tons of additional rice will be needed globally by 2040 and nearly 40% of this additional demand will be coming from Africa. If African production growth cannot keep pace with its rising consumption, then the continent will emerge as a growing importer of rice from Asia.

Many Asian countries are likely to simultaneously export and import different types of rice as consumers diversify their diet and create demand for different types of rice. China, however, remains the biggest question mark in the rice market. It appears that the rapidly rising costs of production, pressure on rice area from competing crops, and water shortages are likely to make imported rice an attractive option for Chinese traders. In addition, the demand for different types of rice such as sticky rice from Vietnam, jasmine rice from Thailand, and long-grain rice from Pakistan is growing as Chinese consumers diversify their consumption habit with rising income. As long as the Chinese government is not strongly determined on self-sufficiency and allows imported rice to enter the country, it is reasonable to assume that Chinese imports will steadily rise in the near to medium term. On the export side, the current major exporters (India, Thailand, Vietnam, and Pakistan) will continue to remain in the market, while Myanmar and Cambodia have the potential to upgrade their rice sectors and become bigger exporters in the future.

Dr. Mohanty is the head of the Social Sciences Division and program leader (Targetting and policy) at IRRI.