Coastal areas are mostly affected by climate change and natural disasters such as storms and floods and abiotic stresses such as drought and salinity. As a result, farmers are losing their interest in rice cultivation, being affected by these natural calamities again and again. The impact of climate change on rice production seems to be negative and, thus, alarming. It is a major threat to Bangladesh, and particularly raises the risk to food security in the country. The concept of climate change is still relatively new to the people of Bangladesh and awareness is very low. On the other hand, the national economy strongly depends on agriculture and natural resources, which are now susceptible to climate change and sea-level rise. 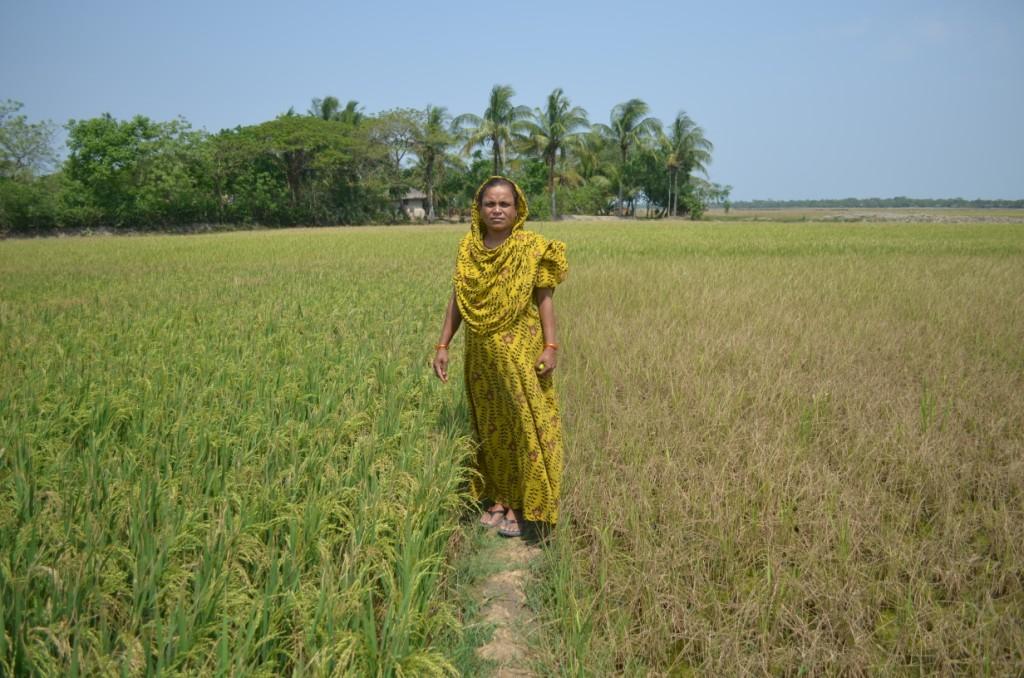 Increased salinity during the dry season in the coastal belt hampers rice production in areas that were once suitable for growing rice. Farmers’ rice production is low in the boro season because of high salinity intrusion. Hence, poor farmers in these areas suffer, since cultivating rice is the only way to feed their family members. According to the Soil Resource and Development Institute (SRDI), around 0.74 million hectares of land are being cultivated in the coastal region, out of which around 0.38 million hectares are now salt-affected, where salinity is increasing year after year. Out of 0.38 million hectares of salt-affected land, a survey indicates that around 0.33 million hectares are affected by salt up to 12 dS/m, whereas the remaining areas are even more affected than that. In earlier days, farmers used to cultivate rice in the dry season (boro) and obtain a very good yield and income. But, in recent times, because it was difficult to gain high yields because of increased salinity and severe scarcity of fresh water, farmers in coastal areas have left boro rice cultivation. As a result, around 0.3 million hectares of land now remain fallow in the coastal region.

We visited Sreefalkathi, a vulnerable saline-prone village that was affected by Cyclone Aila in 2009. Sreefalkathi is in Ishwaripur Union under Shyamnagar Upazila of Satkhira District, and is one of the most salt-affected areas in the coastal region. A total of 1,308 farmer families reside in the village where rice farming is the only source of livelihood. Most of the villagers have some land, in which they cultivate only aman rice in the monsoon season. Before Cyclone Aila, farmers used to cultivate two to three crops in a year and earn a reasonable income from agriculture. But, because of the tropical storm, their land became too salty that they failed to have any reasonable harvests in the dry season after that. Almost every year, during the boro season (November to May), salinity increases in the soil of this village and a white film of salt covers the paddy fields. This means that the soil contains salt and this is a threat to crop production. Climate experts predicted that the increasing amount of salt in these crop lands will cause the area’s landscape to become barren in the near future.

In order to overcome this adverse situation, the International Rice Research Institute (IRRI), under a joint collaboration with the Bangladesh Rice Research Institute (BRRI) and Bangladesh Institute of Nuclear Agriculture (BINA), developed four salt-tolerant rice varieties for the boro season. Under collaboration with IRRI, BINA developed ‘Binadhan-8’ and ‘Binadhan-10’, whereas BRRI developed ‘BRRI dhan47’ and ‘BRRI dhan55′. All these four varieties that have the capacity to fight salinity can survive up to 10 dS/meter of salinity. These varieties have started reaching the farmers through government and international agencies like IRRI. These varieties have a yield potential of 5–7 tons per hectare at normal conditions in non-saline areas, whereas yield will be from around 3 to 5 tons per hectare in saline-prone areas, depending on the degree of salinity.

In 2012-13, IRRI, through the Stress-Tolerant Rice for Africa and South Asia (STRASA) and USAID (United States Agency for International Development) projects, established a huge number of demonstration trials and distributed small seed packets of four salt-tolerant rice varieties to the farmers through the government’s Department of Agricultural Extension (DAE) and local partner NGOs, as well as local private seed producers. Nakshikantha, a partner NGO of IRRI, provided training on cultivation, seed production, and seed preservation of salt-tolerant rice varieties to selected farmers of Sreefalkathi for four demonstration trials. They did this through local agricultural extension officials, who, on the other hand, provided the seeds of salt-tolerant rice varieties Binadhan-8 and Binadhan-10 and other inputs accordingly. They also provided mini seed packets to other farmers in the same village.

All the selected households that have irrigation facilities established their demonstration trials side-by-side their traditional rice varieties to understand their potential differences. Mr. Tapan Karmakar, an officer of Nakshikantha, took the lead to follow-up and monitor such plots together with local government agricultural officials and IRRI field staff. Salt-tolerant rice cultivation is only possible in saline-prone areas where surface water is available in nearby ponds and canals. Scarcity of irrigation water is still a big problem in cultivating rice in most of these coastal areas.

During the growing stage of the rice plant, it was found that the number of tillers was less in the traditional (non-salt-tolerant) rice variety, compared to the salt-tolerant rice variety. Also, in the flowering stage, it was observed that a significant number of panicles in the traditional rice plants were whitening with partially empty grains, which result in poor yield. The same scenario was observed in the last couple of years. Rice scientists confirmed that this happens because of increased salinity. However, in the adjacent plot, where farmers cultivated newly developed salt-tolerant rice varieties such as Binadhan-8 and Binadhan-10, there were no such symptoms and they showed very good performance. At the end of the season, the production brought a revolution among all the farmers of the area. It was beyond their dream that such a bumper crop could be grown in the boro season after Cyclone Aila. The average yield of the four farmers’ demonstration trials was 4 tons per hectare, which was quite satisfactory in salt-affected areas.

The neighboring farmers in that area were surprised to see such production. This encouraged the entire farmers’ community to go for boro rice cultivation again with these salt-tolerant rice varieties. The demonstration farmers saved seeds for their own use, while many other farmers obtained seeds from them for the next season.

The project organized a promotional campaign in the village where DAE, NGOs, local elites (considered the village leaders, elected chairman and member of union parishad, teachers, senior people in the village) and more than a hundred farmers observed the significant differences between traditional and newly developed salt-tolerant rice varieties, and realized the outstanding performance of the salt-tolerant rice varieties in their salty lands. In the campaign, the project personnel and local elites requested that the demonstration farmers not consume the seeds of the salt-tolerant rice varieties this year, but to sell and distribute them to their neighbors, relatives, and other farmers for dissemination in the community. With that, the concerned NGO and community leaders took the responsibility of dissemination.

In 2013-14, the picture was completely different. IRRI did not provide any inputs to this village, but just had a close follow-up along with partner NGOs and local agricultural officials. Around 68 farmer families of Sreefalkathi, those that have irrigation facilities, chose Binadhan-8 and Binadhan-10 for their capacity to yield well in salty lands. All of them successfully harvested the crop and were ensured of a higher yield. Farmers of Sreefalkathi are now happy to receive these two varieties, which can grow easily in their salt-affected lands.

Mr. Tapan Karmakar mentioned that most of the farm households in this village received/purchased seeds of these two salt-tolerant rice varieties this year. In support of this, the NGO will manage irrigation facilities in any way by digging water reservoirs near the farmers’ lands. He expected that the whole village community will go for boro rice cultivation with this newly developed rice seeds. If it is possible to bring fallow land in the coastal region under rice cultivation through salt-tolerant rice varieties, it will be possible to produce at least one million tons more of rice, which will not only ensure food security at the household and community level, but also at the national level for our future generation.