Thousands of farmers in drought-prone Tripura Province welcomed the release of 16 new varieties of different crops, including nine drought-tolerant rice varieties, at an event organized by the Indian Council of Agricultural Research (ICAR), Research Complex for North Eastern Region, at its research center in Lembucheera. The released lines have high yield potential that provides a yield advantage of 1.0−1.2 tons per hectare under moderate to severe drought over presently cultivated varieties. The farmers of Tripura also showed their preference for these varieties during participatory varietal selection trials. 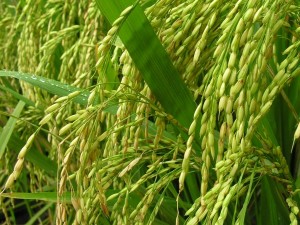 Tripura Khara Dhan 2 is one of the newly released drought-tolerant rice varieties.

Manik Sarkar, chief minister of Tripura Province, presided over the ceremonial release of the varieties. Mr. Sarkar expressed his gratitude to the scientists at ICAR and the International Rice Research Institute (IRRI) for making the new varieties available to farmers and for working together to increase rice production in the province.

Dr. S.V. Ngachan, director of the ICAR Research Complex, reiterated the commitment of ICAR to increasing the productivity of different crops as well as fisheries and poultry in the northeastern region of India. Dr. Arvind Kumar, leader for rainfed lowlands in the South Asia plant breeding group at IRRI, encouraged state agencies to undertake a systematic seed multiplication program for the newly released varieties in order to reach every farmer in the province.

The new rice varieties released included five drought-tolerant breeding lines developed at IRRI by the Stress-Tolerant Rice for Africa and South Asia (STRASA) project funded by the Bill & Melinda Gates Foundation. These varieties were evaluated by the Drought Breeding Network in several locations in India, including ICAR in Lembucheera and the All India Coordinated Rice Improvement Program (AICRIP) coordinated by the Directorate of Rice Research in Hyderabad.