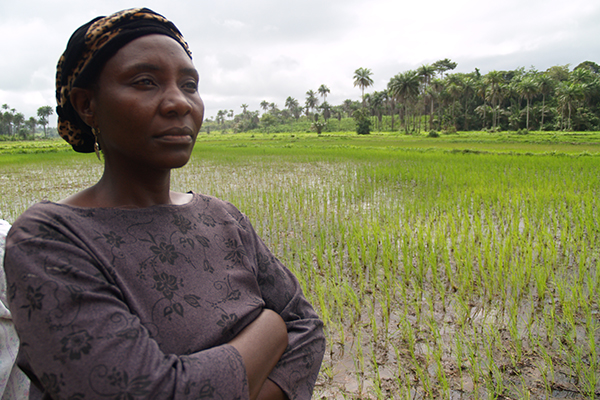 RICE IS the most important staple in Sierra Leone, and Liberia, however, the Ebola crisis threatens to undo the progress made in improving domestic production. (Photo: R Raman, AFRICARICE)

April is the cruelest month,” wrote T.S. Eliot in The Waste Land. It was as if he were voicing the sentiments of the farming communities in Ebola affected countries—Liberia, Sierra Leone, and Guinea. Though the time for planting has come, there is a desperate lack of labor and inputs, particularly seed, as hungry rice farmers ate the seeds they would have normally stored for planting in April.

Although there are signs that the Ebola epidemic is being contained in the three countries, a major food crisis is looming unless urgent steps are taken to tackle food security concerns, according to 2014 reports by the United Nations Food and Agriculture Organization (FAO) and the World Food Programme (WFP).

According to their estimates, the Ebola virus outbreak left slightly more than half a million people in the three countries “severely food insecure”—120,000 in Sierra Leone, 170,000 in Liberia, and 230,000 in Guinea.

The total number of affected people could double to one million in a few months unless urgent measures are taken to significantly enhance access to food and safeguard crop and livestock production in these countries, they warned.

The crisis has been further aggravated because Liberia and Sierra Leone were still recovering from prolonged civil wars while Guinea was still transitioning from military rule when Ebola struck.

In December 2014, the government of Sierra Leone banned all public celebrations, including Christmas and New Year, to prevent Ebola from spreading further. Similarly, Guinea, where the latest Ebola outbreak started recently, declared a 45-day “health emergency” in five regions in the western and southwestern parts of the country.

Shock to food and agricultural sectors 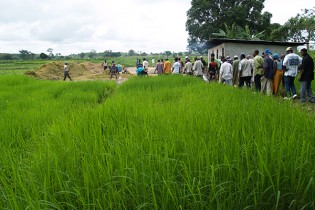 FAO and WFP stated that the Ebola epidemic had caused a significant shock to the food and agricultural sectors in the affected countries, where two-thirds of the people depend on agriculture for their livelihood. A number of interrelated factors, including quarantines, disruptions in transportation and trade, and rising food prices were triggering the food crisis.

Experts participating in the Global Rice Market and Trade Summit organized by the International Rice Research Institute in Thailand in October 2014 remarked that there was a noticeable rise in local rice prices in the affected countries, although the Ebola crisis was not expected to have a major impact on the global rice market.

The virus killed many productive farmers and many others abandoned their fields and harvests out of fear. In Sierra Leone, for instance, up to 40% of the farms in the worst affected areas were reported abandoned.

Impacts on the rice sector

Rice is the most important staple in the three countries and its price and accessibility directly influence social stability. Annual per capita consumption of rice (about 100 kg) is among the highest in sub-Saharan Africa. However, all three countries are net importers of rice as demand is much higher than local production.

Promoting domestic rice production is therefore important in the national rice development strategy developed by each of these countries under the Coalition for African Rice Development framework.

The national programs of these countries are involved in many joint projects with the Africa Rice Center (AfricaRice) and have identified Rice Sector Development Hubs. A rice hub is a mechanism introduced by AfricaRice across sub-Saharan Africa to concentrate R&D efforts and connect partners along the rice value chain to achieve greater impact.

In the past few years, AfricaRice has been providing targeted support to Liberia and Sierra Leone at their request to revive their respective rice sectors, under the World Bank-funded West Africa Agricultural Productivity Program (WAAPP). The main focus of this support is to make improved seed and technologies available to farmers, enhance rice quality, and develop a critical mass of scientists, technicians, extension workers, and seed producers.

Unfortunately, the Ebola crisis threatens to undo the progress made in all these areas. According to FAO, 2014 rice production was expected to decline by 12% in Liberia, 8% in Sierra Leone, and 4% in Guinea. But, there are big disparities within the region: production is down by 20% in Liberia’s Lofa District, which is the main rice-producing region and is considered as Liberia’s breadbasket, and by 17% in the hardest hit parts of Sierra Leone.

“The Ebola outbreak in Liberia is a complete setback to our achievements,” said AfricaRice scientist Inoussa Akintayo, who is coordinating a World Bank-supported emergency rice project in Lofa and Bong districts in Liberia.

In August 2014, for reasons of safety, senior management of AfricaRice decided to pull out its regional and international researchers from Liberia and Sierra Leone. “This has affected the implementation of the planned activities,” said AfricaRice scientist Bert Meertens, who is assisting the Sierra Leone Agricultural Research Institute in WAAPP activities.

A call for urgent action

Aside from controlling Ebola, FAO and WFP called for urgent action to re-establish farming systems in the three countries. Measures should enable the most vulnerable people to access agricultural inputs, such as seeds and fertilizers, and adopt improved technology to overcome labor shortages.

AfricaRice has been actively involved in discussing and planning strategies to make improved rice seed available to farmers with strong support from donors as well as the Economic Community of West African States.

In December 2014, the Center participated in Seeds for Agriculture in Ebola-affected Countries, a workshop organized by the African Development Bank in Abidjan, Côte d’Ivoire. The Center has been invited by the World Bank to join its efforts in providing rice seed to farmers in Ebola-hit countries in time for the 2015 planting season.

A USAID-AfricaRice initiative aims to provide technical support to the seed sector in selected countries, including Liberia. With support from the Government of Japan, AfricaRice is launching an emergency project to tackle the problem of insufficiency of rice seed in Guinea because of the Ebola crisis.

Meanwhile, remembering the quiet heroism of scientists in these countries, AfricaRice economist Ali Toure, who was working in Sierra Leone, remarked, “We are praying for the safety of our brave colleagues, who are continuing their work under very difficult and even dangerous situations.”