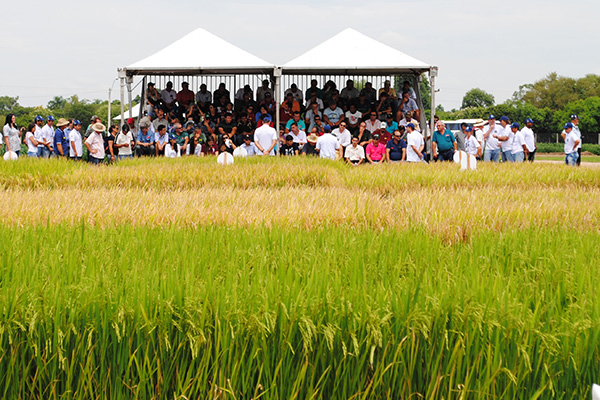 There is one occasion that Brazilian farmer Geovano Parcianello never misses. Every year, he travels 503 kilometers from his farm in the municipality of Alegrete to the city of Cachoeirinha, where the most important rice experiment station in the state of Rio Grande do Sul is located. Being there with a thousand other rice growers gives Mr. Parcianello an opportunity to find out about new varieties, disease control measures, and options for crop rotation—knowledge he can apply on his own 900 hectares of rice. 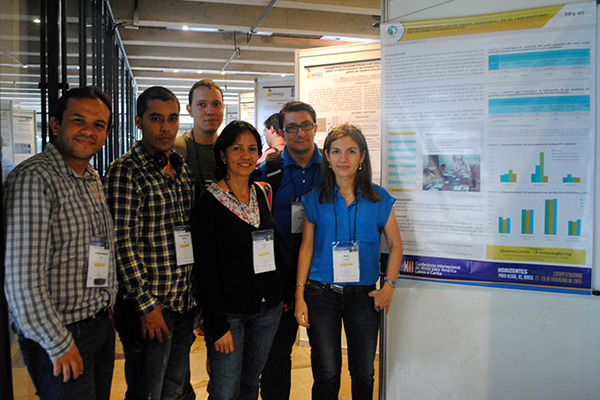 BOTH INDOORS via poster sessions and other presentations, conference participants learned about the latest developments in rice genetics, crop improvement, agronomy, and the effects of climate change. (Photo: Adriana Varón Molina)

This year, the “technology festival” organized by the Rice Institute of Rio Grande do Sul (IRGA) had an extra dimension. Not only did participants come from places such as Alegrete, Santiago, San Antonio, and Itaqui but they also came from 33 countries of Latin America and the Caribbean (LAC), Europe, and Asia, making the field day international. The foreign guests were among 460 participants at the XII International Conference on Rice in Latin America and the Caribbean, which took place in Porto Alegre, Rio Grande do Sul, on 23-26 February 2015.

“Listening to presentations on topics such as genetics, crop improvement, agronomy, and climate change, and visiting the field plots opened our minds to what’s happening in the rice sector, not only in the region but in the whole world,” said Eliécer Araya, president of Costa Rica’s National Rice Corporation (Conarroz, its acronym in Spanish). “This also gave us an opportunity to further reinforce the knowledge network that strengthens us all.”

Taking LAC’s rice sector to new “horizons of competitiveness”—the slogan of the conference—is a central aim for organizations such as the Latin American Fund for Irrigated Rice (FLAR) and its 35 members, the International Center for Tropical Agriculture (CIAT), IRGA, and the Brazilian Agricultural Research Corporation (Embrapa). The regional alliance draws as well on support from the International Rice Research Institute (IRRI), CGIAR’s lead center for the Global Rice Science Partnership (GRiSP)—which believes in the important role of this region in the coming decades to meet the rising global demand for rice.

High productivity (with some countries obtaining yield as high as 16 tons per hectare), extensive mechanization, the use of direct seeding, and excellent grain quality are among the key features of LAC’s production that are attracting world attention.

“Latin America has enormous land resources and abundant water, and its rice production is technically advanced,” said Robert Zeigler, IRRI director general. “The challenge for this region is to analyze global markets carefully and design strategies that will enable production to meet demand.”

Joseph Tohme, director of CIAT’s Agrobiodiversity Research Area, stressed the importance of regional integration through networks such as FLAR and the Consortium on Hybrid Rice for Latin America (HIAAL). “CIAT’s Rice Program helps countries across the region to strengthen their capacity and make production more competitive by using the genetic materials and agronomic practices that we and FLAR are developing,” Dr. Tohme said.

“Strategic alliances are what can make us strong as a region,” said Flavio Breseghello, director general of Embrapa Rice and Beans. “The presence of Asian scientists in Latin America, thanks to GRiSP, makes them more aware of our strengths and us more aware of theirs. The good practices of each continent complement one another.”

National governments have a key role to play in building strategic alliances, explained Bas Bouman, GRiSP director. “The way forward is to strengthen national capacity, working side by side with governments and their programs, and devise strategies that enable countries in LAC to compete with the biggest rice producers in the world.”

Ingredients of a production miracle

“There’s little point in doing research without extension. The most important thing is transferring knowledge to producers—that’s the key,” said Carlos Pereira, former president of IRGA, who now works as an agronomist with the state’s Agricultural Secretariat.

IRGA, with its 75-year history, offers a good example of how the rice production chain can be strengthened. In 10 years, growers in Rio Grande do Sul managed to raise average rice yield by 50%. This production miracle resulted mostly from a training program created for 100 IRGA technicians and extension agents from private companies and farmer cooperatives.

“We reviewed the latest knowledge from different research centers—CIAT, IRGA, IRRI, and universities—and took it to the field by means of the technicians,” said Sergio Gindri, an IRGA researcher. “It was important to develop consistent messages on basic concepts, such as early weed control and the use of high-quality seed of improved varieties. But the route by which the Latin America and the Caribbean region reaches its goal of serving as a food basket for the world won’t be easy.”

“To position ourselves in international markets, we have to tackle basic issues such as seed quality, improved infrastructure for exports, and lower operating costs, with the aim of offering a higher quality product at a lower price,” said Eduardo Graterol, FLAR’s executive director. “The goal is to place surplus production in international markets, while ensuring that each country can supply enough rice for its own population.”

The sun-drenched international field day ended with a banquet for Mr. Parcianello and the rest of the 1,500 guests, who feasted on carreteiro, a typical dish of Rio Grande do Sul, in which rice, of course, is the main ingredient—just as it is in the daily diets of more than half of the global population.

Ms. Varón Molina is communications coordinator for Latin America and the Caribbean at CIAT.