Combining traditional and modern breeding techniques, researchers in Korea have succeeded in the perilously difficult task of making Korean
rice varieties resistant to one of the crop’s most destructive diseases. 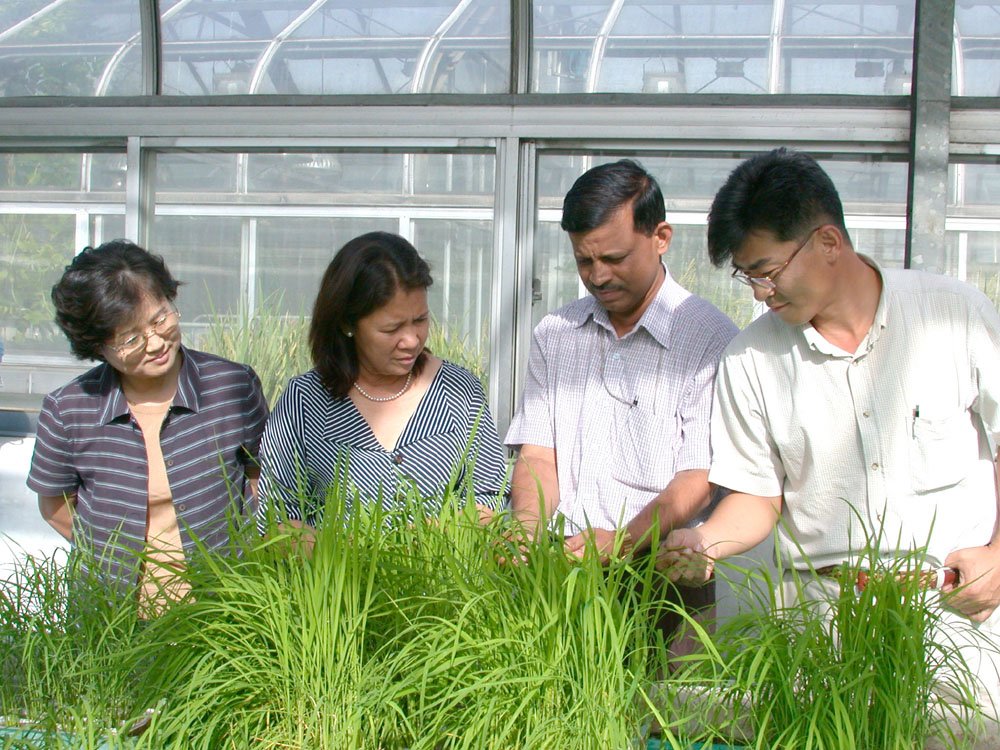 The rice fungal disease known as blast is a scourge to farmers across the rice-growing world. It has been estimated that, each year, the disease kills enough rice to feed 60 million people. An outbreak of blast can devastate rice fields, completely destroying crops in the most extreme cases. And, although it thrives in the humid tropics (Improving the sacred) blast is also a major problem in temperate countries such as Korea and Japan, and those in central Asia.

“South Korea suffered serious yield loss due to blast in the 1990s, primarily because of a lack of resistant rice varieties,” says Dr. Moon Huhn-Pal, chairman of the Agricultural Advisory Committee of the South Korean Rural Development Administration (RDA).

In this light, a team at the International Rice Research Institute (IRRI)–Korea Offi ce began in 2002 the search for a rice gene that offered blast resistance and could be used to develop japonica rice varieties resistant to a range of blast types. (Japonica rice is largely grown in temperate regions, as opposed to indica varieties, which tend to be grown in the tropics.) The researchers knew from the outset that the project would be a great challenge. Japonica rice germplasm (seeds and the genetic material they contain) has very narrow genetic diversity— finding a reliable genetic source of resistance to different types of the blast fungus Pyricularia grisea would prove difficult. Moreover, the complex life cycle of the fungus makes it necessary to develop rice varieties with durable resistance to blast that are appropriate for commercial cultivation but won’t damage the environment.

Rice blast occurs in two forms: leaf blast and neck (or panicle) blast (photo). The fi rst phase of the project was to find suitable germplasm that could donate reliable resistance genes into the resistance-gene-defi cient japonica varieties.The researchers began by exposing a number of rice varieties—including traditional Korean varieties, breeding lines that had had genes from wild rice species bred into them, and other japonica varieties—to 15 types of blast that cause the disease frequently in japonica varieties.

Initially, the scientists inoculated 20-day-old seedlings with different blast types and, after seven days, studied the resultant blast-caused lesions. One indica rice variety was not affected by any of the types of blast, ultimately showing strong resistance to more than 30 Korean blast types and ten Philippine blast types and so proving itself the leading candidate as a new source of blast resistance. Next, the challenge was to get the blast resistance gene from the indica variety into Korean japonica rice varieties—something easier said than done.

“While incorporating the new gene for blast resistance into the Korean cultivars, we need to retain the grain quality characteristics of japonica rice that Korean rice consumers demand,” explains Dr. Choi Hae-Chun, senior rice breeder at the RDA’s National Institute of Crop Science.

The task, therefore, was to introduce a new blast resistance gene into a Korean rice variety and retain all the desirable japonica characteristics. Finding a source of blast resistance is hard enough; putting it into the genome of Korean varieties multiplies the difficulty again. In many cases, japonica genomes will reject a gene from anindica genome because the combination causes hybrid sterility.

The solution is to find a suitable japonica and donor indica combination. The researchers approached the challenge with both conventional breeding (crossing different varieties) and molecular breeding (examining and manipulating specific parts of the genome in the laboratory—although this can include genetic engineering, the IRRI-Korea team did not employ genetic engineering techniques). In this way, they introduced the gene into several japonica varieties and were able to pinpoint the gene’s position in the rice genome.

One of the most important and difficult tasks is to link the resistance gene with a DNA marker—a segment of DNA that is linked to an allele (version of a gene) that controls an important trait and can easily be detected in the lab. Researchers can then perform a technique known as marker-assisted selection (see On your mark, get set, select!), which allows rapid screening of large numbers of plants. After several hundred crosses were made between the Korean japonica variety and the donor indica variety, marker-assisted selection was used to identify which of the crosses had inherited the blast resistance gene.

The researchers then studied the most resistant new japonica plants in more detail, evaluating their agronomic traits, grain quality traits, and the durability of their resistance. Suitable japonica breeding lines with strong blast resistance are now in the pipeline.

Although these will initially be most useful in the temperate regions where japonica rice grows best, the prized new germplasm can also help researchers in tropical countries where rice blast is a problem.

Ultimately, the new breeding lines will allow the production of commercial rice varieties that give farmers the chance to cultivate high-yielding rice with good grain quality and remain confident that they can keep the scourge of rice blast at bay.