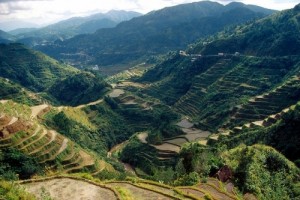 My American husband certainly is not alone as a foreigner with a keen interest in the Ifugao and our rice terraces. My people have been the subject of articles that date back to the early days of National Geographic magazine. Dean C. Worcester, then the secretary of the interior of the Philippine Islands, featured the Ifugao in a special September 1912 issue of the publication devoted entirely to the headhunters of northern Luzon. In that issue, he considered the Ifugao to be barbarians who were nonetheless excellent hydraulic engineers, as demonstrated by their marvelous rice terraces.

Nine decades later, foreigners are still fascinated with headhunting. The practice was abandoned long ago by the Ifugao, but we still have not escaped that moniker. In the 2000 book The Last Filipino Head Hunters by David Howard, we are described, along with our sister tribes the Bontoc and Kalinga, as having among our elders the last living headhunters in the Philippines. I seriously doubt that anyone now alive has ever been a headhunter.

Throughout the 1990s and into the 21st century, there has been continued interest in the direction and pending disappearance of our 2,000-year-old rice terraces and related rituals and culture. In 1995 there was a flurry of activities and meetings in Manila and Banaue — some of which I attended — to formally nominate our rice terraces for inclusion in the United Nations Educational, Scientific and Cultural Organization (UNESCO) World Heritage List as a protected cultural landscape.

Later that year, when officially adding the terraces to the list, UNESCO stated: “For 2,000 years, the high rice fields of the Ifugao have followed the contours of the mountain. The fruit of knowledge passed on from one generation to the next, of sacred traditions and a delicate social balance, they helped form a landscape of great beauty that expresses conquered and conserved harmony between humankind and the environment.” During its annual summit in December 2001 in Helsinki, UNESCO noted its continued deep concern for the rice terraces by putting them on its List of World Heritage in Danger. It stated, in part: “Despite efforts to safeguard the site by the Banaue Rice Terraces Task Force and the Ifugao Terraces Commission, more resources, greater independence and an assurance of permanence are needed.”

Excerpted and adapted with permission from Chapter 13, let’s Hope the Bile Is Good!, in The Art of Rice: Spirit and Sustenance in Asia, edited by Roy W. Hamilton, UCLA Fowler Museum of Cultural History. Available from the University of Washington Press.