The future of agriculture lies in the next generation of leaders who will face the tough challenges of poverty and hunger, limited natural resources, and the impact of climate change. Empowering young people to be catalysts of change can help solve many challenges in the future. Young scientists must play a leading role in such efforts to help shape a new image for modern agriculture. 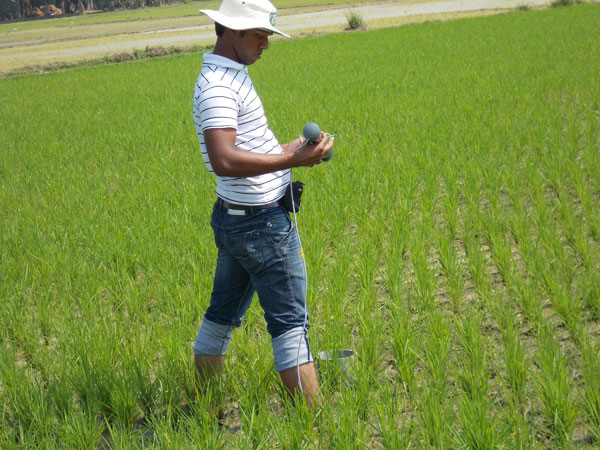 Bibhu Prasad’s interest in working with farmers grew upon moving to the rice belt of Sambalpur in Odisha (Photo: CSISA)

One of the essential resources in agriculture is water. For instance, it takes 2,497 liters of water to produce one kilogram of rice. With climate change, water supply of farmlands will be greatly affected. By 2025, around 15–20 million hectares of irrigated rice will suffer from some degree of water scarcity. Given this adverse scenario, managing water resources will be a tough challenge and improved water management through water-saving practices will be vital in safeguarding agricultural production in the future.

Empowering young people to be catalysts of change can help solve many challenges in the future. Young scientists must play a leading role in such efforts to help shape a new image for modern agriculture.

Bibhu Prasad: a passion for working with Odisha’s farmers
Born in the coastal Puri District of Odisha, Bibhu Prasad was introduced to agriculture early on in life. His father worked in an agricultural company marketing pesticides. Driven by his ambition to serve people in farming communities through rural development, Mr. Prasad received his bachelor’s degree in agriculture at Orissa University of Agriculture and Technology (OUAT). His interest in working with farmers in rural areas grew upon moving to the rice belt of Sambalpur in Odisha after graduation. He is pursuing his master’s degree in extension education in the same university.

Mr. Prasad is one of the nine students who received a research grant under the collaborative research activities of the Cereal Systems Initiative for South Asia (CSISA) and OUAT. Funded by USAID and the Bill & Melinda Gates Foundation, CSISA makes use of strategic partnerships, participatory technology development, future-oriented cropping systems, research, and capacity building to catalyze locally appropriate, sustainable change in rural communities within and across South Asia. In 2013, the university sought support for capacity building of young scientists who will conduct their research and catalyze its delivery process.

Since January 2014, Mr. Prasad has been studying the adoption behavior of rice farmers toward alternate wetting and drying (AWD) technology in Puri.

“AWD is a new technology for Odisha. It’s interesting as it is a very simple and low-cost technology,” Mr. Prasad beams. “It is beneficial for Odisha farmers during the rabi season when irrigation is a major constraint. ”

His goal is to advance research on AWD in Odisha and develop extension models for dissemination of the technology. “We are trying to disseminate the AWD technology to the farmers and study their adoption behavior in terms of their knowledge and attitudes, as well as constraints in adopting AWD. Along with this, we will observe the operational efficiency of the technology for the microfarming situation in Odisha,” he adds.

Farmers were exposed to the technology through awareness meetings, field days, information materials (fact sheets), and face-to-face interaction. Mr. Prasad is also conducting a survey to assess some socioeconomic parameters.

“After working with CSISA for more than a year through this scholarship program, I became familiar with new technologies, experienced hands-on training, and was exposed to research,” he said. “I get an opportunity to work directly with the grassroots farmers. I am confident that this experience will help me in the future to solve some problems of rice consumers and producers. I am now aware of different resource conservation technologies, which will help the lives of poor and smallholder farmers.” 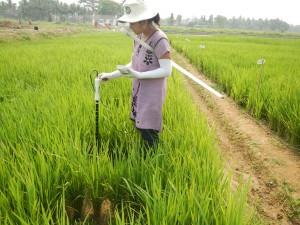 Ipsita Kar: Overcoming poverty through rice science
Ipsita Kar finished her schooling in Delhi Public School, Nalco, and pursued her bachelor’s degree at OUAT. She moved to Meghalaya to take her master’s degree at Central Agricultural University. Now, she is studying her PhD in Agronomy in OUAT under the CSISA-OUAT collaborative project.

“Working with CSISA has opened up my mind and broadened my view toward practical research, which would help people,” Ms. Kar shares.

In 2014, the scholarship program gave her the opportunity to attend the Rice Research to Production training course at the International Rice Research Institute (IRRI) headquarters in the Philippines.

“The qualitative work being done at IRRI motivated me to give more insight about my research,” she says. Her research on water management aims to minimize water use without yield loss. “When I become a rice scientist, I will use what I’ve learned from my training and visits to advance agricultural research, which will help overcome poverty.”

Ms. Ebron is a public relations officer at IRRI