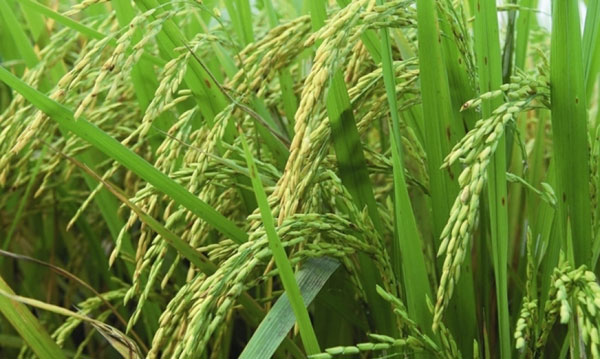 Prabhjit woke to the sound of the roosters crowing, just as her mother, grandmother, and countless generations of women in the state of Odisha in eastern India had always done. In the cool morning, she wrapped herself in her green and gold sari, washed her face, and braided her hair. Peering into the mirror, she daubed the vermillion bindi on her forehead and sat back cross-legged to meditate. She concluded by kneeling at the small altar to Parvati, lit an incense, and uttered a prayer for Grandmother on the anniversary of her death.

But Prabhjit’s next morning ritual was different. Moving into the living room, she passed her henna-tattooed hand over an image of her daughter. Apoorva dissolved and eight grids sprouted onto the digital screen, decorated by colors every bit as vivid as Prabhjit’s sari. Her practiced eye homed in on the scarlet dots. The in-field sensors, sitting among the crops like tiny one-eyed metal scarecrows, alerted her to two patches in the northwest corner in distress. Then she zoomed out to take in satellite data from the entire area. Some farms had already started the harvest. Prabhjit began ruminating about the implications. But the sound of an alarm clock pushed them to the back of her mind. Time to get 15-yearold Apoorva ready for school.

It’s 8 a.m. The house is quiet again after the morning bustle. Prabhjit sits in front of her data screen and calls the foreman, telling him to increase the flow rate in the drippers for fields NW1 and NW2. She arranges to meet him for an onsite visit at 11 a.m.

There’s a knock at her door. It’s the twice-a-month visit from Anil, her “ag-service” provider. She puts on a pot of chai and asks about Anil’s family before they move on to local gossip. Then she steers the conversation to rice. Who’s planting what and what’s his take on the market? Anil confirms that some farmers have started to harvest a bumper crop. But hers needs another week to reach its peak. With so much rice, will she still get a good price in a week’s time? Or should she store it? Prabhjit weighs Anil’s opinions, and decides to silo her harvest and wait for the price to rise.

It’s 10:30 and time to drive to her meeting with the foreman. As she cruises down the road, her memory projects an unbidden image onto the green fields. Shin deep in a muddy paddy, Grandmother and Mother (then just a tiny 12-year-old) are bent over, shuffling backwards. They are in the Punjab, far from home, laborers on a team of women who day after day poke rice seedlings into the mud, heading home weeks later, exhausted.

Another image replaces this one. Grandmother and Mother are transplanting rice again but this time in their own paddy. It is a special crop that will change their future.

Grandmother may not have been able to read words but she could read the winds of change. Grandfather had gone to work in the city years before, leaving her to run the farm. They could not make ends meet on the tiny payment the government broker gave them for their harvest. Yet, the government was urging farmers here to plant more rice because the wells of the Punjab, as everyone knew, were running dry. Although Odisha was usually blessed with ample rain, there could be drought. Or floods. Both had struck the year before.

When Grandmother and Mother transplanted each seedling, they held each one tenderly, as if it were a leaf of gold. Grandmother had been given the seeds at a village meeting. She had been impressed by the educated government woman in her fine blue silk sari who explained that the seeds, developed in the Philippines, were very strong. If the floods came, the seedlings would lie dormant and then burst into growth when the waters lowered. The waterproof seeds went by the nickname of “Scuba rice”!

Their efforts paid off. That first year, floodwaters covered their crop for 2 weeks. But, their crop had not drowned! Unlike many in Odisha, they made a nice profit. Three years later, Grandmother attended another meeting. This time the lady in the fine sari introduced her to two new types of rice—she said they were the daughters of Scuba. But these daughters were smarter than their mother. Super Scuba 1 could survive flood and resist drought. Super Scuba 2 could also extract phosphate from the soil so Grandmother would not have to spend so much on fertilizer. The profit rose steadily each year. She decided that, like Super Scuba 1 and 2, her daughter would be smarter than her. She used the money, not on a dowry, but to send her daughter to an agricultural college—her daughter, the first of her family ever to finish high school, was now being sent to college!

In Prabhjit’s teens, the winds of fortune brought more changes. One was land reform. A new law allowed the formation of small farming corporations, up to 40 hectares. Prabhjit’s father took his two hectares and joined up with Grandmother’s two and they began to rent more blocks. By the time she graduated from college, it was done and Father proudly left the running of the farm to her. She took a microcredit loan to build up the farm to 24 hectares—and took the wheel.

The other revolution was genetically modified (GM) crops. Nitrogen-fixing rice was more miracle than revolution. Like Super Scuba, this was a very, very clever seed. It had taken nearly 50 years to develop in a worldwide project funded by the Bill & Melinda Gates Foundation (BMGF). The rice plants had been genetically engineered to carry the powerful photosynthetic engine of a corn (maize) plant, as well as the nitrogen-fixing genes of a legume, producing yields that were double the size with half the fertilizer.

Vegetable seeds improved, too, but best of all, farmers could throw away the most toxic pesticides because these seeds produced their own, borrowed from a harmless bacterium Bacillus thuringiensis, or BT for short. These vegetables earned the name “Ganesh” after the elephant-headed son of Shiva who was also the god of good fortune. Mother said they could have had Ganesh seeds years before but their release had been delayed. BT cotton had already saved millions of farmers from poisoning and BT pest control spray was so safe, organic farmers who sprayed the bacterium directly on their plants.

Grandmother passed away, aged 57, when Prabhjit was 20. She had withered from backbreaking work and the pesticides—spraying them from two tin cans yoked across her neck, barefoot! She would come back from the spraying, sick with headaches and shakes. In her final years, lying on the cot, she told Prabhjit her story, and the ending was always the same. Even now Prabhjit could clearly hear Grandmother’s voice: “You will be like the rice grains that grow smarter with each generation.”

You might say Prabhjit’s story is a dream. And you’d be right. It is the dream of Robert Zeigler, director general of the International Rice Research Institute (IRRI), and one that he has spent the best part of his working career trying to turn into a reality. Prabhjit’s farming tools are either in the development pipeline or have already emerged.

Scuba, the flood-tolerant rice formally known as Swarna-Sub1, has already been released by IRRI (see Scuba rice). A variety that is both drought and flood tolerant, referred to as “Super Scuba 1” in Prabhjit’s story, is being developed by breeders and is undergoing testing. And, the variety referred to as “Super Scuba 2” that can mine its own phosphate from the soil is due for release in the next few years. It carries a gene called PSTOL1, which stands for phosphorus starvation tolerance. IRRI breeders extracted this gene from a traditional Indian rice variety called Kasalath that performs well in soils with low phosphate. These new rice varieties were developed through a 20-year process of shuffling genes from semiwild or traditional varieties into modern high-yielding ones by conventional breeding.

The next developments will take longer. Engineering rice that is equipped with a corn plant’s photosynthetic engine is a tough task. (Corn has a so-called C4 engine that is about twice as efficient as the photosynthetic engine of rice.) It means retrofitting a whole assembly line of corn genes and redesigning the infrastructure of the rice plant to accept it. (Listen to podcast about C4 rice on IRRI Radio.) BMGF and IRRI provided US$11 million funding for the first 3 years, and, in 2012, the progress was judged promising enough to merit a second round of $14 million. This time, the UK government, the European Union, and CGIAR pitched in.

An equally tough task is to ferry the genes of a legume into a cereal grass like rice, allowing the crop to supply its own nitrogen. This would truly usher in the next Green Revolution, or rather the “Evergreen Revolution.” It could double yields with half the fertilizer. In 2012, BMGF also announced it would provide $9.8 million to the UK’s John Innes Centre to try to entice nitrogen-fixing bacteria, normally attracted only to legumes, into cohabiting with cereal crops.

But what’s the chance of success? “Undoubted,” says Dr. Zeigler. “When I proposed the flood- and drought-tolerant rice project 20 years ago, I was laughed off the stage. The tools we have now for genetically tweaking plants are vastly superior.”

By the time Prabhjit takes the reigns of her father’s farm, GM crops will have been revolutionized agriculture. With overwhelming evidence that GM crops are as safe as conventional breeding (established by the European Commission in 2010 after reviewing 25 years of research from 500 independent research groups), farmers and consumers will reap the benefits. Not only will these crops raise yields, and require fewer pesticides and less fertilizer, they will also deliver life-saving vitamins and micronutrients. According to the World Health Organization, globally, 250 million preschoolers are vitamin A deficient and up to 500,000 go blind. Golden Rice, genetically modified to produce beta carotene, could make a huge dent in this problem. Golden Rice is in the final stages of being tested for its safety and effectiveness.

Prabhjit also relies on the latest in rocket science. The satellite from which she downloads data traces its origin to the European Space Agency Sentinel satellites, the first of which is scheduled for launch in 2013. And, its microwave beams penetrate clouds, meaning they can work throughout the monsoon season. IRRI is also developing the software to allow farmers like Prabhjit to benefit. And it’s not just helpful to farmers. Data like these could help prevent global panic and food price spikes, says Dr. Zeigler. “With time to adjust to a shortage, they can import ahead of time to avoid a panic.”

Prabhjit’s drippers—tiny holes in tubing delivering water and fertilizer at a slow rate—are not rocket science, but literally a “grass-roots” technology developed by the practical Israelis. They more than halve water requirements and increase yields. Israeli inventor Daniel Hillel won the 2012 World Food Prize for developing them. Besides Israel, the fastest adopters have been China and India.

In 2063, Prabhjit’s world is a happy place. The Malthusian spectre that haunted the planet 50 years before—that the population would outgrow its food supply—has failed to materialize. Let’s hope that this dream comes true.

This story is adapted from an original article published in COSMOS magazine. For a nightmare scenario, read a side bar, The dark side, in Ms. Finkel’s full article.