Facts indicate that farmers prefer varieties with high insect and disease resistance. The Institute’s breeding program is now geared to producing varieties in the future that have good grain quality and yielding potential but with greatly increased disease and insect resistance. The Institute is making a strong eﬂort to incorporate insect resistance into the new varieties. These qualities, coupled with good grain quality and high-yielding capacity, will constitute the next major advance in rice technology because they will make it possible for many farmers to grow rice successfully without the use of expensive insecticides and fungicides. 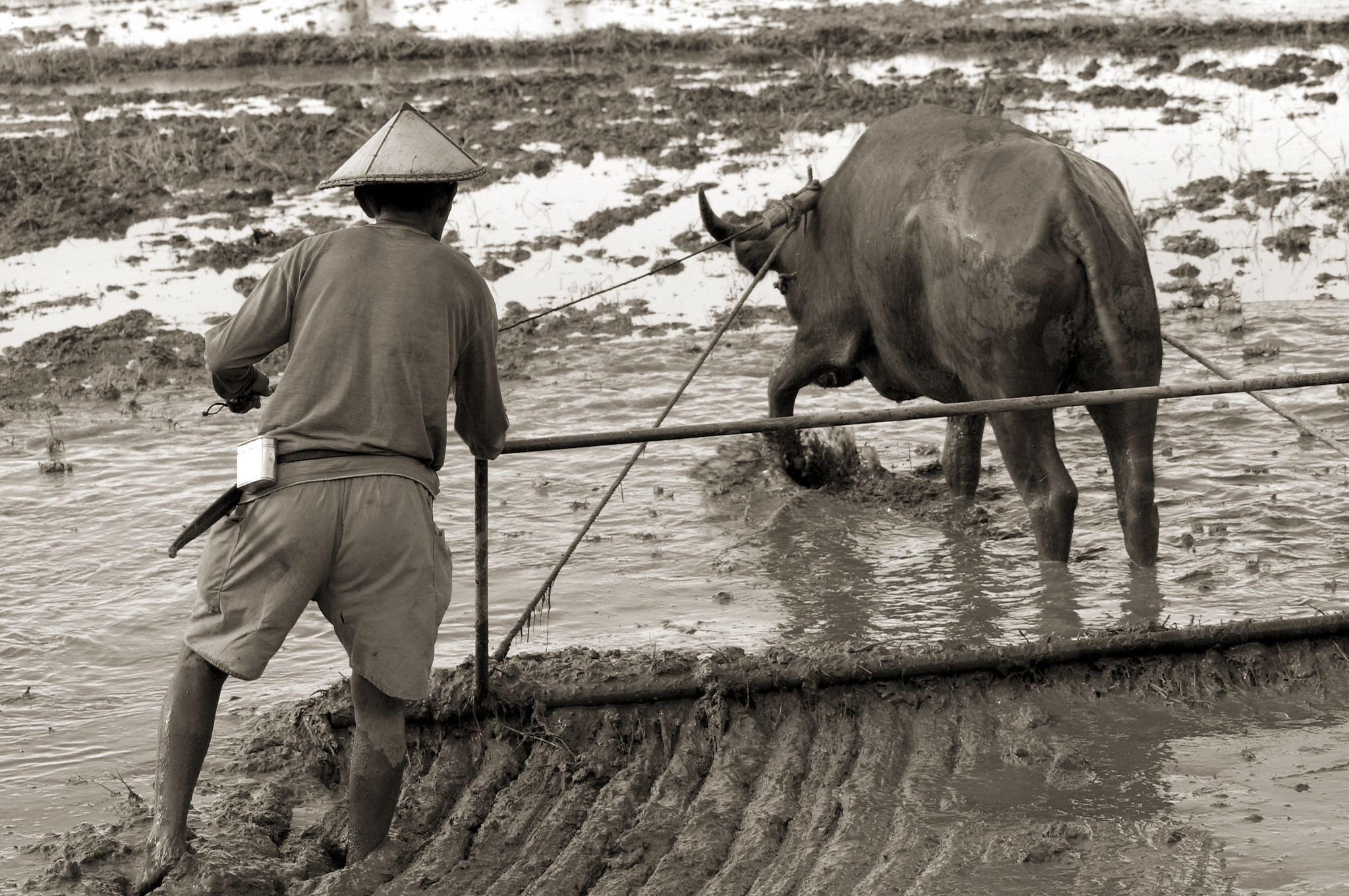 Director’s Introduction
A major event in 1970 was the joining of the United States Agency for International Development (USAID) as a major partner in supporting the Institute. Before 1970 the Institute‘s only regular and substantial ﬁnancial contributors were its founders, the Ford Foundation and The Rockefeller Foundation. In 1970, however, the Institute received USD 750,000 from each of the foundations and also from USAID. The help of the United States Government is welcomed by the Institute not only because of the size of the grant but also because the USAID did all that it could, within the scope of its policies and regulations, to make the grant free of restrictions.

Field research in 1970 was hampered by several severe typhoons and unusually heavy rainfall during the monsoon season. The unfavorable weather reduced yields substantially through the direct effect of winds, rain, and cloudy skies and also as a result of serious outbreaks of the rice blast disease brought on by the humid environment.

The two new rice varieties, IR20 and IR22, named in late 1969, made their impact felt in 1970. In early 1970, because of the success of previous trials of IR20 in East Pakistan, the Government of that Province bought 1,800 metric tons of IR20 seed for planting during the monsoon season. Early reports indicate that essentially all of the seed was used and that the yields were substantially higher than those of the traditional local Varieties.

In the Philippines, the Department of Agriculture and Natural Resources recommended IR20 for nationwide planting and it is now gaining acceptance by farmers faster than any other variety.

The Government of India approved the release of IR20 for planting in West Bengal and Eastern Bihar where a tungro-like virus disease is appearing. In Indonesia and South Vietnam, vigorous efforts are now being made to multiply seeds of IR20 and to distribute it to farmers.

A broad spectrum of disease and insect resistance, good grain quality, and wide adaptability in the tropics seem to be the principal reasons for the acceptance of IR20 by farmers. Furthermore, farmers ﬁnd that IR20 yields somewhat better at lower levels of soil fertility than do several of the other short-strawed, new varieties.

The future of IR22 is yet to be determined. It has the best grain quality and appearance of any Institute variety and it commands top prices on both the Philippine and international markets. It has a high yield potential and strong resistance to bacterial blight disease. Hence, it will compete well with many of the new varieties now being used in India, most of which are rather susceptible to bacterial blight. The high yield potential of IR22 is attested to by the results of a contest in the Philippines to select the outstanding farmers for 1970: among the top five winners in the rice category (based on yield per hectare), four grew IR22 and one grew IR8. 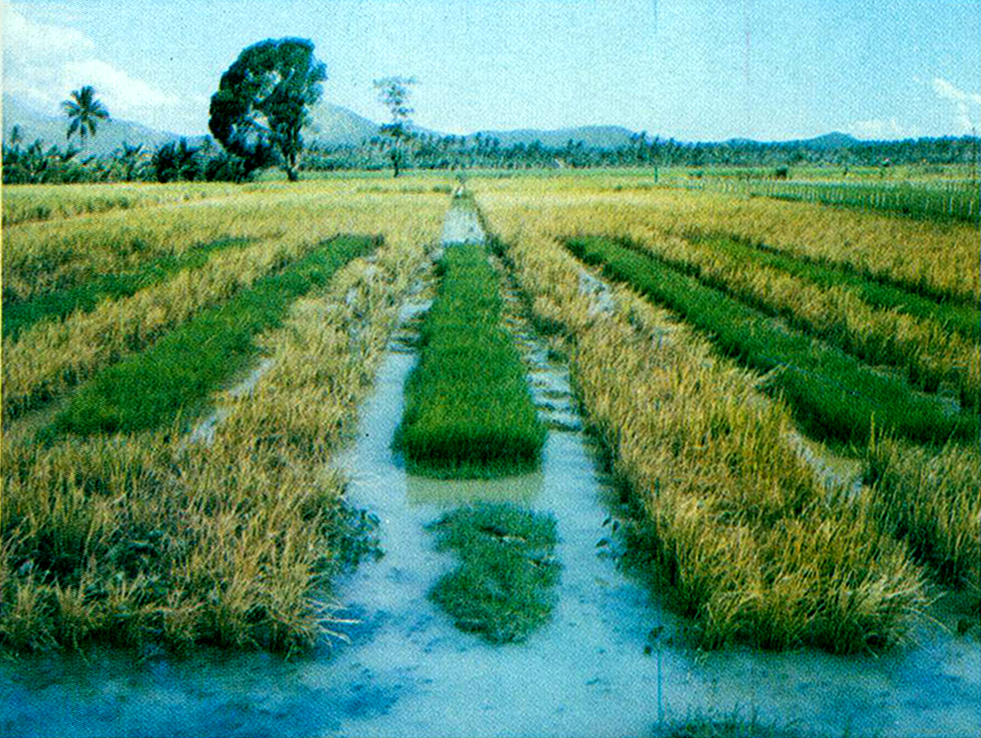 Rice tungro disease is caused by the combination of two viruses, which are transmitted by leafhoppers. It causes leaf discoloration, stunted growth, reduced tiller numbers, and sterile or partly filled grains. (Photo: IRRI)

.
Unfortunately, IR22 is susceptible to the tungro virus disease and to the vector of the disease. Furthermore, it did not inherit the broad-based resistance of one of its parents, Tadukan, to rice blast. However, its high yielding capacity, its excellent plant type, its resistance to bacterial blight, and its superior grain quality will allow it to serve as an important variety until its successor is created.

A genetic line, now designated as IR661-l40-3-2, shows promise of being the next variety the Institute names, It was identiﬁed as being superior in 1968, but because of the need for further puriﬁcation, particularly with respect to grain quality, its evaluation was delayed. Widespread testing in India and the Philippines shows that the line is consistently high yielding. A superior new selection from the IR661 cross (IR8 x [Century Patna 231 x SLO 17]) will be multiplied in 1971 to provide a substantial amount of pure seed for distribution to government agencies and private seed growers

This selection has ﬁne, translucent grain with high milling recovery. It is resistant to the green leafhopper and has some resistance to the brown planthopper, both vectors of important virus diseases. The amylose content of its grain is lower than that of IR8 and IR5, and thus it will have softer texture when cooked. That should make it quite acceptable to Filipinos and Indonesians who seem to prefer softer rice than do the Indians and Pakistanis, for example.

Yield trials conducted for the past 2 years have proved that it can produce from 4 to 9 metric tons per hectare, depending upon weather and management conditions. In nation-wide yield trials in the Philippines in 1969 and 1970, among the ﬁve top-yielding varieties were IR20, IR22, and IR661-1-140-3-2. The IR661 selection was also the winner in a trial of some 64 slender-grained selections in India in the wet season of 1969.

The new, short, stiffed-strawed varieties continue gaining in popularity among farmers. During the months of July, August, and September 1970, 44% of the land area planted to rice in the Philippines was occupied by the high-yielding varieties. In 1969, the corresponding ﬁgure was 34%.

In general, IR5 has proved to be more popular among farmers than IR8, and IR20 is getting acceptance more rapidly than IR22. These facts indicate that farmers prefer varieties with high insect and disease resistance. The Institute’s breeding program is now geared to producing varieties in the future that have the good grain quality and yielding potential of IR20 and IR22, for example, but with greatly increased disease and insect resistance.

The agronomy department continued its intensive studies of chemical weed control for both transplanted and direct-seeded ﬂooded rice and for upland rice which, of course, is always direct-seeded. As reported last year, 2, 4-D continued to be the least expensive effective herbicide for transplanted lowland rice. During 1970, however, two new chemicals came to the fore as highly selective herbicides that can be used on both transplanted and direct~seeded ﬂooded rice. One of these is benthiocarb, which is manufactured in Japan and carries the trade name of Satum. The other is a product of Monsanto Chemical Co. designated originally as CP 53619 and now sold under the trade name of Machete.

Chemical weed control in upland rice is difﬁcult. During the 1970 monsoon season, the most promising chemicals tested were a Japanese product, provided to the Institute under the designation NTN 5006, and Machete, These materials were the most eﬂective when sprayed before the emergence of weeds at the rate of 2 kg/ha of active ingredient, when the rice seedlings were in the one- to two-leaf stage.

The most effective insecticide tested in 1970 proved to be carbofuran (marketed as Furadan). When applied every 3 weeks in granular form at the rate of l to 2 kilograms per hectare it provides good protection against rice stem borers, leaf rollers, green leaf‘ hoppers, and brown planthoppers. The economics of its use is yet to be determined. However, the compound will be marketed commercially in the Philippines in 1971 and soon its proﬁtability can be assessed on farmers‘ ﬁelds.

As mentioned earlier, the Institute is making a strong eﬂort to incorporate insect resistance into the new varieties. This work is being done jointly by the entomology and varietal improvement departments. Genetic lines from several promising crosses are now in the fourth generation and it is possible that selections can be made from these populations that have resistance to bacterial blight disease, to many races of the rice blast disease, to green leafhoppers and to brown planthoppers. These qualities, coupled with good grain quality and high-yielding capacity, will constitute the next major advance in rice technology because they will make it possible for many farmers to grow rice successfully without the use of expensive insecticides and fungicides. 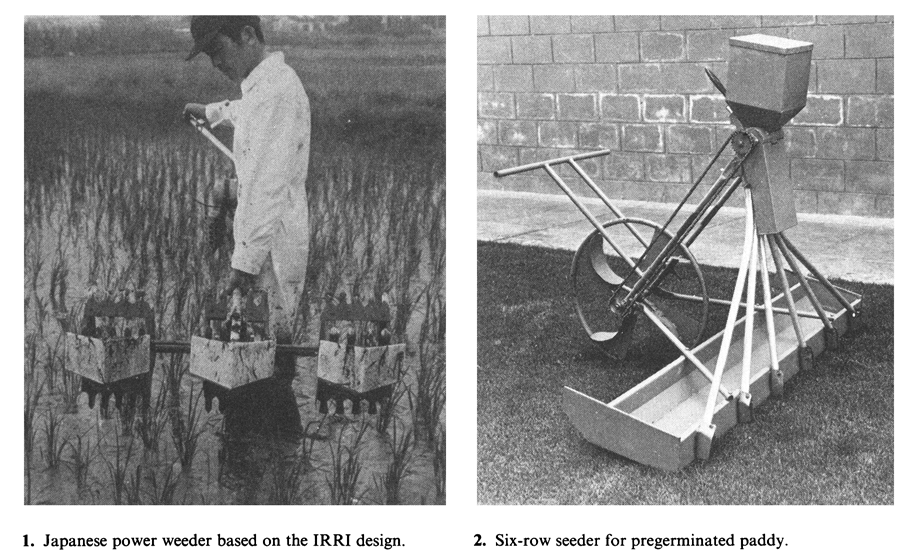 The agricultural engineering department has developed both a six-row and an eight-row seeder which are now being manufactured in the Philippines. These implements are drawn by one man and are designed for direct sowing on the mud surface of the puddled paddy soil. One hectare can be planted in 5 hours, which is about 20 times faster than transplanting. The cost of the machine is equivalent to USD 60.00. The seed cleaner developed last year has been further improved and will soon be manufactured commercially. Work continues on the design and testing of a rapid rice dryer, a ﬁeld harvester, and a high volume thresher.

A major contribution of the soil microbiology department is its ﬁnding that several of the organochlorine insecticides such as DDT, BHC, and heptachlor, are degraded rather rapidly in ﬂooded paddy soils while they are quite persistent in well-aerated upland soils. This indicates that some of these materials can be safely used by lowland rice farmers even though they may leave harmful residues in upland soils.

Studies by the agricultural economics department indicate that mechanization of rice farms in the Philippines has not displaced labor and in some cases has actually intensiﬁed the labor requirement where modern cultural practices and the new varieties have been used.

The Institute‘s training program continued to receive major emphasis. More than 500 persons from over 25 countries have been trained at the Institute in some ﬁeld of rice research, in rice production techniques, or in multiple cropping.

As we visit graduates of the Institute’s training activities in their own countries it becomes evident that they are contributing greatly toward improving the quality of rice research in the developing countries and that those trained in extension methodology are having a real impact in increasing yields on farmers’ ﬁelds.