The success of IR667-98 in Korea is an outstanding achievement. This line has now been named officially by the Koreans and is called Tongil. It has a japonica-type grain but outyields commonly grown Korean varieties by 20 to 30 percent. As is true for all varieties, improvements are needed in Tongil. New crosses have been made to incorporate into this variety such traits as increased cold resistance, earlier maturity, improved resistance to diseases and insects, tougher leaves, slower leaf senescence, and improved grain quality.

The 1971 crop year was marked by heavier than normal rainfall in March and again in November and December. Furthermore, rice in the Philippines suffered the most serious outbreak of the tungro virus disease in history. The combination of rainy weather and disease incidence reduced crop yields on the Institute experimental farm. It provided useful information about varietal resistance to adverse environmental conditions however.

On May 24, 1971, the Institute announced the naming of IR24. This is the ﬁfth variety to be named by the Institute. It is a selection from a cross between IR8 and one of the progenies of the cross [(Century Patna 231 x SLO 17) x Sigadis].

Its previous designation was IR661-1-140-3-117. The advantages of this variety are its resistance to the green leafhopper, which is the vector of the tungro virus; moderate resistance to the tungro disease itself; resistance to bacterial leaf streak; excellent grain shape and appearance; favorable cooking and eating quality; and, of course, good plant type and high yield potential.

In yield trials conducted during the past 2 years in South and Southeast Asian countries, IR24 has usually been among the top three or four varieties. Its defects include susceptibility to some races of the blast disease occurring in the Los Baﬁos area, and to the grassy stunt virus disease and its vector, the brown planthopper. Also, it has moderate susceptibility to bacterial leaf blight, and has been reported to be susceptible to sheath blight in Indonesia.

In fact, genetic lines emerging from the Institute’s breeding program have resistance to several major insects and diseases. By combining the best of these through further crossing, it seems certain that during the next few years varieties will be created that have resistance to most of the important insects and diseases of rice. Many of the crosses have been made, and it only remains to make the selections. The list of insects for which known resistance exists includes the green leafhopper, the brown planthopper, the rice gall midge, and the rice stem borers. Among diseases, sources of resistance exist for tungro and grassy stunt viruses, the rice blast disease, bacterial streak, and bacterial blight. There are several other diseases against which strong resistance may be found, but further work is needed to establish the pest-host relationships.

The resistance factors, of course, are being introduced into the short, stiff-strawed, high-yielding varieties with good grain quality. Once the further-improved varieties have been created, the small and the large farmer alike will beneﬁt from their use because the need for pesticides will be greatly reduced, and, often, entirely eliminated.

The success of IR667-98 in Korea is an outstanding achievement. This line has now been named officially by the Koreans and is called Tongil. It has a japonica-type grain, but outyields commonly grown Korean varieties by 20 to 30 percent. In 1971, 2,700 hectares of this line were grown for seed in Korea.

This area will furnish enough seed to plant one-fourth of Korea’s rice land in 1972, if the country chooses to do so. As is true for all varieties, improvements are needed in Tongil. New crosses have been made to incorporate into this variety such traits as increased cold resistance, earlier maturity, improved resistance to diseases and insects, tougher leaves, slower leaf senescence, and improved grain quality.

Ten genetic lines developed at IRRI, but not named by the Institute, have proved so successful that other countries have released them. This brings to 15 the number of varieties being used in the world that had their origin at IRRI.

At least 15 other short, stiff-strawed varieties have been released that resulted from crosses between varieties or lines developed or distributed by IRRI (including Taichung Native 1 from Taiwan which was introduced into the breeding programs of tropical Asia mostly by IRRI).

Although marked progress is being made in developing insect-resistant varieties, it is still necessary to use chemical insecticides for the control of the major pests of rice. Carbofuran has proved to be an excellent systemic insecticide.

When applied in granular form every 3 weeks, it provides good control of rice stem borers, green leafhoppers, and brown planthoppers, as well as several less important insects. Its cost in the Philippines however, is too high for economic use on the rice crop if more than one application is made at the rate of 2 kg/ha of active ingredient. The entomologists have shown that if rice seeds are soaked in a carbofuran solution, and then the seedlings are dipped
in the solution at a concentration of 1,500 ppm of active ingredient just before transplanting, good protection against both the green leafhoppers and the brown planthoppers is obtained for as much as 60 days. The amount of the chemical needed to treat enough seedlings to plant 1 hectare of ground is 0.25 kg of active ingredient costing P25.00 (about USD4.00).

Another compound made in Japan, called Knockbal, is proving to be as satisfactory as carbofuran as a seedling dip. It is so new that it is not yet on the market. Its mammalian toxicity is lower than that of carbofuran so it will be further tested with the hope that its price will be within the range of small farmers. IRRI scientists now feel that if the seed soaking and seedling dip treatments are administered to resistant varieties, farmers need not fear the tungro virus disease. 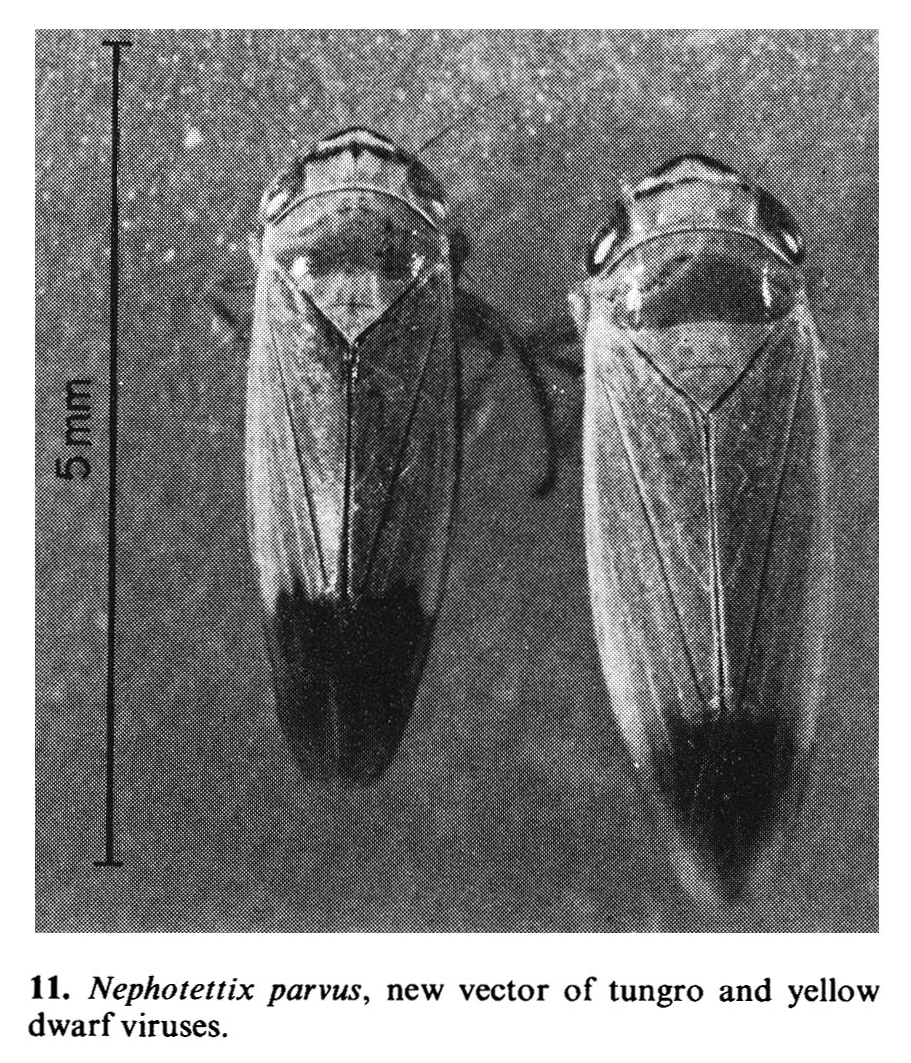 Although the exact cause of the rise and fall in the incidence of the tungro virus disease is not known, it appears to be related to the changes in the population density of its vector, the green leafhopper. Institute entomologists are now attempting to study the population dynamics of this insect in relation to variations in weather and other environmental factors.

A ﬁnding of the soil microbiology department which may prove to have great signiﬁcance is that nitrogen ﬁxation by soil microorganisms is much higher in a soil planted to rice than in the same soil that remains unplanted. It needs to be determined whether air, which is transmitted from the atmosphere to the roots through leaf and stem channels, is supplying needed nitrogen to the nitrogen-ﬁxing bacteria in the rhizosphere or whether root exudates simply provide an energy source for the bacteria and allow them to be more active in nitrogen ﬁxation. Such possibilities are being explored.

The plant pathology department screened thousands of rice varieties and genetic lines in search of broad-spectrum resistance to the many physiologic races of the rice blast disease. Two varieties, Tetep and Carreon, proved to be highly resistant to most of the known races of the disease, and these varieties are now being used extensively in the breeding program to introduce this quality into high-yielding varieties.

The plant physiology department is intensifying its studies of the differences in photosynthetic efficiency of rice varieties under ﬁeld conditions in an effort to determine the impact of this quality on yield potential. Early evidence indicates that it is possible to further increase yields by imparting higher photosynthetic eﬂiciency into the varieties that have improved plant type, but it will take several years to develop appropriate isogenic lines to prove this point. 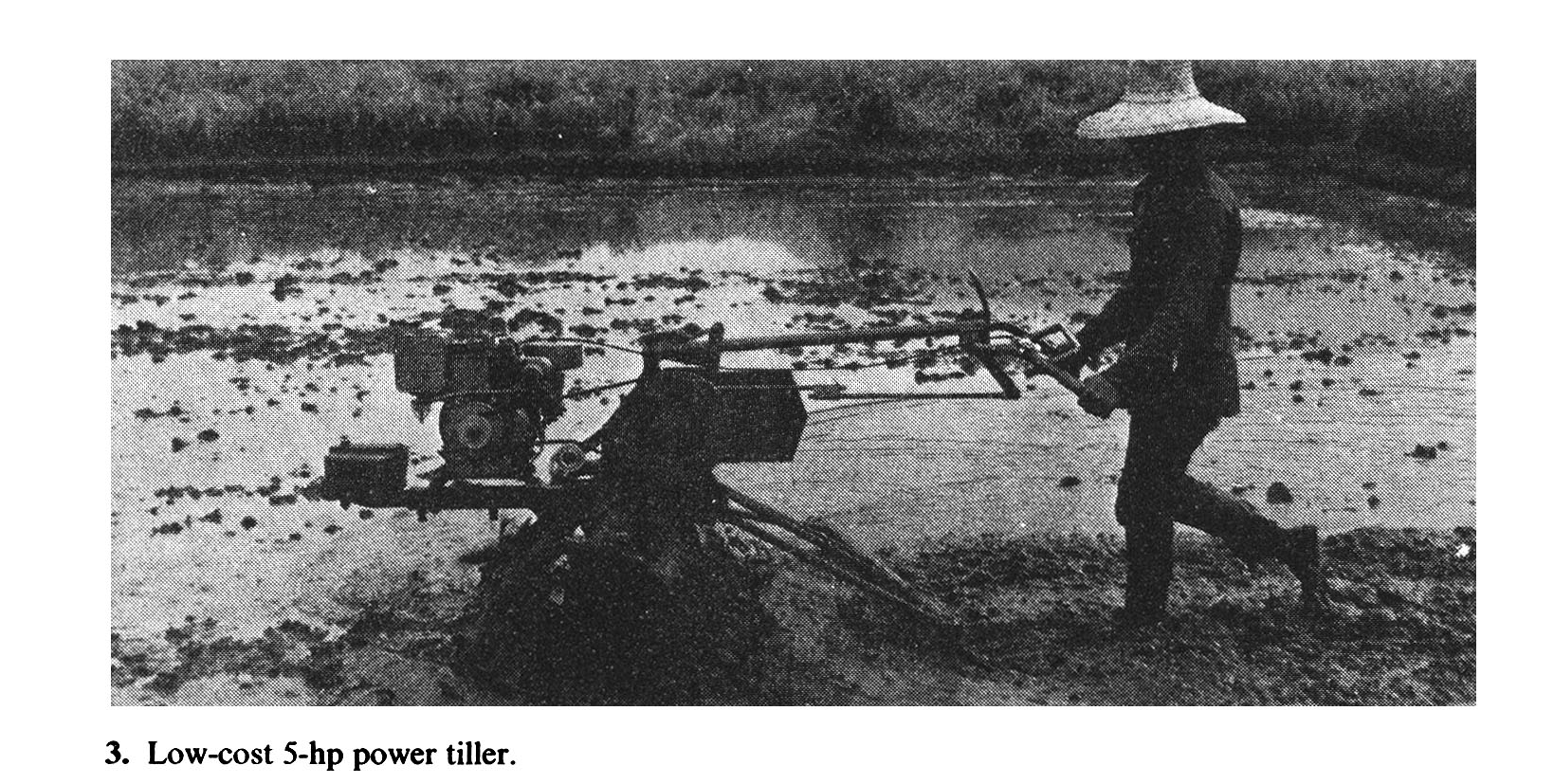 A 4- to 6-hp power tiller, a manually operated low-lift pump, a six-row multi- hopper seeder, and a test-tube rice miller for laboratory use were developed this year. During the year, over 600 single-hopper seeders and 3,000 power weeders, which were originally designed and developed by the department, were commercially produced in Asia.

Local manufacture of the table thresher and grain cleaner was begun and ﬁeld evaluation and extension activities were substantially increased. Work continues on the development of a stripper harvester and a high—capacity, multi-crop thresher. Increased emphasis was placed on the development of rice processing equipment. Work is continuing on the development of the rice hull furnace and new systems for rapid drying and parboiling of paddy.

The agronomy department studied the interaction between water management, nitrogen application, and variety, and, as might be expected, showed that the negative response of the tall, traditional rice varieties to nitrogen was removed when the level of water management was poor. This appeared to be due to the slower absorption of nitrogen by the plant under adverse soil moisture conditions which prevented lodging at high nitrogen levels. The
highest yields were obtained with improved varieties under good management.

The agronomy department also developed a method for measuring evapotranspiration instantaneously and a simple device to supply water to greenhouse pots at predetermined soil moisture tensions. These two developments appear to be signiﬁcant advances in the methodology of studies of relations between soil, plants, and water.

The agricultural economics department continued to obtain input-output data from 152 farms in Laguna province that have been under study since 1966. Although yield levels were depressed by unfavorable weather conditions and increased disease incidence, farmers still preferred the improved varieties.

The intensity of labor use continued to be higher for the high yielding varieties than for the traditional ones.

Yield increases on farmers’ ﬁelds in the Philippines as a result of changing from the traditional to the high-yielding varieties, have not been as great as would be expected from the well-established fact that the yield potential has been doubled. To gain more information on factors limiting grain yield, a project was started this year to study the possibilities for increasing yields under non-irrigated conditions. About 150 ﬁeld experiments were placed on farmers’ ﬁelds in the provinces of Bulacan and Nueva Ecija in the Philippines.

Two kinds of rice culture were involved. One was the so-called rainfed paddy which is bunded and ﬂooded (when enough rainfall occurs), and the other was strictly upland rice culture with no bunding and no ﬂooding. This project, conducted jointly by the Institute and the Philippine Agricultural Productivity Commission under a 3-year grant from The Rockefeller Foundation, involved 22 permanent professional ﬁeld workers and about 100 cooperating farmers. The results of the ﬁrst year show that in the absence of any irrigation system, yields of 4 to 6 t/ha are possible in the monsoon season with relatively simple management systems involving fertilizers, and insect and weed control.

The “country” programs in India, Ceylon, and Indonesia are progressing well. The Pakistan program was slowed down by the political disturbance but will be reactivated in early 1972. A small cooperative program with the USAID got underway in late 1971 in South Vietnam, with the main objective of studying varietal adaptation and cultural practices suitable for Vietnam.