We recognize the increases in rice production that are needed in the next 10 years, and beyond. The challenge is to defend earlier gains as we strive for increased gains. In Asia, where land for the expansion of agriculture is limited, this means intensification-increasing both yield per crop and crops per year. This must be achieved within the context of sustainability-conservation of soil, nutrient, and water resources. 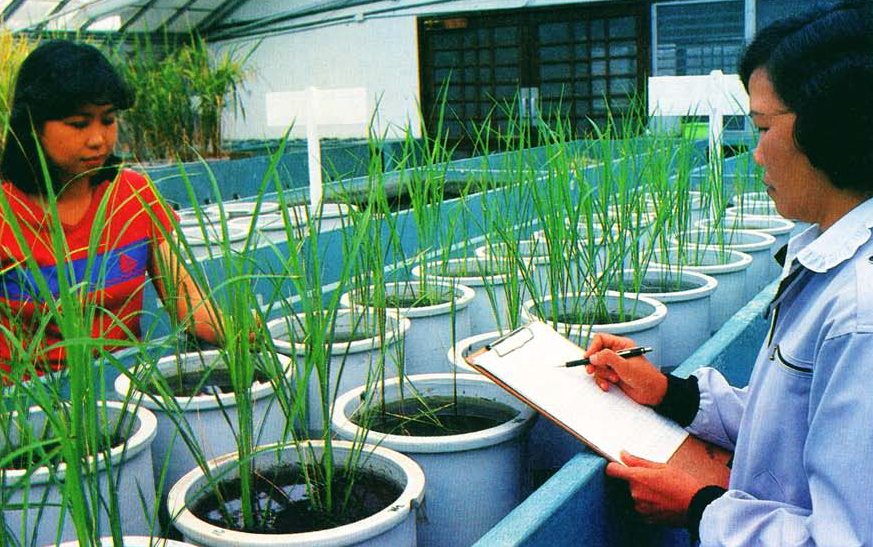 Screening for breeding lines tolerant of problem soil conditions is done in several stages, both in the greenhouse and in the field. (Photo: IRRI)

.
IRRI is acutely aware of its responsibilities in examining the interdependencies, interactions, synergisms, and impacts of all aspects of rice culture. Our work in 1987 built upon the breakthroughs and steady advancements in increasing the production of rice in the many environments in which it is grown around the world.

We recognize the increases in rice production that are needed in the next 10 years, and beyond. The challenge is to defend earlier gains as we strive for increased gains. In Asia, where land for the expansion of agriculture is limited, this means intensification-increasing both yield per crop and crops per year. This must be achieved within the context of sustainability-conservation of soil, nutrient, and water resources.

We realize that achievements in our research must ultimately result in benefits to people—in food to eat, in income to enhance the quality of life, in relief from subsistence drudgery, in opportunities for personal fulfillment by all members of low-income farm families.

Two awards in particular must be highlighted. Two IRRI scientists were awarded the 1987 Japan Prize for their roles in the development of the improved semidwarf varieties that were the breakthrough that dramatically increased rice yield potential. Henry M. Beachell, former IRRI plant breeder, and Gurdev S. Khush, head of the IRRI plant breeding department, shared Japan’s most prestigious scientific recognition.

The Japan Prize was presented 14 April 1987 in the presence of Crown Prince Akihito in Tokyo. The Science and Technology Foundation of Japan initiated the Prize in 1985 to recognize persons who have “served the cause of peace and prosperity for mankind through original and outstanding achievements in science and technology.”

This was the first time the award had been given to agricultural scientists. Director General M.S. Swaminathan was named the recipient of the first General Foods World Food Prize, established by the General Foods Fund, Inc., to recognize, encourage, and reward outstanding individual achievement in improving and increasing the world food supply. The prize was presented on 6 October 1987 in ceremonies at the Smithsonian Institution in Washington, D.C.

The World Food Prize is designed to honor individual contributions to addressing and alleviating hunger and malnutrition. Another purpose is to attract talented, creative, and dedicated young people to careers in the complex and challenging food and agriculture systems.

“The Prize gives recognition to the importance of the production of food and the right of all persons to nutrition security, which includes not only an adequate quantity of food but nutritious food and safe drinking water, so that they may realize their full potential,” Dr. Swaminathan said.

Dr. Swaminathan became Director General of IRRI in 1982 and completed his assignment in January 1988.

The aim of germplasm conservation and evaluation is to provide the building blocks for improved germplasm with higher and more stable yield potential. We are working toward identifying the sources of resistance to diseases and insect pests and of tolerances for a range of adverse growing conditions. In the process, we refine our ability to identify and screen for desirable characteristics and against undesirable traits.

Germplasm fuels every aspect of biological research. One of IRRI’s distinct advantages in breeding improved rices for many different environmental and cultural needs is the unusually rich germplasm collection maintained in the International Rice Germplasm Center (IRGC). Much of the material conserved is already extinct in the wild, no longer grown by farmers, or no longer available in the original donor countries of the tropics.

In 1987, an Asia-wide collaborative collection of wild species was begun. Exploratory missions with national agricultural research programs netted germplasm of nine wild taxa, with field descriptions of the samples and the ecology of the sites where they were found.

This collection is saving populations of wild rices threatened by urban development and destruction of forest areas. One population of Oryza granulata we found in the central plains of Thailand consisted of a single plant with one seed (we collected two tillers and the seed, leaving the plant in its habitat). A population of the rare Oryza ridleyi consisted of two plants with eight seeds.

In addition, the collection missions are pinpointing locations where wild relatives of rice are being conserved alongside other flora and fauna in botanical gardens, forest reserves, and wildlife parks.

The wild species carry an array of genetic resistances and tolerances for many stresses, both biological and ecological. Their distant relationship to domesticated species also provides new insights into rice genetics. Increasing research at the cellular and molecular level has tripled demand for wild species germplasm.

The rice germplasm collection now includes more than 83,000 accessions. A major activity is rejuvenating seed to respond to requests from national programs.

In 1987, we did a large-scale seed increase for the Philippine Rice Research Institute (1,286 varieties) and the Philippine Department of Agriculture (576 varieties). This is an important part of IRGC activity, since many indigenous traditional varieties are no longer grown by farmers and may not be found in national germplasm collections.

We also expanded the computerization of our operations, working toward fully integrated management. This year, we tested an improved procedure for identifying duplicates in the collection, using computer records in conjunction with field evaluation. So far we have matched 134 duplicates among 39,180 accessions.