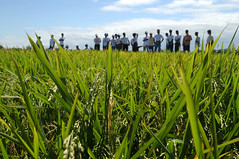 “We are really happy to have so many Filipino farmers visit IRRI and to show them in the field how much better our new varieties, which are now available to Filipino farmers, perform when compared with other varieties,” said Dr. Robert Zeigler, IRRI director general. (See Farmers’ Field Day in PICTURES)

“One new IRRI-bred variety on display that was released in 2010 with the support of PhilRice and the Department of Agriculture (DA) is Tubigan 18 – also called NSIC Rc222 or IRRI 154,” he added.

“In national experimental trials, IRRI 154 (Tubigan 18) yields up to 10 tons per hectare and on average 6 tons per hectare, or 12–13% more than the popular and widely used Philippine rice variety PSB Rc82 – also bred by IRRI and known as IRRI 123,” he concluded.

Tubigan varieties are recommended for irrigated lowland areas. However, national testing shows that Tubigan 18 is also one of the best performers across rainfed areas, especially during the wet season, making it widely suitable for all rice-growing areas in the Philippines.

As part of the farmers’ field day, IRRI is giving seeds of Tubigan 18 along with two other recently released IRRI-bred high-yielding varieties to the attending farmers.

“Fundamental to the success of the Philippines Rice Self-Sufficiency Plan is ensuring that Filipino farmers have access to quality seed,” said Dr. William Padolina, deputy director general for operations at IRRI.

“Quality seed matched with good management is the only way farmers can increase their rice yields,” he added. “IRRI supports PhilRice and the DA to deliver quality seed to farmers by developing high-yielding and locally adapted varieties and assisting them in wide-scale dissemination.”

Other examples of IRRI’s work in the Philippines during the last year follow:

• Conserving local types of rice from North Cotabato in Mindanao with the community through IRRI’s International Rice Genebank and the Consortium for Unfavorable Rice Environments.

• An agreement with GrainPro, Inc. to promote the adoption and dissemination of rice storage technologies in the Philippines to reduce postharvest losses.

This field day follows other field days IRRI has held at its headquarters for Filipino farmers.

IRRI also works across all other major rice-producing countries to help improve rice production and sustainability – working with country-based research and extension partners to advance rice research at the national level.