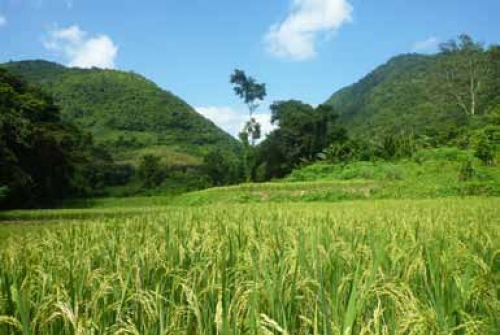 Green Super Rice varieties growing at the National Agriculture and Forestry Research Institute (NAFRI) in Laos are farmer- as well as environment-friendly because they require less use of expensive agrochemical inputs. (Photos: Jauhar Ali)

Fears of food shortages following the rice crisis in 2007 and 2008 have prompted a dramatic shift in global trade and in economic and food security policies. Nations have put more focus now on agriculture—a situation somewhat reminiscent of the events that led to the Green Revolution.

A cornerstone of the Green Revolution was the new varieties of cereal crops developed through the efforts of Norman Borlaug, the father of the Green Revolution ( see A tribute to Norman Borlaug). One of those varieties is IR8 rice, also known as “miracle rice,” developed 40 years ago at the International Rice  Research Institute. When grown with irrigation and nitrogen-rich fertilizers, IR8 produced more grains than traditional varieties. IR8 changed the world food situation according to Tom Hargrove, a former communicator at IRRI. Indeed, the looming famines did not materialize since miracle rice was introduced, as well as other food varieties (see Breeding history).

The high price of a miracle

Modern rice varieties can yield significantly more than traditional rice varieties, but they require more nutrients in order to achieve their maximum yield potential. But, the heavy use of chemical fertilizers can place a toll on the environment. Commercial fertilizer to provide nutrients can be an additional cost to farmers if not used strategically such as through site-specific nutrient management (SSNM).

During the Green Revolution, global use of pesticides rapidly increased to protect crops. But, excessive and indiscriminate pesticide use can adversely affect ecosystems and human health.

Agricultural irrigation, another leg on which the revolution stands, has also come under fire. Many experts believe that the global water supply is dwindling fast. Additional pressure from climate change, population growth, pollution, and higher industrial requirements is also contributing to a possible massive water crisis. (See A dry vision).

Can the world survive without the intensified agricultural practices espoused by the Green Revolution?

Green Super Rice (GSR) for the Resource-Poor of Africa and Asia, a collaborative project between IRRI and the Chinese Academy of Agricultural Sciences (CAAS), offers a sustainable way of producing food for the growing population. Funded by the Bill & Melinda Gates Foundation (BMGF), the project aims to develop rice varieties that retain their stable, sustainable yield potential even when grown with fewer inputs or under unfavorable environmental conditions. 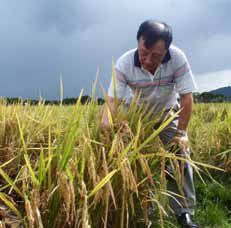 Headed by Zhikang Li, IRRI molecular geneticist who is based at CAAS, the GSR project’s breeding technology radically departs from the original approach of the Green Revolution, in which everything else took a back seat to higher yield.

Because modern varieties have been bred to respond to the best possible field conditions, they do not reach their maximum yield potential when nutrients, pest management, and water are not optimal. For example, IR64, developed at IRRI and released in 1985, became one of the most popular rice varieties in the world due to its high yield. But, this variety is significantly affected by drought. Through the GSR project, plant breeders have developed rice plants that are drought-tolerant but still have the desirable traits of IR64.

After 12 years of rigorous breeding, GSR researchers learned that by subjecting a large number of backcrossed second-generation lines (BC2F2) and their succeeding generations to biotic and abiotic stresses, they could eliminate weak lines and identify promising transgressive segregants, which are lines that exceed the performance range of their parents under extreme conditions.

In the past, breeders at IRRI used only three recurrent parents, IR64, Teqing, and IR68552-55-3-2, a new plant type variety backcrossed with 205 donor parents. However, the GSR concept, which was well received and expanded in China under the China National Rice Molecular Breeding Network, uses 46 recurrent parents. Crosses were made with 500 donors, resulting in a bigger pool of available genes—each of which has also been submitted for complete genome re-sequencing to further strengthen the molecular breeding efforts of the GSR project. Rather than focusing on developing one variety for all, GSR can be custom made to fit any target ecosystem. For example, GSR varieties can grow rapidly to  compete strongly with weeds. Because they establish themselves much faster than the weeds, herbicide—a luxury for poor farmers—becomes unnecessary. These weed-tolerant GSR varieties performed well in field trials in Bangladesh and are now undergoing further testing.

Furthermore, the project has also identified drought-tolerant GSR lines with IR64 as the recurrent parent. For example, IR83142-B-19-B, a GSR line, performs better than Sahbhagi dhan under drought and zero-input (which means no fertilizers and no pesticides, and only one manual weeding) conditions. (See Making rice less thirsty.)

Some 106 GSR varieties are now ready for seed exchange and germplasm distribution through the International Network for the Genetic Evaluation of Rice.  These “finished products” include GSR materials that are drought-tolerant and suitable for rainfed lowlands, and inbreds and hybrids with multiple disease and insect pest resistance. GSR-IRRI also released drought-tolerant, salinity-tolerant, submergence-tolerant, and high-yielding varieties suitable for irrigated conditions.

SSNM provides information based on simple observations that enable rice farmers to tailor nutrient management to specific field conditions and optimally supply rice with essential nutrients at the right time (see Balancing fertilizer use and profit). ICM is a crop production system based on a good understanding of the interactions between biology, environment, and land management. It aims to ensure food production that conserves and even enhances natural resources. 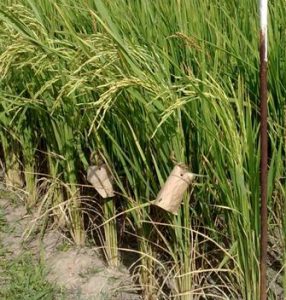 In recent years, rice scientists have been forced to face the additional challenge of balancing food security with preserving natural resources and protecting the environment. For IRRI, the key is a doubly green revolution: the development and diffusion of conventional environment-friendly agricultural practices and innovative varieties such as GSR. (See The Doubly Green Revolution in Rice and The 2nd Green Revolution.)

“I strongly believe that, through GSR technology, it is possible to realize the highly efficient use of germplasm resources while promoting sustainable agricultural development and protecting the environment for future generations,” Dr. Li said.

Jules Pretty, professor and pro-vice-chancellor of environment and society at the University of Essex in Colchester, England, as well as author of several books on agricultural sustainability, agrees. Productive and sustainable agricultural  make the best of crop varieties and their agroecological and agronomic management, he said. “This new initiative from IRRI on GSR is welcome as it fits these conditions and needs.”