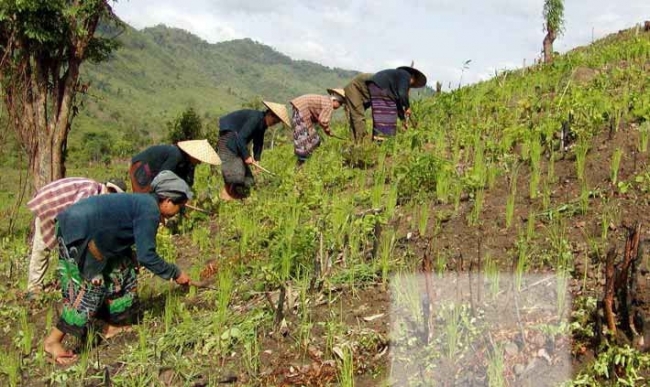 Farmers in Laos weed upland rice, an activity that absorbs up to half of the crop’s labor demand. (Photo: Bruce Linquist)

Phath Kantannam and her husband, Mai Khong, started their garden a little more than two years ago. It has since matured into a roadside slice of Eden amid the hardscrabble hills that crowd the Ou River north of Luang Prabang. The garden’s mango, lichee, lemon and star apple trees do not yet bear fruit, but among the annual and intermediate cash crops already earning the couple a modest income are chili, eggplant, banana and pineapple. Hedgerows of leucaena and stylo legumes planted to control erosion on this single hectare of sloping land also provide fodder for pigs. A few small stream-fed ponds at the bottom of the vale nurture fish that the couple share with their children and grandchildren. Phath and Mai Khong recently started marketing saplings from their fruit-tree nursery and experimentally raising frogs to sell as food.

Unlike biblical Eden, this garden is no paradise of innocent leisure. Phath and Mai Khong devote long hours of hard labor to tending and expanding it. They are lucky to have the time, and they owe their good fortune to another hectare of land, inherited from Phath’s mother, on the other side of the river.

That plot consists of several bunded (embanked) rain-fed paddies that reliably produce the 2.5 tons of rice that the family of six consumes each year. Unlike most of their neighbors, the couple need not resort to growing upland rice (a dryland crop like wheat) on hillsides cleared by slash-and-burn.

Their rice needs readily secured, they devote their spare time and energy – and their upland garden – to improving their livelihood.

“We hardly ever have to weed the lowland rice,” says Mai Khong, citing the most time-consuming chore in upland rice production. “We use that time to work in the garden.” The couple’s story illustrates the happy corollary to a maxim of life in the Lao highlands: “Without  rice, you can’t do anything.” Because they have rice, they can pursue a wealth of options. And what is good for the family is good for the nation. Now that Laos grows about as much rice as it needs at the national level, it can devote more resources to tackling persistent regional rice deficits, especially in the north, and to addressing the other economic, environmental and social challenges that face its 5.3 million people.

“Laos was never in modern history self-sufficient in rice until 1999,” says Karl Goeppert, IRRI representative to the Lao People’s Democratic Republic and head of the Lao-IRRI Project. “Rice prices for consumers have since come down and are now similar to prices in neighboring countries.”

The Lao-IRRI Project is a collaboration teaming IRRI with the Lao National Agricultural and Forestry Research Institute. Since the project’s launch in 1991, the Swiss Agency for Development and Cooperation has faithfully supported it with a commitment so far totaling US$14.5 million.

In the same period, the Lao rice harvest has grown by more than half. Almost all of that gain has been in the lowlands, where adoption of modern, high-yielding varieties has ballooned from 5% to more than 80%.

“One of the most striking features of rice production in Laos during the second half of the 1990s was the rapid expansion of the irrigated area,” comments Kouang Douangsila, head of the National Rice Research Program and Lao-IRRI project coordinathe tor. Since 1995, the irrigated area has grown by eightfold to 100,000 ha, now accounting for almost a fifth of total lowland rice area. Irrigated dry-season fields, all of which are planted to modern varieties, have strongly contributed to the growing harvest.