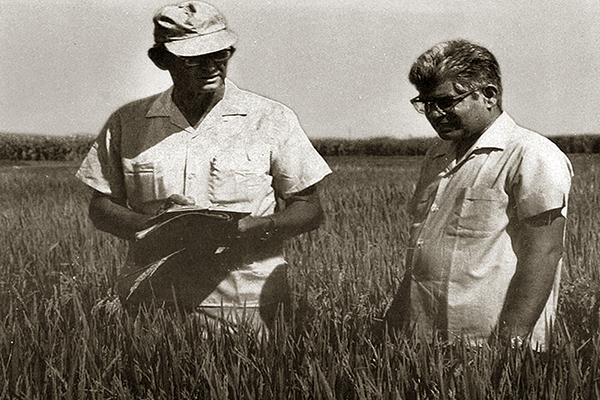 In December 2014, I noted that 2015 would mark the 50th anniversary of India’s Directorate of Rice Research (DRR) and the Annual Rice Group Meeting of its All India Coordinated Rice Improvement Project (AICRIP). So, at that time, J.K. Ladha, the International Rice Research Institute’s (IRRI) representative in India, and I encouraged a cadre of renowned Indian rice scientists and administrators to provide some brief recollections and testimonials, particularly espousing the exceptional partnership between India and IRRI. We also asked a long-time DRR breeder to provide her unique look at AICRIP’s legacy. Responses were heartening, enthusiastic—and enlightening. In addition to historical perspectives, topics ranged from achievements in hybrid rice and building India’s scientific capacity to addressing climate change. What follows here are some selected gleanings. Read the complete set of contributions here.

A time to celebrate, pause, and reflect 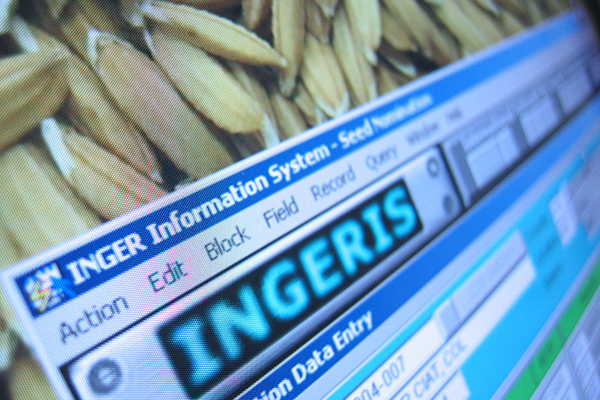 INGER IS celebrating its own 40th anniversary in 2015. (Photo: IRRI)

In her detailed account of Five decades of AICRIP, N. Shoba Rani writes about the program’s growth and contributions to the rice revolution in India. The acting director of the DRR/AICRIP for a time in 2014, she states that the Golden Jubilee of AICRIP, which received directorate status as the DRR in 19751, is a time to celebrate success and a time to pause and reflect on the way forward and to face new challenges. “It is also a time to hear the heartbeat of the rice farmers,” she adds.

According to Dr. Rani, the Indian Council of Agricultural Research (ICAR) located AICRIP in Hyderabad in 1965 with a mandate at the time to develop an integrated national network of cooperative experimentation on all aspects of rice production. “Accelerating breeding with the new semidwarf varieties arriving on the scene would be a key effort,” she says.

The Rockefeller Foundation, the U.S. Agency for International Development (USAID), and IRRI were soon associated with the project to enhance the pace of rice research in the country.

According to S.K. De Datta, one of IRRI’s first agronomists, serving there from 1964 to 1991, IRRI’s collaborative research with India was formally launched shortly after AICRIP’s establishment. “ICAR appointed S.V.S. Shastry, a distinguished breeder and geneticist, as its coordinator and project leader while the Rockefeller Foundation designated Wayne Freeman as the joint coordinator,” says Dr. De Datta. “Dr. Freeman also later served with distinction as IRRI’s first representative in India.”

As AICRIP’s first manager, Dr. Shastry, who also served on IRRI’s Board of Trustees in the early days (1970-73), saw his priority being project implementation and not so much bureaucratic things such as memoranda of understanding and streamlining administration. “The focus was on the semidwarf cultivars, which covered the entire research area of the AICRIP center in Hyderabad,” he says.

“The bread and butter of crop improvement is genetic enhancement and crop husbandry,” he adds. “The genotypes must be matched with the biological and physical environment in which the crop is grown. IRRI and AICRIP met this challenge guided by the competence and vision of the scientists at both institutions.”

The key to success: germplasm exchange 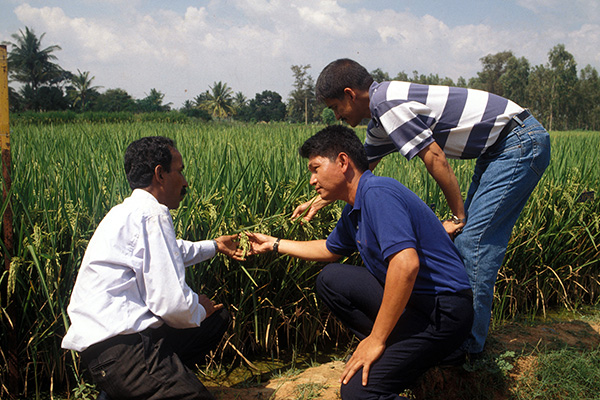 SINCE 1989 when ICAR implemented a national program on hybrid rice development, IRRI researchers have contributed much to improving this technology, which can greatly increase India’s rice production and farmers’ income. (Photo: Gene Hettel, IRRI)

According to the DRR’s current director, V. Ravindra Babu, AICRIP’s varietal improvement has involved the pooling of breeding material generated in more than 100 regional rice-breeding stations across India. “This has allowed for testing under different rice ecologies and agroclimatic zones,” he says. “The greatest advantage has been the free exchange of genetic material at both the national and international levels through IRRI’s International Network for Genetic Evaluation of Rice or INGER.”

“India has benefited from its partnership with INGER by directly releasing 70 entries from diverse sources to date as varieties,” says D.V. Seshu, former IRRI plant breeder (1976-93) and an early INGER coordinator. “The use of several hundred test entries as parents in various breeding programs led to the release of an additional 252 varieties in 24 Indian states. INGER entries were also used directly as either restorer or CMS2 lines that led to the release of around 40 hybrids in India.”

Speaking of hybrid rice, the India- IRRI collaboration is a unique example of how to develop such a technology from scratch, according to Sant Virmani, IRRI plant breeder (1979-2005) and former leader of IRRI’s Hybrid Rice Program.

“We encouraged India’s private sector to develop and disseminate hybrid rice technology by freely sharing IRRI-developed hybrid materials and seed production technology with them,” says Dr. Virmani. “This concerted effort resulted in the development and commercialization of hybrid rice by 1994. In recognition of this development, India, in collaboration with IRRI, hosted the 3rd International Symposium on Hybrid Rice in 1996.

“IRRI has supported the hybrid program in India by continuously sharing breeding materials and seed production technology and providing regular consulting services through visits by Institute breeders,” adds Dr. Virmani. “Concurrently, IRRI has enhanced the capacity of Indian scientists and seed production personnel with postdoctoral, on-thejob, and short- and medium-term training in the Philippines as well as in India.” 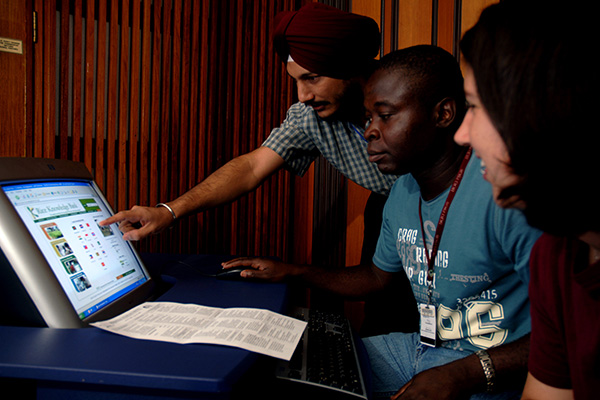 Others in the cadre also mentioned the critical importance of capacity building. Professional advancement for Indian scientists has been key, not only in hybrid rice development, but in many aspects of rice research.

According to Mano Pathak, former IRRI director of research and training (1974-89), the Institute’s training programs were initiated to provide MS, PhD, and postdoctoral research programs. “Additionally,” he says, “short-term nondegree programs on rice production, pest and soil management, and postharvest technology have been an important feature of the Institute’s intensive training courses, some up to 6 months in duration.”

Since 1965, Indian scholars who have trained and done research at IRRI tally around 110 PhDs, 15 MSs, 135 interns, and 15 research fellows. “Many Indian scientists, who are part of the IRRI alumni network, now occupy key leadership positions in ICAR and the university system and are significantly contributing to the country’s rice crop production and use,” points out Dr. Pathak.

Pradeep Sharma, vice chancellor of Sher-e-Kashmir University of Agricultural Sciences and Technology of Jammu, adds management of soil and water to the list that IRRI supports for capacity building in India. “These two natural resources are threatened by overexploitation and misuse as well as by climate change,” he warns.

Many in the cadre obviously had this issue on their minds—and with good reason. “Global climate change—characterized by increasing temperatures, more variable rainfall, sea-level rise, and melting glaciers—is projected to significantly impact rice production in India and neighboring countries, and affect the food and livelihood security of millions,” says Pramod Aggarwal, regional program leader for South Asia of the CGIAR Research Program on Climate Change, Agriculture, and Food Security (CCAFS).

According to Dr. Aggarwal, India and IRRI share a long research collaboration to study the relationship between rice and the climate. “For example, IRRI and ICAR scientists worked together to set up automatic methane gas measuring facilities, which were instrumental in producing revised estimations of methane gas emissions, leading to a downward evaluation of emissions from the agricultural sector.”

He points out that now IRRI and the International Maize and Wheat Improvement Center (CIMMYT) are working with CCAFS on obtaining greenhouse gas estimates under different management practices in farmers’ fields in several “climate-smart villages” in India and South Asia. “These studies will lead to the development of more robust measurement, reporting, and verification systems for methane gas emissions in rice paddies,” says Dr. Aggarwal.

Farmers in the climate-smart villages in eastern India have been given access to drought- and flood-tolerant rice varieties, such as Sahbhagi dhan and Swarna-Sub1, respectively, among many other adaptive practices. “Water-saving and low-emission practices such as alternate wetting and drying and direct-seeded rice are an integral part of the climate-smart portfolio in these villages,” he adds.

In Asia, IRRI has interacted closely with the Asia Pacific Association of Agricultural Research Institutes (APAARI) since its inception in 1990. APAARI and IRRI have had a long partnership in promoting and initiating rice research for development activities in India and South Asia, according to Raj Paroda, former APAARI executive secretary (1992-2014), ICAR director general (1994-2001), and IRRI Board of trustees member (1990-93). “For example,” says Dr. Paroda, “APAARI, on the advice of IRRI, published the book Hybrid rice in China, which helped promote hybrid rice research in India.”

Dr. Paroda added that APAARI helped facilitate the germplasm exchange activities of INGER in India, worked with IRRI and CIMMYT to initiate the Rice-Wheat Consortium for the Indo-Gangetic Plains in 1994, and enthusiastically endorsed the CGIAR’s Global Rice Science Partnership (GRiSP) in 2010.

Impact of the Green Revolution 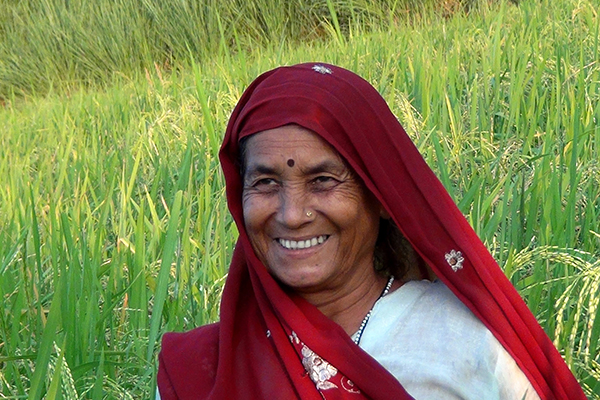 All of the products and activities of the ongoing Green Revolution have had remarkable impact in India. “During the 1960s, the country imported up to 10 million tons of food grains annually,” says Gurdev Khush, 1996 World Food Prize laureate and IRRI rice breeder and principal scientist (1967-2001). “For the last 10 years, India has exported 4−6 million tons of food grains every year,” he says. “The quantity of rice exported in 2013-14 was 10.7 million tons—more than any other country. Considering that the population of India has increased from 350 million in 1960 to the current 1.254 billion, this is a remarkable achievement.”

DRR director Babu agrees. “IRRI has been a key R&D partner of the DRR for the last 50 years—and the rewards have been mutual,” he says. “I am sure that, through continued collaboration between the two organizations as equal partners, we will be able to meet India’s future challenges to rice production and productivity.”

Mr. Hettel is editor-in-chief of Rice Today and IRRI historian.