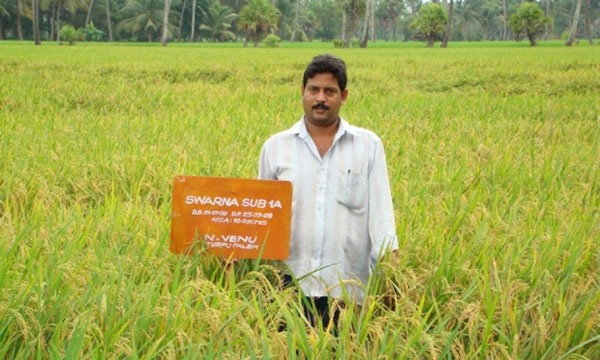 SWARNA SUB1, a submergence-tolerant variety, has been adopted by many farmers in countries such as India and Bangladesh. (Photo: STRASA-India)

By serendipity, the scientific work by the International Rice Research Institute (IRRI) is building bridges across difficult political borders to help achieve shared goals in food security and poverty alleviation.

Over the past year, the Stress-Tolerant Rice for Africa and South Asia (STRASA) project has catalyzed a series of discussions that have brought together officials of Bangladesh and India, at both high and working levels, to discuss ways to share rice germplasm and improved production technology for mutual benefit.

The STRASA project works closely with the agricultural and rice research centers of South Asia and Africa to further deepen and then disseminate, in as participatory a manner as possible, the results of scientific research spearheaded by the IRRI.

Research under STRASA responds specifically to the needs of rice farmers and consumers in areas unfavored by nature for rice production. Rice farmers in unfavorable areas have to contend with unirrigated or rainfed farms, poor and saline soils, drought, flood, and heat. Because of these major constraints, most of these farmers have been left behind in the development process. Moreover, the STRASA project anticipates the worsening of challenges that rice producers in unfavorable areas face as the devastating effects of climate change unfold.

In February 2013, a large delegation representing the full seed bureaucracy of India traveled to Dhaka. The Indian delegation was headed by H.E. Shri Ashish Bahunuga, secretary of agriculture and international cooperation of the Ministry of Agriculture, India. The group also included senior officials from key offices concerned with seed production, distribution, and certification in India. These were the Indian Council for Agricultural Research (ICAR), represented by Deputy Director General for Crop Science Dr. Swapan Datta, and the seed departments of several Indian state governments.

The Bangladeshi government welcomed the Indian visitors with excitement and with open minds and hearts. H.E. Matia Chowdhury, minister of agriculture, personally headed the Bangladeshi delegation, which included counterparts from all the relevant agencies of the government of Bangladesh, especially H.E. Monzur Hossain, secretary of agriculture.

The Indian and Bangladeshi delegations met in early February 2013 in Dhaka at a workshop organized under STRASA, led by Drs. Abdelbagi Ismail and Umesh Singh of IRRI. The workshop was cordial yet intensive, laying out the concerns that the two nations faced in sharing technology for mutual benefit.

The following challenges that the officials from both Bangladesh and India face are complex yet crucial for shared progress in rice productivity for the neighboring countries:

I was fortunate to participate in the STRASA workshop on seeds in Dhaka. Engaging with the delegations from India and Bangladesh, I could not help but conclude that this process, while focused on seeds, is historic and is helping both countries in unexpected ways.

India and Bangladesh share a great deal of history. Bangladesh was part of India before the great partition that created East and West Pakistan in 1947. Bangladesh became a sovereign nation in 1971. But, through all that, the borders—first, administrative, and later, international—between India and Bangladesh have remained fuzzy and porous, with the two countries separate yet bound together by commonalities in heritage, blood, culture, religion, and agroecological conditions.

Indeed, if we go back in time much further into prehistory, recent advances in DNA analysis tell us that the origin of the rice plant is in the area now known as China, while we find the origins of humans in Africa. Through eons of evolution and migration, rice spread from China into South Asia and Southeast Asia. And, humans journeyed out of Africa to inhabit all but the most remote and inhospitable corners of the world.

Through many centuries of adaptation to a wide range of environments, many varieties of rice came into being. Similarly, humans evolved into different races, with divergent cultures, including diets and food preferences. Thus, beginning with a few strains of rice emerging from a specific area of the globe, now there are at least 120,000 varieties of rice.

Today, humankind, with IRRI in the lead, is extracting, nurturing, and creating new varieties that carry within them those traits that will enable rice to thrive even in the most inhospitable of agroclimatic environments. This, in essence, is the mission of the STRASA project.

The discussions among the Indian and Bangladeshi officials responsible for seeds, informed and facilitated by IRRI, are accomplishing far more than just ”harmonizing” seed-related procedures and regulations in India and Bangladesh. Perhaps more important and long-lasting is the mutual familiarity, friendship, trust, and confidence being built among these senior officials from opposite sides of a political border.

Serendipitously, the seed-focused discussions were taking place as the highest political leaders of Bangladesh and India were taking forthright steps toward improved relations and cooperation. In 2012, the minister of agriculture of Dhaka visited New Delhi to strengthen ties with her Indian counterpart. And, on the same day as the agricultural officials were meeting, the external affairs minister of India was also in Dhaka to promote discussions on the sharing of water between India and Bangladesh, and the clarification of the land border between the two nations.

There is great optimism that the germplasm-sharing workshops facilitated by STRASA will be successful. Indeed, the level and quality of participation in the Dhaka workshop were appropriate for substantive discussion and progress—just below the ceremonial and just above implementation—and therefore a focus on decision-making and successful rice diplomacy.