Tanzania is poised to meet the growing demand for rice in Eastern and Southern Africa. It can potentially double or even triple its production through a strategy that combines improving agronomic practices, delivering improved high-yielding rice varieties, capacity strengthening in research and outreach, and a good strategy for seed production and distribution. 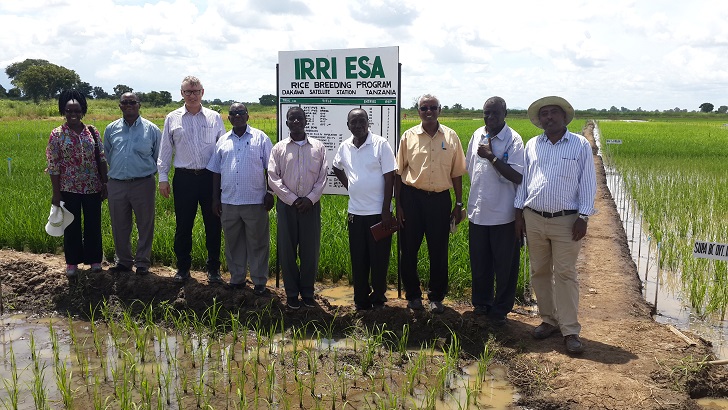 “Tanzania is set to become the next rice granary in Africa,” said Abdelbagi Ismail, principal scientist at the International Rice Research Institute (IRRI). “It has great potential to expand as it has advantages of having ample suitable lands and water resources, and a good climate.”

The names of the varieties seem to represent how the Tanzanian government views its future rice sector. Komboka means “to be liberated” and is telling of the government’s desire to be free from the problem of low rice production. Tai, which means “eagle,” seems to speak of the country’s desire to take its rice production to greater heights in both quantity and quality and be the leading rice exporter in Africa and even in the Middle East. 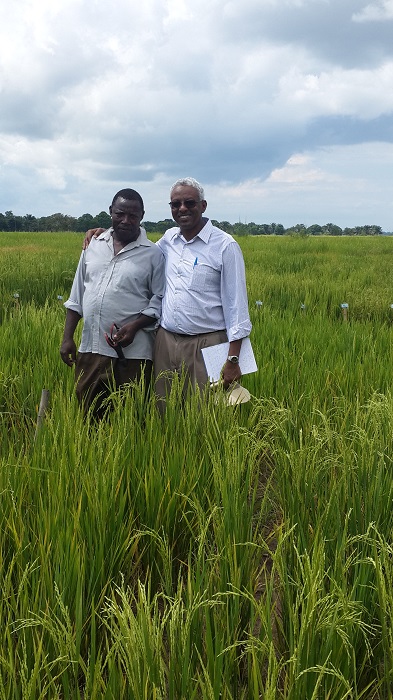 Komboka and Tai can be grown twice a year—during the rainy season from January to June and during the dry season from August to December. Farmers can cash in on their crop early because both varieties mature faster, 5–14 days compared with Saro 5, a local variety. Also, the two varieties have moderate resistance to diseases such as bacterial leaf blight and leaf blast.

Tanzanian farmers are pleased with the superior performance of Komboka and Tai. A rice farmer-cooperator, Israel Mwakyange in Kyela, said that he had replaced his local variety with Komboka. What’s more, he readily agreed to let IRRI use part of his land for research and demonstration purposes.

A focus on quality
Rice is both a cash crop and food crop in Tanzania so farmers are very critical when it comes to quality. The two high-yielding varieties meet the grain quality demand of the market. Aroma is a big factor in the marketability of Komboka. On the other hand, Tai caters to consumers who consider aroma less important.

“The two varieties are in demand for their long, slender, translucent grains, and the soft texture of the cooked grains, which remain soft even when stored overnight,” explained Zakarias Kanyeka, IRRI rice breeder, who actively participated in the evaluation and selection of the two IRRI varieties from 2008 until their release in 2013.

“Marketing of these new varieties is demand-driven and price-sensitive, and is influenced by millers and traders,” said Fermin Mizambwa, the chief executive officer of the Agriculture Seed Agency (ASA). ASA, through a joint demonstration with farmers, millers, and traders to identify preferred varieties, learned that yield, aroma, and grain quality are key attributes for the marketability of a variety. This demonstration resulted in millers and traders selecting TXD 306 (Saro 5) for production and branding. “In fact, a miller has a contract with 1,000 rice farmers to produce Saro 5,” added Dr. Mizambwa. “Based on our experience, Komboka has all the necessary attributes over Saro 5 for such a business model.” 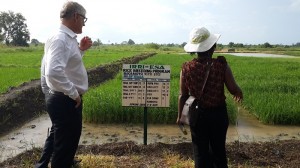 Beyond improved varieties
“In addition to improved varieties, capacity building is a key area for IRRI to contribute,” said Mr. Nkori Kibanda, coordinator for the National Rice Research Program-KATRIN. IRRI has provided, on the ground, a scientist with expertise in agronomy and seed systems and a local liaison. To make sure that the potential of the new varieties is fully exploited, IRRI is working closely with the Regional Rice Centre of Excellence (RRCoE) and other local institutions for the development of improved agronomic management practices and good seed systems for high-quality seed production and delivery to farmers. Moreover, Dr. Rosemary Murori, IRRI rice breeder stationed in Kenya, is overseeing the breeding activities.

“We are also looking to support mechanization in Tanzania,” said Joseph Bigirimana, IRRI coordinator in Eastern and Southern Africa.

In Tanzania, crop establishment is mostly through direct seed broadcasting, with some transplanting. Farmers usually experience serious weed problems, which are exacerbated by deficiencies in land preparation and bunding.

“A substantial percentage of the time, investment in rice production in Tanzania was used for weed control,” said Mr. Kibanda. “Another aspect that needs attention is farm equipment maintenance because skills are insufficient in this area.”

He also pointed out a need for local credit to support purchase and maintenance. “Mechanization will solve problems of labor shortage for land preparation, weeding, and harvesting,” he added. “Losses incurred during harvest and postharvest activities will also decrease.”

A stronger partnership
“The good relationship between the government of Tanzania and IRRI has been an enabling factor in ongoing research activities in the country,” said Dr. Kanyeka. “The two new varieties came into being through the synergistic team effort between IRRI scientists based in Tanzania and the country’s National Rice Research Program coordinated at the Agricultural Research Institute-KATRIN.”

Dr. Bigirimana concurred. “The development of Komboka and Tai would have never been possible without the significant support from our partners in Tanzania,” he said.

IRRI’s research sites, at Dakawa in Morogoro and, in the near future, in Kyela for the Southern Highlands and at Ukirigiru for Lake Victoria Zone, will help in the wide-scale diffusion of these new varieties. Within 2015, two more varieties are likely to be released in Tanzania.

The relationship between Tanzania and IRRI is on the right track because “IRRI’s activities are all aligned with the national strategy of the country,” said Dr. Bigirimana.

For Dr. Ismail, the initial success of the rice sector in Tanzania will be a model for other countries in Eastern and Southern Africa. “As of now, we are focusing our limited resources on Tanzania, Mozambique, and Burundi, and then we’ll expand to other countries such as Uganda, Malawi, Kenya, and Madagascar.”

“I believe that these aspirations can be a reality,” said Dr. Bigirimana. “We have a clear vision for our strategy in Africa, that is, to improve rice production and contribute to improved livelihoods and growth of the rice sector in sub-Saharan Africa through high-yielding, locally adapted varieties as well as efficient sustainable management practices.

“This we will do in joint efforts with the Africa Rice Center, our national partners, and other regional initiatives,” Dr. Bigirimana added. “But, of course, we should always ensure that deliverables are market-oriented, socially and gender-sensitive, and environment-friendly.”