When David Leprozo, Jr. took up photography as a hobby at 13, he never thought it would lead him to a career of preserving the culture of the Philippine Cordilleras through his photos. Now in his early 50s, Mr. Leprozo has become an emissary of the geographic region, where he was born and raised, showcasing its traditions around the world. 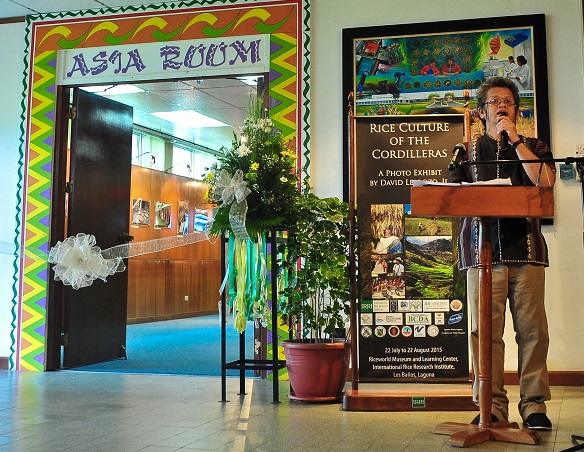 “It started as a hobby,” Mr. Leprozo recounted his love affair with photography a few hours before the opening of the Rice Culture of the Cordilleras exhibit at the Riceworld Museum at the International Rice Research Institute (IRRI). “Eventually, I saw the importance of preserving images through photography and conveying these messages to the world.” 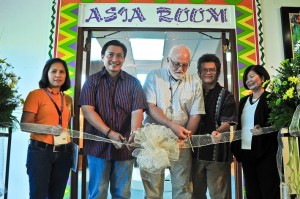 The portfolio, which Mr. Leprozo donated to IRRI, was part of a series of international exhibits, most recently in Vienna, Austria where it was warmly received by Europeans. “Philippine culture is unique, especially in the Cordilleras. The region has some 47 vernaculars, no political boundaries, yet the tribes differ in color and customs and their lives revolve around rice,” said Mr. Leprozo.

The rice culture of the Cordilleras is often equated with the regal rice terraces, particularly those in Ifugao province, which was included in the UNESCO World Heritage List in 1995. In fact, the culture is composed of the terraces, rice farmers, traditional farming methods, and the local heirloom rice varieties. These elements are so closely intertwined that removing one would cause the system to unravel. At one point, the rice terraces were almost taken off the World Heritage List due to the alarming state of disrepair triggered by the migration of farmers seeking more lucrative livelihood elsewhere. In their absence, their abandoned rice fields deteriorated. Furthermore, the heirloom rice varieties that they once planted started to recede into extinction.

To restore the rice terraces, the Department of Agriculture and the Ifugao provincial government earmarked over PHP 30 million in rehabilitation projects. One of these projects, Save the Rice Terraces Program, funded the construction of irrigation and livelihood projects for Ifugao farmers.

Another initiative, the Heirloom Rice Project (HRP) launched in early 2015, focused on the farmers and their traditional rice. Led by the Department of Agriculture and IRRI, HRP aims to enhance farmers’ productivity and the quality of their produce, and expand their market. The idea is to make heirloom rice farming more profitable to encourage more people to stay in the business. The reinvigoration of traditional farming will then assure the survival of the culture and the terraces. 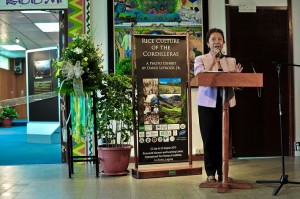 The photo exhibit is a tribute to the culture and ingenuity of the Cordilleran people according to Dr. Casiana Vera-Cruz. (Photo: I. Serrano)

“We are really honoring the rice culture of the Cordilleras here,” said IRRI scientist Casiana Vera Cruz at the opening of the Rice Culture of the Cordilleras. “It underscores the importance of the contribution of the indigenous people through their knowledge system in conserving heirloom rice. This exhibit jives well with HRP’s objectives. It reflects the slogan of the project, which is capturing value and preserving the heritage of the Cordilleras.” HRP was one of the sponsors of Mr. Leprozo’s exhibit at Riceworld Museum.

Mr. Leprozo considers his photos as art, social commentary, and documentation of the cultural identities that are starting to merge with modernity. “Their ways of planting rice are still being practiced in some areas, but in some parts, changes are taking place,” he said. For now, he is not worried about losing the culture. “Although younger people tend to modernize, many return back to their roots.”

Teddy Baguilat, Jr., who represents the Ifugao people in the Philippine Congress, is an example of this. He left his hometown at an early age, to study and work, but returned in 1991 to serve his people as an elected public servant.

“If we lose the appreciation of our youth for the rice terraces culture of the Cordilleras, many of them would leave,” Honorable Congressman Baguilat said. “The biggest challenge is how to convince the youth to stay. 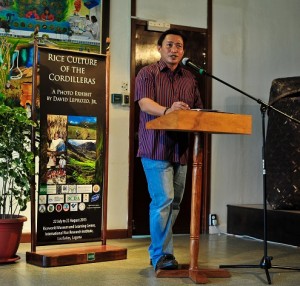 The wandering son returns. In his youth Teddy Baguilat, Jr. left Ifugao Province to seek higher education and livelihood as most young people are wont to do. He returned in 1991 to serve his fellow Cordillerans. (Photo: I. Serrano)

“There was a time when I believed that, for the rice terraces to survive, the Ifugaos should stay in Ifugao. Now, I’ve become more pragmatic,” he said. “My deal with the Cordillerans is that, at least one of their children or one of their inheritors should stay behind to take care of our ancestral heritage. Those who migrated and are now working in cities and overseas should at least support those who stayed behind.”

Mr. Leprozo’s work plays a role in keeping the relationship between those who left and those who stayed vibrant and strong. “Dave has donated a lot of his photos to our compatriots overseas,” said Congressman Baguilat. “I hope that through David’s eyes, people can get a glimpse of how important the rice terraces, heirloom rice, and the life of the Cordillerans are.”