Changes at the consumer level, labor shortages, and rising wage rates are expected to shape rice production in a farmer’s field. Small farmers will opt to mechanize rice farming and participate in land consolidation to achieve scale. Thus, the direction of rice farming in Asia will be toward modernization and commercialization and will be integrated along the supply chain. 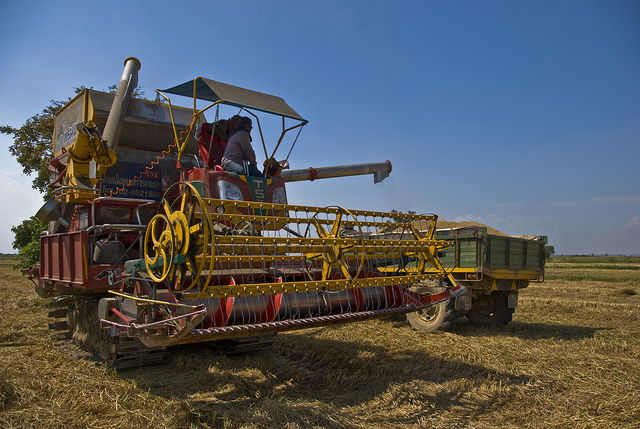 Rice farming in Asia is dominated by millions of small farmers with an average landholding of 1 hectare. Traditionally, both male and female family members have been involved in rice farming. However, strong economic growth in Asia in the past two and a half decades has led to rapid outmigration of rural youth in search of better economic opportunities.

This has resulted in an increasing number of elderly people and women left behind to take care of farming.  For example, the average age of rice farmers in the Philippines increased from 44 in 1980 to 58 in 2011 while the average age of rice farmers in Bangladesh increased from 44 in 1988 to 51 in 2011.1 The traditional role of women in rice farming, which is somewhat dictated by farming practices and sociocultural norms across countries, is also changing across Asian countries. In general, women are mainly involved in establishing the crop, harvesting, and postharvest activities while men lead in preparing the land, managing the crop, operating farm machines, and marketing. With the migration of male members of the household, the women are taking over the role of farm managers and decision makers. This is reflected in the rise of women farm landholders all across Asia, with striking increases in Nepal and Thailand in the past two decades. Based on the Gender and Land Rights Database published by FAO, the share of women’s agricultural landholding in Nepal made a quantum leap from 8% to 19% between 2001 and 2011. Similarly, Thailand witnessed a big jump in women’s agricultural landholding from 15% to 27% between 1993 and 2003 (see Women rising).

Apart from rural outmigration, rising nonfarm opportunities in rural areas that account for 40% of total rural employment are making agricultural labor shortages even more acute in Asia. The increasing labor scarcity has led to a rapid rise in wage rates in the past decade in almost all Asian rice-growing countries. The rate of increase accelerated after the mid-2000s for major rice-growing countries such as China, India, Bangladesh, Indonesia, and Vietnam. According to Steve Wiggins and Sharada Keats in their 2014 report on Rural Wages in Asia, the real wage rate in China increased by more than 90% between 2003 and 2007, by 35% for India between 2005-06 and 2012-13, and by 45% for Bangladesh between 2005 and 2010. Similarly, in Indonesia, the real agricultural wage rate in 2009 was 50% higher than what it was in the first half of the 2000s.

Rice farming transformation
Since rice farming in Asia is traditionally labor-intensive, and with labor costs accounting for 45% of the total cost of production, farmers have been quick to explore the possibility of replacing labor-intensive activities such as land preparation, transplanting, harvesting, and threshing with appropriate mechanization to lower the fast-rising cost of production. Small-scale farm mechanization and custom-hiring arrangements with machines are fast evolving as viable solutions for smallholder rice farmers in Asia. Apart from male service providers, many women and youth are finding it attractive to enter the service provider business for land preparation, transplanting, harvesting, and threshing. 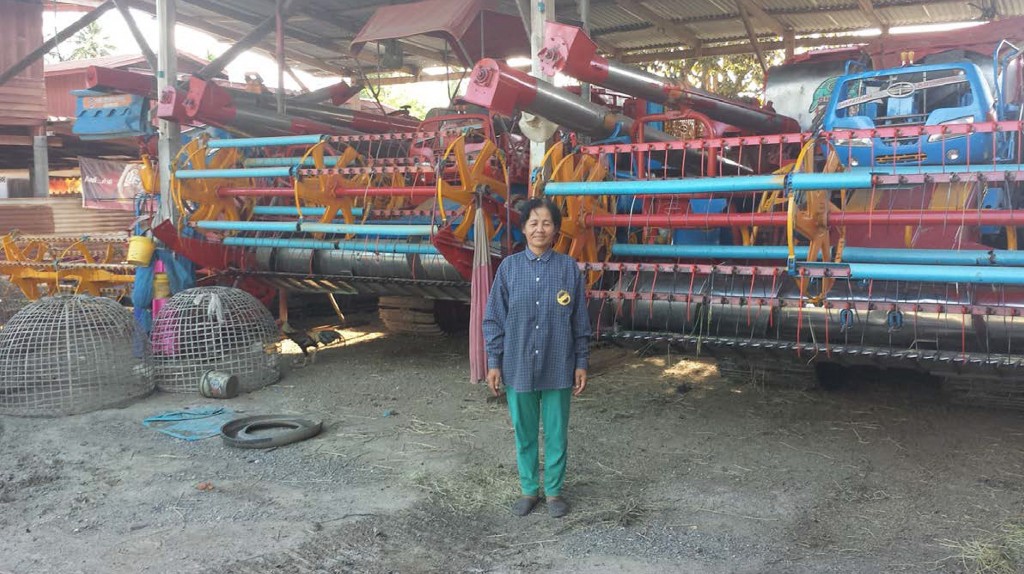 The rate of mechanization varies widely from country to country and also among different rice-growing ecosystems within the same country. The extent of mechanization is much greater in the intensive production systems such as northwest and southern India, the Mekong Delta of Vietnam, and the Central Plain of Thailand than in the rainfed production systems of eastern India and northeastern Thailand. However, rising rural labor outmigration and wage rates in unfavorable rice-growing regions are accelerating the pace of mechanization. It is just a matter of time before mechanization covers the majority of rice areas in Asia, particularly in land preparation, transplanting, harvesting, and threshing.

To offset the unviability of mechanization for smallholder farmers, several models of virtual land consolidation have started to emerge in different parts of Asia. The “Small Farmers, Large Field” model in Vietnam, which allows small farmers to benefit from economies of scale by pooling their small farms into large fields of 50−500 hectares to  lower the per unit cost of using farm machinery, such as combine harvesters, is becoming popular among small farmers.

Similarly, an industrial rice farming scheme introduced by the Suphanburi Rice Millers Association in collaboration with Suphanburi Rice Research Center has convinced the farmers to grow one variety with synchronized planting and harvesting time on around 400 hectares. The idea is to lower the harvesting cost of USD90−100 per acre by 20−30% by providing service providers with a bigger contract for custom harvesting.

Small farmers in many parts of Asia are also renting additional lands that are available because of rural outmigration. With additional land coming through rental arrangement, Gagan Bihari Pradan, a small rice farmer in the eastern Indian state of Odisha featured in a Rice Today article (see A day in the life of an Odisha rice farmer on pages 40-41, Vol. 11, No. 4), now farms 2.5 hectares compared with 1 hectare in 2012.  This allows farmers to modernize their farm operations through the use of mechanical transplanters, combine harvesters, dryers, threshers, etc.

Aside from mechanization, farmers in many parts of Asia are changing farming practices in response to rising wage rates, increasing water scarcity, and higher incidence of extreme weather by moving from labor-intensive transplanting to direct-seeded rice, changing irrigation practices from flooding to alternate wetting and drying, and adopting stress-tolerant varieties. 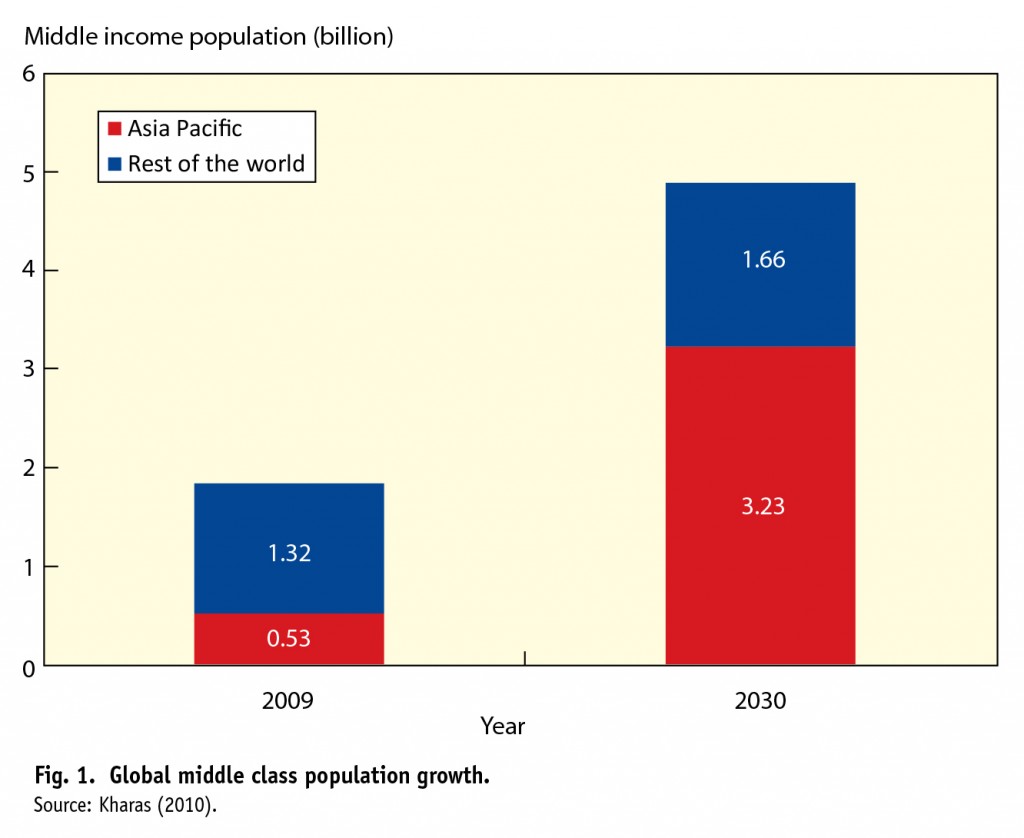 What lies ahead
The emerging Asian economies are expected to march ahead on the back of the increasing consumption of the growing middle class population, which is projected to reach 3.2 billion in 2030 compared with 525 million in 2009 (Fig. 1). During the same period, Asian per capita income is expected to increase sixfold to reach Europe’s current per capita income. Asia’s five largest rice economies (China, India, Indonesia, Thailand, and Malaysia), which account for nearly 65% of total global rice production, are expected to lead Asia’s advance to prosperity. Other emerging Asian economies such as Vietnam and the Philippines, where rice is extremely important in terms of both food security and livelihood for millions of small-scale poor farmers, are also expected to join the bandwagon of prosperity. These seven countries also dominate the international rice market, with Thailand, India, and Vietnam as the three largest exporters, and China, Indonesia, Malaysia, and the Philippines as the dominant rice importers. 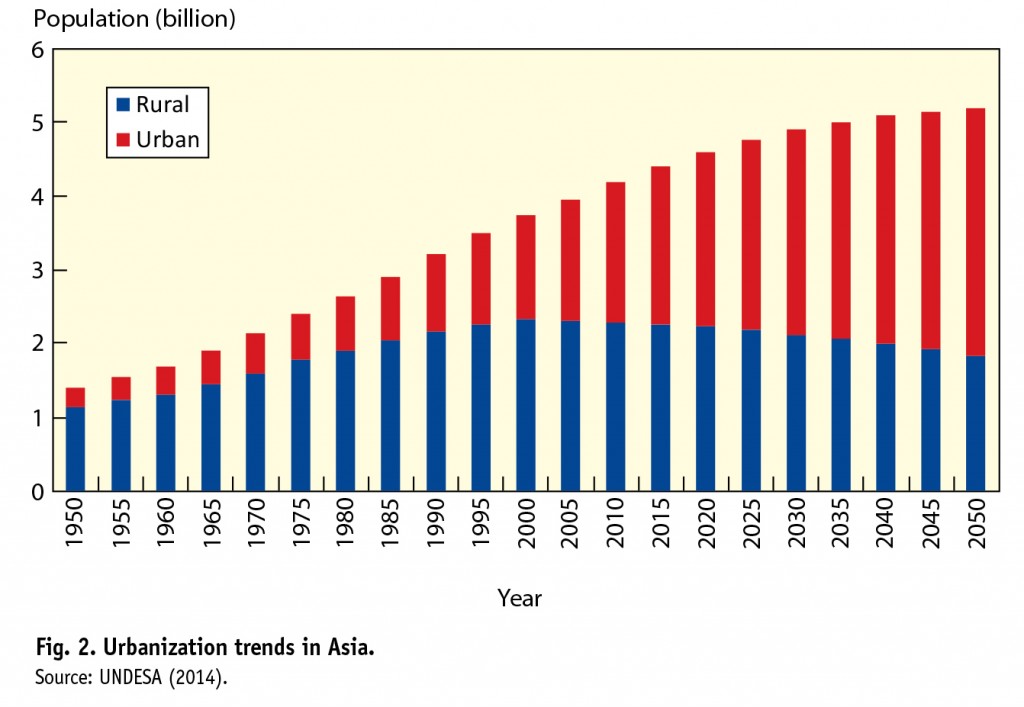 The growing urbanization with more than doubling from 1 to 2.1 billion between 1990 and 2015 is expected to rise in the future with continued strong economic growth and better economic opportunities outside agriculture and the rural sector (Fig. 2). The urban population is expected to reach the level of rural population by 2020 and further grows to account for nearly two-thirds of the total population by 2050 (3.3 billion urban vs 1.8 billion rural).

Income growth, urbanization, and other long-term socioeconomic transformations are likely to continue to influence the composition of the food basket in the future. Normally, one would expect diversification of the food basket to include more high-value products such as meat, dairy products, fruits, and vegetables as income rises. At the same time, people will also be shifting from low- to high-quality rice and will consume rice as a processed product rather than as a grain.

Packaged rice is becoming increasingly popular in cities because of its convenience. In 2012, India was the most active in this sector, with more than 50% or 200 packaged rice product launches in Asia, followed by Vietnam and Thailand, which accounted for 10% and 8%, respectively (source: Mintel.com). The overall size of the packaged rice market in India was 2 million tons in 2012 compared with 1.2 million tons in 2012, an increase of 66% in two years.

Urban consumers are also becoming more attuned to branding and label claims. Rice with various label claims such as rice with low glycemic index for people with diabetes, rice with high dietary fiber and mineral, rice with high antioxidants, vitamin A-enriched rice, and many others  are now prominently placed in supermarket shelves. As consumers become more familiar with branding, some proportion of rice sales is expected to move from supermarkets to online trade. Amazon in India now sells branded basmati and nonbasmati rice online for home delivery. One would expect similar trends in other Asian countries soon.

As people juggle their fast lifestyle in cities, the preference for easier and more convenient cooking-food products will continue to rise in the future. To cater to this segment of consumers, ready-to-eat microwavable rice boxes have started appearing on supermarket shelves. The recent purchase of Tilda, the Indian basmati milling and export company, by the U.S. food group Hain Celestial, which plans to link the Tilda brand with its existing distribution channel and bring basmati and ready-to-eat rice to the western world, is just the beginning of such integration and consolidation in transforming the rice sector into a market-driven value chain.

These changes at the consumer level, labor shortages, and rising wage rates are expected to shape the farm-level transformation in terms of mechanization and vertical integration. Small farmers will be forced to mechanize rice farming and achieve scale by participating in innovative new models of land pooling and consolidation. The end result will be moving toward modernization and commercialization of rice farming that is sustainable and vertically integrated along the supply chain.

Dr. Mohanty is the head of the Social Sciences Division at the International Rice Research Institute (IRRI). Dr. Bhandari is an agricultural economist at IRRI-Bangladesh. Dr. Mohapatra is a social scientist in IRRI-India. Ms. Baruah is an IRRI scholar.