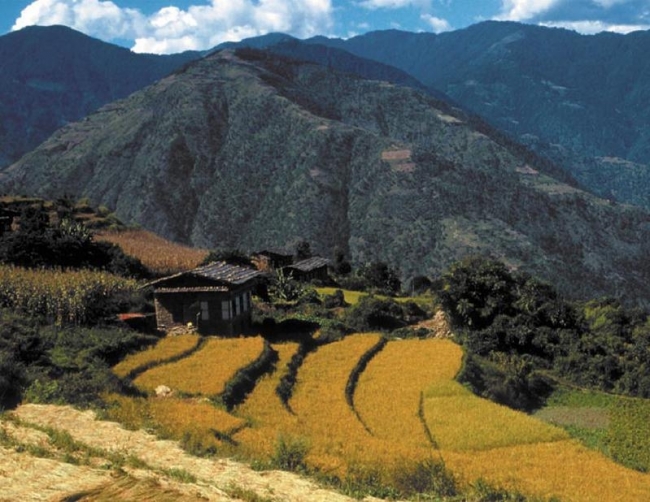 Central to making farming more environmentally friendly, and so preserving and restoring such magnificent landscapes as this one in Bhutan, is the application of integrated pest management. This includes adopting farm practices that encourage the natural enemies of insect pests, such as spiders ), and so eliminating the market for toxic and often misapplied pesticides. (Photo: Gene Hettel)

The environment will always feel the impact of agriculture, not least of rice farming. Rice is the staple food of almost 3 billion people, and rice farms cover almost 150 million ha — more than any other crop. Much of this land is flooded paddies, whose unique environmental implications include land leveling and terracing, heavy water demand, and greenhouse gas emissions. In addition, the rice landscape is in many areas extremely rich in biodiversity, the survival of which depends on careful management.

More than merely acknowledging the impact of agriculture on the environment, the International Rice Research Institute (IRRI) recently acted to ensure that environmental sustainability will always be central to its research program, as well as to its day-to-day operations at its research campus and its relationship with neighboring communities.

IRRI management decided the time was ripe to codify the institute’s longstanding commitment to environmental protection and sustainable rice production. Formal implementation of the resulting Environmental Agenda will take place over the coming year.

The initiative arose partly in response to the 1992 Rio Earth Summit and the 2002 World Summit on Sustainable Development in Johannesburg. These events firmly established a global commitment to protect and conserve the environment while achieving social and economic development — all of which influence, and are influenced by, agriculture in general and rice farming in particular. Compounding this commitment, the United Nations Millennium Development Goals set a target of halving 1990 levels of world poverty by 2015, while ensuring environmental sustainability and reversing the loss of natural resources.

“Environmental concerns have long been apparent in IRRI’s research,” says Ren Wang, IRRI deputy director general for research and a core contributor to the Environmental Agenda. “But to take the environmental approach in a more holistic way, to consciously commit to conserving the environment and achieving sustainable development, and to package it in this way — I think
that is something new.”

“Global warming and other environmental trends are already having an impact on rice production, and this impact will increase,” he explains. “Rice producers all over the world need to understand the implications of environmental change. For IRRI to help the national agricultural research and extension systems of rice-producing countries, we need to continue to develop technologies that can be used to cope with this change.”

IRRI’s commitment to environmental protection begins at home on its research campus at Los Baños in the Philippines. The institute’s recycling scheme produces 10 tons of usable compost per year from lawn clippings and other biodegradable waste, and reduces waste volume by as much as 70%. As well as reducing energy use, the scheme minimizes dumping, burning and burying.

The Environmental Agenda reinforces IRRI’s community spirit by promoting environment friendly initiatives implemented for and with the institute’s closest neighbors. Since 2000, IRRI Community Projects have contributed to the environmentally sustainable economic and social development of poor communities in the municipalities of Los Baños and Bay. Dr. Wang points out that this is an example of an existing program at IRRI that benefits from inclusion in a formal agenda.

“You have to live in harmony with your surrounding society,” he says. “IRRI wants to emphasize this harmony with respect to people and their environment. Building initiatives like Community Projects into the Environmental Agenda can increase local environmental consciousness and commitment. By doing things ourselves in an environmentally friendly way, we can help and encourage our neighbors to do the same.”

IRRI’s research program promises to extend the benefits of the Environmental Agenda to the farthest corners of Asia and beyond. These benefits include stemming farm-chemical pollution by promoting technologies that reduce and optimize their application, and conserving freshwater resources with water-saving rice varieties and farm practices. More broadly, IRRI’s work to improve the health and livelihood of poor rice farmers and consumers directly addresses the rural poverty that is the most intractable threat to the environment.

Mr. Barclay worked for the International Rice Research Institute (IRRI), where he managed, wrote for and edited the institute’s magazine, Rice Today, and handled IRRI’s media relations during the international rice crisis of 2008.