Two new cold-tolerant varieties, FOFIFA 183 and FOFIFA 184, were released for the high-altitude rainfed lowland rice ecosystem through activities of the Africa Rice Center component of the Stress-tolerant Rice for Africa and South Asia (STRASA) project, which is funded by the Bill & Melinda Gates Foundation, coordinated through the International Rice Research Institute (IRRI), and implemented by the Africa-wide Rice Breeding Task Force.

The official launching of the two varieties was held in Antsirabe on 22 May 2015, in the presence of the minister of agriculture for Madagascar, Director General of FOFIFA (the national program of Madagascar) Dr. Lala Razafinjara, and Director General of AfricaRice Dr. Harold Roy-Macauley. 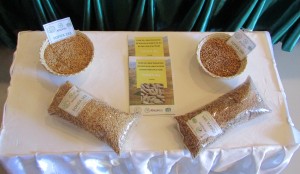 Sample grains of FOFIFA 183 and 184, the new cold-tolerant rice varieties.

AfricaRice opened a new station in October 2014 in Madagascar with Dr. Moussa Sié, AfricaRice country representative and senior breeder, based in Antananarivo, and Dr. Negussie Zenna, AfricaRice rice breeder for high altitudes, based in Antsirabe, Madagascar, to reinforce the capacity of the FOFIFA rice breeding program. This illustrates the strength of the partnership between FOFIFA and AfricaRice, especially with regard to the development of cold-tolerant rice varieties for Madagascar. The two newly released varieties are expected to help farmers improve their productivity when facing agro-ecological constraints such as cold. However, increasing paddy production in the field is highly dependent on the availability of good-quality seeds. In this aspect also, FOFIFA and AfricaRice, through support from the STRASA project, have produced 5 tons of certified rice seeds to be distributed to farmers. This intervention is very timely after the devastating cyclone Chedza, which destroyed a lot of the rice crop in Madagascar earlier this year.

Madagascar is located between 12° and 24° latitude south and 45° and 49° longitude east, 40 km off the African coast. The total area of the country is 587,040 km², of which 5% is arable land and 58% is pasture. The central plateau has an average altitude of 1,200 m and is characterized by a dry tropical climate (average temperature 13−19 °C, rainfall 1,000 to 2,000 mm per year, dry season from May to October). The coastal areas, the eastern side in particular, are hotter and more humid. The south is very dry. The central plateau is one of the most important rice-growing environments. However, rice production in this environment is highly constrained by cold weather.

Rice farming is a very important activity in Madagascar, which ranks fifth in the world in terms of per capita consumption—136 kg/year, or 0.375 kg per person per day. Knowing that rice matters strongly to the people of Madagascar and it is a prime rural economic activity, which is practiced by at least 85% of the farmers in Madagascar, the country has been a member of AfricaRice since 2010.