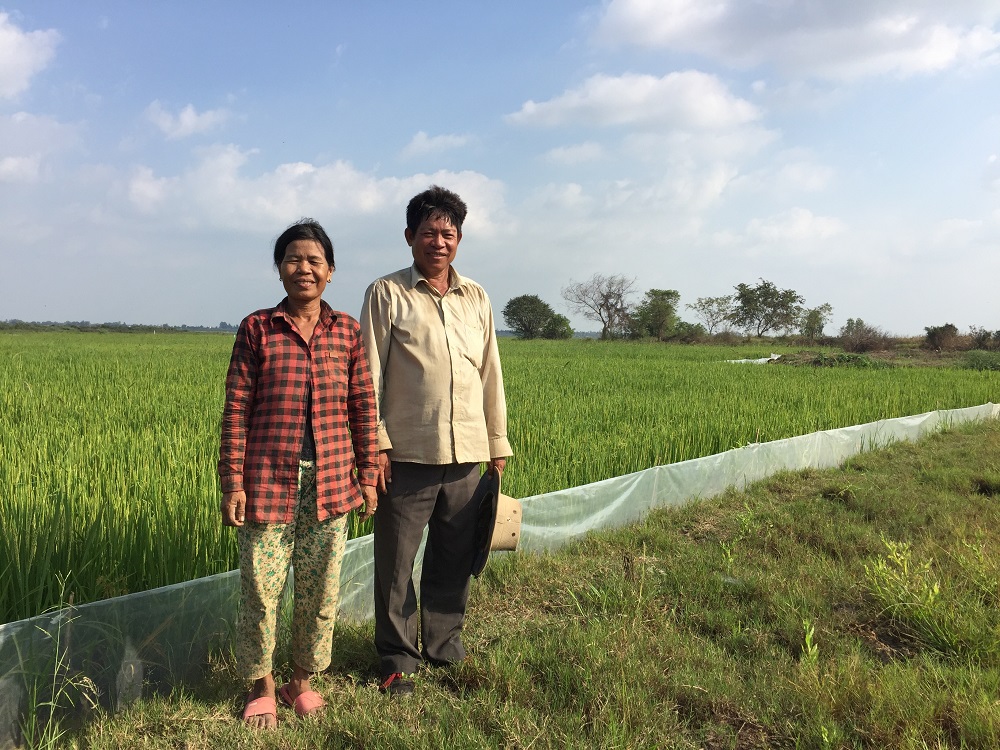 Mr. Lay Nget and his wife installed a trap barrier system to manage rodents in their rice farm. (Photo by R. Flor, IRRI)

It is harvest time at the end of the 2016 dry season in Bati District in the Cambodian province of Takeo. Once again, Lay Nget is able to harvest only animal fodder from his rice field because of the heavy damage caused by rodents. Mr. Nget’s story is a familiar one for many farmers in the area—a situation that can lead to unpaid debts and abandoned lands.

In Southeast Asia, rodents cause preharvest rice yield losses of 5‒10% on average by feeding on the emerging panicles and maturing grains. In Cambodia, the extent of rodent damage varies depending on the season and location. In 1996, a major rodent outbreak in the country destroyed enough rice to feed more than 50,000 people for a year. In Takeo, average rodent damage estimates of 22% for one season were recently recorded. Rodents not only reduce crop yields and damage stored grains; they also carry diseases that can spread to humans and other animals.

The race against rodents
In Cambodia, rice farmers use an array of techniques to manage rodent pests. Many rely on rodenticides or electric fences despite the associated risks to people and animals.

Electric fencing, powered by a 12V battery, is not only risky for humans but also a costly and time-consuming rodent management option. Farmers need to check the fencing regularly throughout the night to remove any animals killed by an electric shock that might cause a short circuit. In addition, some farmers may practice rat hunting and use traps. Farmers in Takeo, however, are still unable to effectively manage the rodent problem even with these methods. 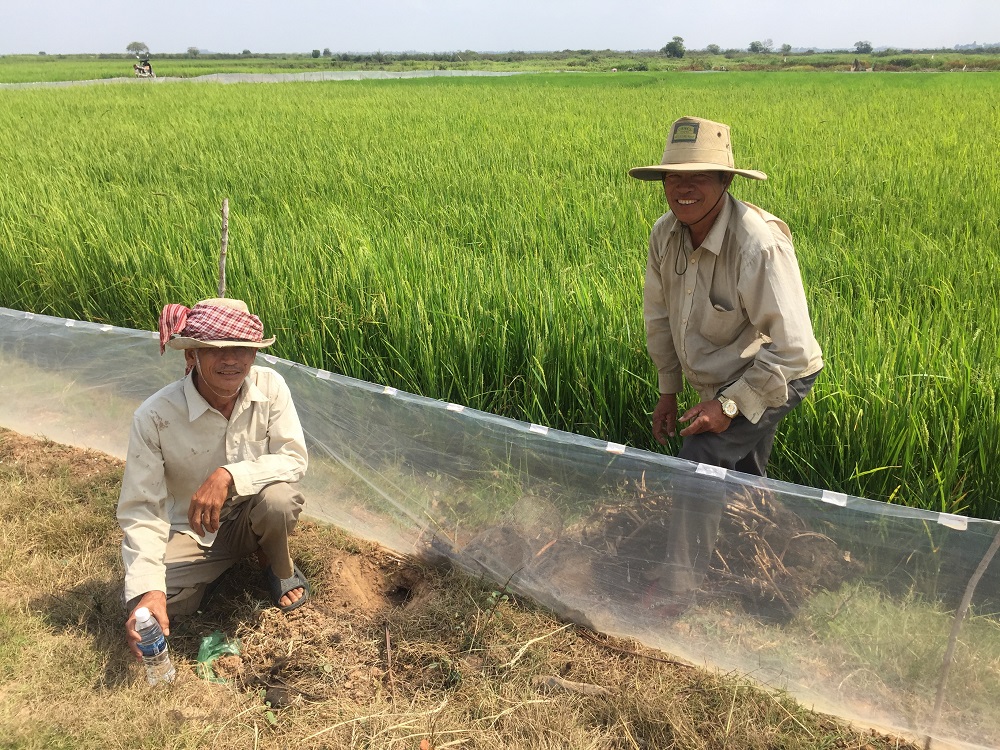 An EPIC campaign against rice pests
To help rice farmers minimize yield losses from pests and diseases, a USAID-funded project, Development of Ecologically Based Participatory Integrated Pest Management (IPM) Package for Rice in Cambodia (EPIC), was launched in 2016. EPIC is a 4-year project led by the International Rice Research Institute (IRRI).

In collaboration with the Cambodian Agricultural Research and Development Institute, the General Directorate of Agriculture, and the Takeo Provincial Department of Agriculture, Forestry, and Fisheries, IRRI researchers and farmers established adaptive research experimental sites in Bati and Trang districts in Takeo Province. Following a focus group discussion, farmers from Takeo had prioritized rodents as their main pest of concern. Then, throughout two subsequent rice cropping seasons, researchers worked with cooperating farmers, in groups of 10‒15, to implement ecologically based rodent management field trials across three 5-hectare treatment sites in each district. The management methods were adapted based on the local situation and preferred practices of farmers.

In Bati, farmers practice recession rice cropping during the dry season when the lake waters recede. This creates a situation in which rats have continuous access to rice crops by moving from one planted area in the wet season to another in the dry season and vice versa. Hence, a linear trap barrier system (LTBS) was set up in which rats move between these areas. The LTBS uses plastic as a fence with multiple-capture traps spaced every 20 meters along its length. This facilitates trapping early in the season before the rodents begin to breed. In addition, targeted and limited use of bromadiolone anticoagulant rodenticide was made to accommodate the farmers’ request to use some form of chemical control. Anticoagulant rodenticides are safer than other chemical rodenticides because there is an antidote for people who are accidentally poisoned. 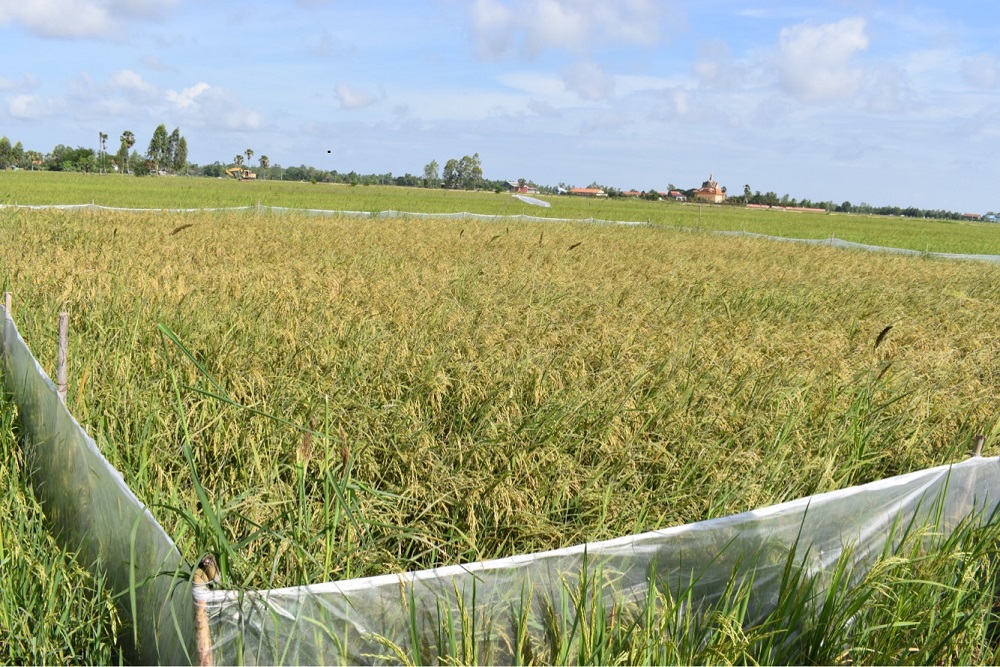 A CTBS set up in an intensive rice-growing area in Trang District. Rice crop inside the fence was planted two weeks earlier than the surrounding crops. (Photo by R. Flor, IRRI)

In Trang, the farmers plant three rice crops per year. They expressed their interest in testing the community trap barrier system (CTBS). This system uses a plastic barrier with multiple-capture traps surrounding a small ricefield plot. The enclosed plot is planted with rice 2‒3 weeks earlier than the surrounding fields. The CTBS takes advantage of the highly attuned sense of smell of rats; it attracts rats from up to 200 m away, providing a halo of protection for approximately 8‒10 hectares. In addition, the LTBS was installed near rodent refuge habitats, where no rodenticides were used.

Strategies for ecologically based rodent management also included maintaining basic hygiene in field margins, synchronous planting of rice crops, and community rat hunts early in the season. Electric fencing is not used. The key to successful implementation of rodent management is for farmers to work together and use the different techniques at the right time. Control is best applied early in the season before the rats begin to breed. Removing one female rat before it breeds is equivalent to removing 30 rats when the crop is maturing.

Farmers experimenting with the technology
During the reflection meetings held at the end of each season, the farmers in Bati and Trang expressed their enthusiasm for the management options after observing that the experimental fields had less damage and considerably higher yields. A year later, following the end of the scientist-led trials, some farmers are leading their own learning experiments and adapting the techniques introduced through the EPIC project. One of them is Mr. Nget. He modified the trap barrier system (TBS) to completely surround his 2-hectare field with plastic fencing and 10 traps. For three hired laborers and the additional plastic to augment what was left from the project, he spent a total of USD 85. He also used rodenticide (zinc phosphide) for a short period. 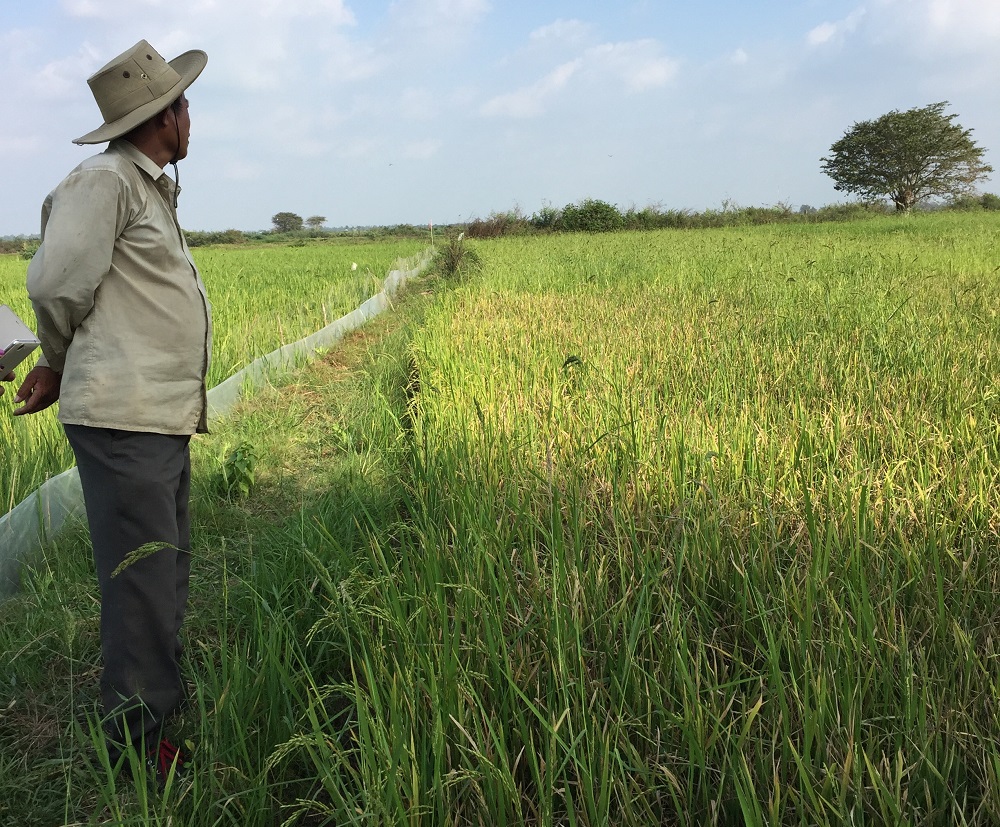 “I am happy with my TBS,” Mr. Nget said. “I think it provided 90% protection from the rats.” He noted that the adjacent field, owned by his son-in-law, suffered from a lot of rodent damage. “In just three days, the rats had destroyed a majority of his field.” Mr. Nget said he would promote the technology to his son-in-law to prevent this from happening again.

Chan Penh, a 61-year-old farmer from Bati, had observed the experiments near his farm and adopted the TBS the following year. He set up a TBS around his 1-hectare field with the help of another farmer. Copying the the technique used by Mr. Nget, he made and set up 20 traps.

During the season, Mr. Penh checked the traps twice per day and found 6‒10 rats per day. He also used zinc phosphide mixed with crabmeat every 2‒3 days.

“I am satisfied with the results,” he said. “I spent only USD 75 and predict losses of around 30%. When I used electric fencing in the previous year, I spent around USD 135, with losses of 50%.”

In Trang, Sou Sopheap, cooperating farmer of the EPIC project, tested the LTBS. He used the LTBS because his area is beside a forested area that provides a refuge for the rodents.

“The LTBS was cheaper than the CTBS,” Mr. Sopheap explained. “I set up 50 meters of fence with three traps and caught around 100 rats in one season. Using only this technique, my yield increased from 4.6 tons per hectare in the previous season to 5.8 tons per hectare with the LTBS. I would use the technology again because it is a suitable management option for this environment.”

These farmers and others continue to evaluate their options. Their positive experiences provide a good basis for other farmers to adopt the technologies and, hopefully, encourage them to work together on a community scale. The knowledge gained from the trials is also being shared in a cross-learning platform across Cambodia, for example, through exchange visits with farmer groups from other provinces.

The next steps for the EPIC project are to continue supporting this cross-learning platform and develop an integrated package of IPM recommendations for Cambodian rice farmers that can be adapted to the farmers’ varied situations. Data are also being collected to assess the benefits from the adoption of ecologically based rodent management technologies to further understand the impact on farmers’ livelihoods.

_____________
Dr. Flor is a postdoctoral fellow at IRRI, Ms. Kraus is a PhD student at Louisiana State University, Mr. Then is an agricultural research and development specialist at IRRI, Mr. Kong is a research assistant at the Cambodian Agricultural Research and Development Institute, and Dr. Stuart is a crop management and ecology scientist at IRRI.