IRRI relies on its capacity to stay at the forefront of innovation in research and in the operations that support these research activities. 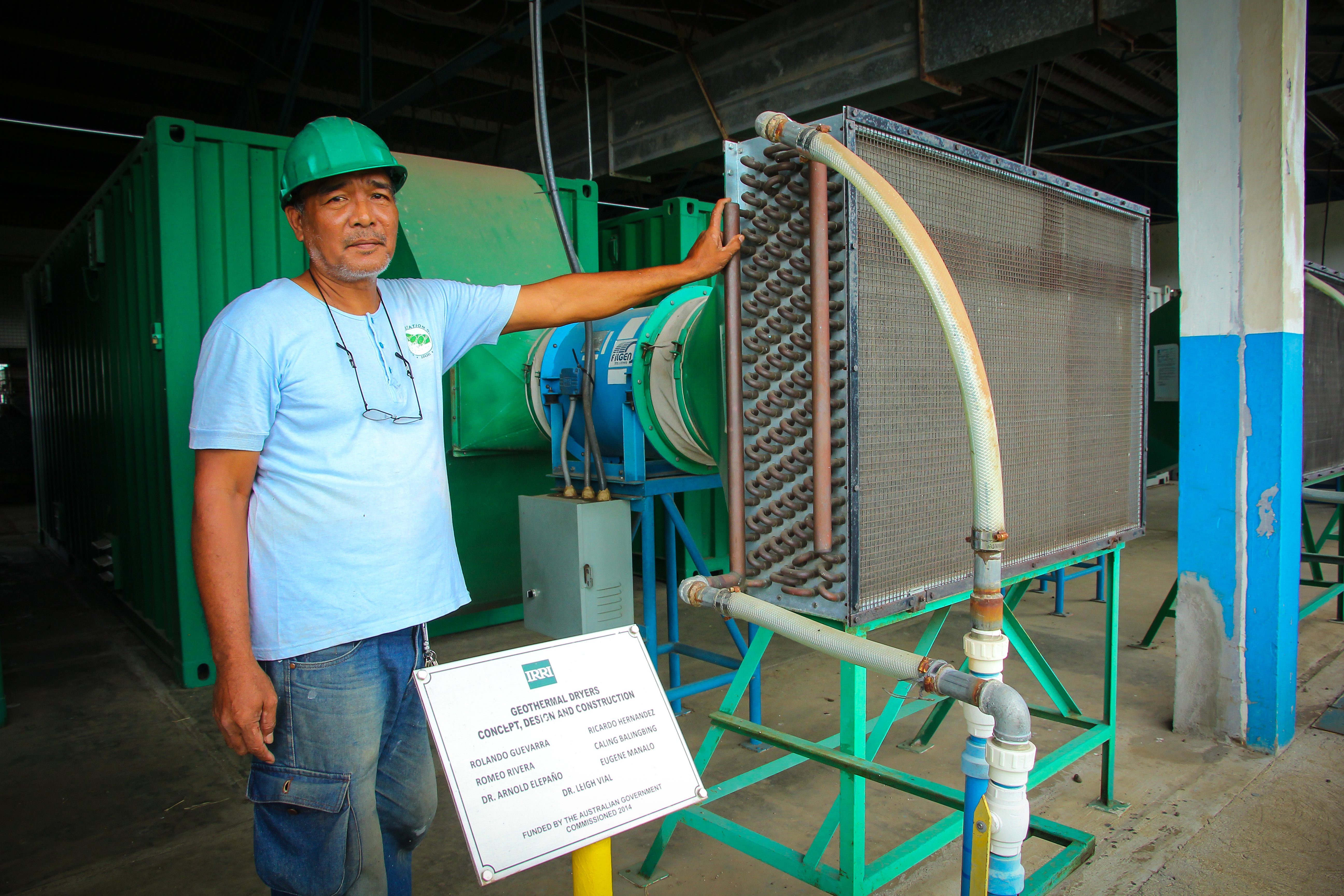 Mr. Guevarra was part of the team that conceptualized and designed the geothermal dryer. (Photo by Isagani Serrano, IRRI)

The International Rice Research Institute (IRRI) is globally recognized as a center of excellence in research that delivers sustainable solutions to rice-based agri-food systems. To achieve this, IRRI relies on its capacity to stay at the forefront of innovation in research and in the operations that support these research activities.

In Asia, in the 1960s, when IRRI started its mission to eliminate hunger and poverty, improve the lives and livelihoods of rice farmers and consumers, and protect rice agri-food system environments, the water buffalo and sickles were often the most advanced “machines” used in rice farming. Since IRRI began working on mechanization in the 1970s, it has developed numerous machines and implements that are now commonly used in rice farming across the continent. These include hand tractors, axial-flow threshers, and grain dryers. In addition, IRRI has developed mechanized solutions to improve research operational efficiency and reduce the cost of research.

From fossil fuel to “recycled” air
In 2013, an innovative idea was proposed by Rolando Torres, a senior associate scientist in what was at the time the Crop and Environmental Science Division of IRRI. Mr. Torres proposed setting up a shipping container connected to the hot-air exhaust of the large air-conditioning systems servicing the research laboratories at IRRI headquarters in Los Baños in the Philippines. The proposed system would use the warm, dry air from the exhaust as the heat source for drying rice paddy and rice straw inside the container.

Prior to this, IRRI relied on kerosene-powered bulk grain dryers to reduce the moisture content in grains to a level that is safe for storage. Aside from being expensive, kerosene, a fossil fuel, is a nonrenewable energy source that emits the greenhouse gasses nitrogen dioxide, sulfur dioxide, and carbon monoxide. All three can cause health problems when inhaled. Kerosene dryers also required constant monitoring throughout their operation because of the risks associated with having a flame as a heat source when drying biomass.

“I took up the idea of using the heat from the air-conditioning system as it presented an opportunity to reduce IRRI’s carbon footprint, eliminate the risks associated with kerosene dryers, and lower the cost of drying,” said Leigh Vial, head of the Experiment Station at the time.

“The container was fitted to a ducting system with a canopy above the exhaust outlet of the air-conditioner,” Dr. Vial said. “The canopy channeled hot air into the container with the rice grains and straw placed on shelves inside.”

A blind spot
The system had a significant shortcoming, though. For bulk-harvested material at IRRI, the flatbed dryers heated by kerosene were intended to dry material (between 14% and 17% moisture content) while maintaining high grain quality and seed viability. The research of Martin Gummert, who leads the Postharvest and Mechanization Research Cluster at IRRI, showed that relative humidity must be maintained at or below 70% to effectively achieve equilibrium drying.

“Unfortunately, this challenge with the drying system using air-conditioner exhaust proved too difficult to overcome because the large air-conditioning units were switched off every night,” Dr. Vial said.“At night, the humidity in the container would rise above 70%, causing a rewetting of the rice grains and straw.”

This rewetting deteriorates both grain quality and seed viability. With the kerosene dryers, the problem could only be avoided if the systems were kept running and carefully monitored by staff throughout the night. 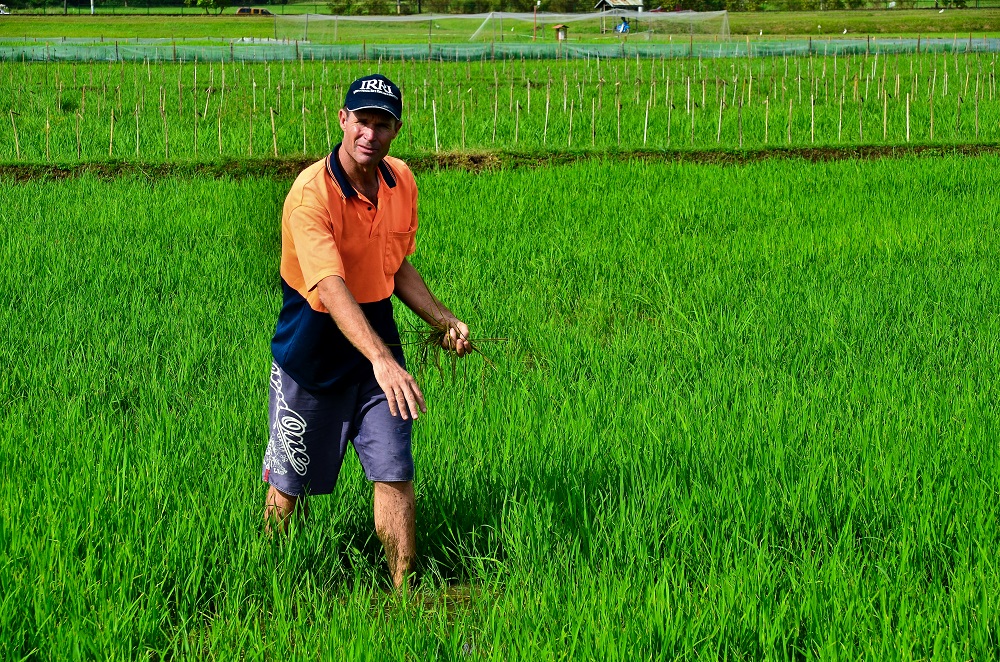 An idea in hot water
An alternative heat source was therefore needed and it just so happens that the irrigation water IRRI draws from an aquifer is warm. Dr. Vial realized that this was a potential source of heat that could be used in place of the air-conditioning system’s exhaust. In 2014, the construction of the first geothermal dryer was undertaken, again through the efforts of Mr. Guevarra.

The same container design was used in this system, but with two variants: one with a mobile roll-in-roll-out shelving system; the other with the flatbed dryer design. The water temperature from one of the wells that supply irrigation water within the Upland Farm area of IRRI is45‒48°C. When passed through a heat exchange system, the water sufficiently increases the air temperature to achieve efficient equilibrium drying. After passing through the heat exchange system, the water is then channeled into a reservoir and used to irrigate the research fields.

“As a result of the development and installation of these water-heated dryers, the cost of drying operations has decreased by more than 80%,” Dr. Vial said. “The risks associated with having a flame in the proximity of drying biomass have been eliminated and the gas emissions from drying activities at IRRI have declined drastically.”

By 2017, the Zeigler Experiment Station had fabricated eight geothermal dryers located in the Upland Farm complex. These dryers are based on a 6.1-meter (20-foot) shipping container and have been converted to the flatbed dryer-type system, which increases the speed and efficiency of loading and unloading of paddy and rice straw. On average, it takes 2 to 3 days to reduce the moisture content from the harvested biomass from around 23% to 14‒17%. Unlike kerosene dryers, the system can run 24 hours a day, 7 days a week to preserve seed quality and viability. 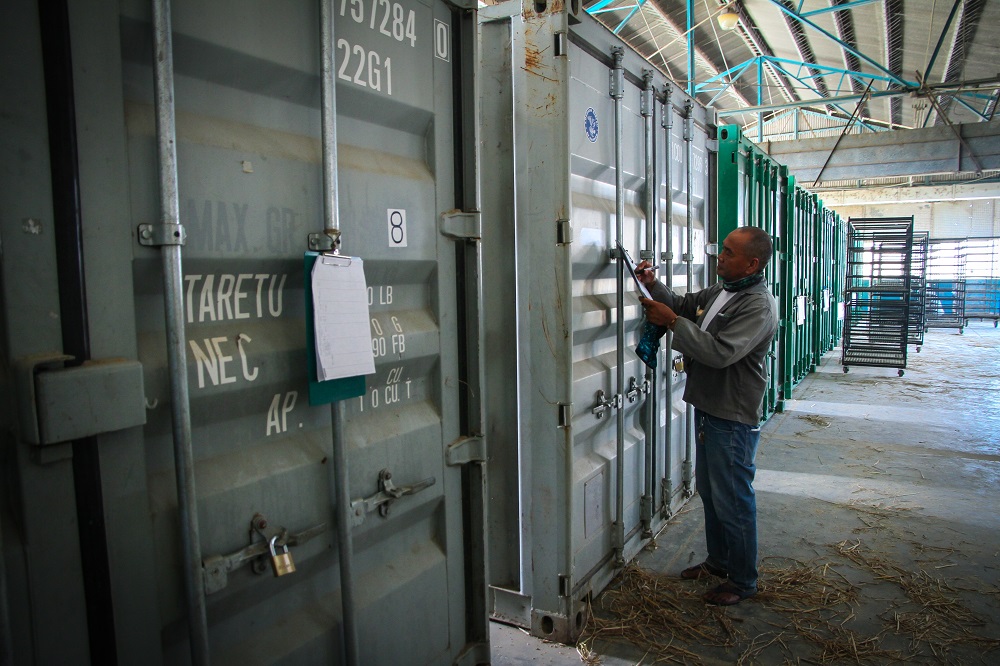 From innovation to the new norm
The geothermal dryers now fulfill a critical role in postharvest processing for breeding and agronomy research activities at IRRI headquarters. Each season, these dryers are responsible for drying almost 100,000 samples. Because of the critical nature of these dryers, a backup hot-water supply that can provide a continuous flow to the system if the pump servicing the irrigation well is interrupted is being developed.

The aim of the backup system is to use solar power to produce hot water during the day and then switch to the main IRRI power supply when the solar panels are not generating power. Once fully operational, the system will provide an opportunity to develop dryers with a low operating cost and low carbon footprint at other points on the farm where the water from the aquifer is not hot enough for drying operations.

The new drying systems used for grain and biomass are among many examples of how practical innovative solutions improve IRRI’s operational efficiency thanks to the creativity and inventiveness of its dedicated staff.
__________________
Dr. Quilty is the platform leader of Integrative Research Support at IRRI.