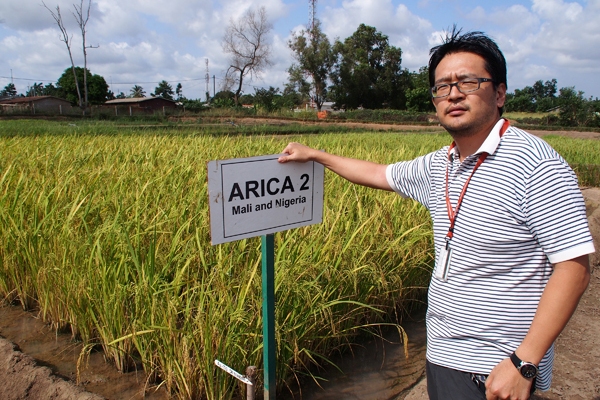 DR. SAITO’S WORK has led to a refocus of upland rice breeding work at AfricaRice, which now includes aus and indica materials.

It is difficult for colleagues to believe that once upon a time Kazuki Saito, an agronomist at Africa Rice Center (AfricaRice), was more enthusiastic about American football than about agricultural science. He confesses that, during his undergraduate years at Kyoto University, when he joined the university’s American football team, he probably spent more time in the field than in the classrooms.

“However, I learned some valuable lessons from the game and I still use some of the strategies and insights from it to achieve goals at work,” remarks Dr. Saito.

He has been able to bring the same energy, passion, and single-mindedness that helped him succeed as a player to his field research to achieve impact on the ground.

Farming roots
Dr. Saito was born in a rice-farming family in Niigata, Japan—home of the world-famous Koshihikari rice. His father, who is head of a rice farmers’ cooperative in Tainai City in Niigata, continues to grow this variety. Given such close affinity to rice, it was only fitting that Dr. Saito took up rice science for his studies and career when he grew up.

After completing his degree, his supervisor, Takeshi Horie at Kyoto University, recognizing his sharp, analytical mind and determination,asked him to join an agricultural research project in Laos as part of his master’s degree.

Turning point
This proved pivotal for Dr. Saito’s future. His experience working with poor farmers who grow upland rice on hillside fields in northern Laos kindled in him an enduring passion for results-driven field research that can help make a difference in the lives of such farmers.

His research in Laos was quite grueling because of the distance between field sites, which often could be reached only on foot through the mountain trails. His training as an American football player must have come handy during those days. Based on his PhD research, Dr. Saito eventually published eight peer-reviewed papers.

Moving to Africa
After completing his PhD, Dr. Saito made a big decision to conduct his postdoctoral research in Africa instead of working as a lecturer in Japan. Again, he was guided in this decision by Professor Horie, who was a Board member of AfricaRice at that time and was a strong supporter of rice research and development in Africa.

“Also for a researcher, it is more interesting and challenging to work on rice in Africa than in Japan,” says Dr. Saito.

Since 2006, when he joined AfricaRice, Dr. Saito has worked on improving yield potential, and abiotic and biotic stress resistance in rice, with emphasis on phosphorus deficiency, iron toxicity, drought, and weeds.

Transferring experience from Asia to Africa
Building on his successful experience in northern Laos, Dr. Saito introduced improved indica-type and aus-type upland varieties in West Africa and demonstrated their good performance during his initial years at AfricaRice. His work has led to a re-focus of upland rice breeding work at the Center, which now includes aus and indica materials.

He also conducted extensive research on weed competitiveness, which showed that upland indica and aus could be a useful source for improving both yield potential and weed competitiveness. Recently, he also found that such materials have strong phosphorus deficiency tolerance.

A driving force
Today, Dr. Saito is the driving force behind the Africa-wide Rice Agronomy Task Force, launched in 2011. The Task Force brings together the resources of rice agronomists across Africa to improve rice productivity by introducing, testing, and disseminating baskets of good agronomic practices, decision support systems, and small-scale machinery. He leads task force activities in 21 countries across Africa in close partnership with national research institutes.

He has recently developed a decision-support application for providing farmers with field-specific nutrient management guidelines called RiceAdvice. The tool is based on similar agronomic principles as IRRI’s NutrientManager. It can be used offline to enter information and get immediate responses and is now being tested in more than 10 countries.

Dr. Saito is also leading an AfricaRice team that has assessed yield gaps for rice in nine African countries in the Global Yield Gap Atlas project. A first version of a yield gap map for Africa can be accessed at www.yieldgap.org.

He has been actively involved in training more than 120 researchers, extension workers, and undergraduate students, in agronomy-related topics. He has also co-supervised or provided scientific backstopping to eight PhD students.

Research output
Dr. Saito has authored and coauthored 46 scientific papers in peer-reviewed journals and as book chapters. “These papers are all based on solid field agronomy work of direct relevance to food security,” says Marco Wopereis, AfricaRice deputy director general.

Dr. Saito received the first prize in the category of Outstanding Paper and Presentation Award at the 3rd Africa Rice Congress, Yaoundé, Cameroon, in 2013. Recently, he was among three coauthors who received the Best Paper Award from the Japanese Society of Crop Science.

Persistence and hard work
Dr. Saito’s persistence and hard work have rubbed off on others he worked with and have earned him a great deal of respect. In December 2010, Dr. Saito flew to Japan to undergo a lengthy operation to remove a pituitary tumor. Throughout this stressful period, he remained calm and dedicated to his work, checking the status of field experiments through his AfricaRice colleagues, and analyzing data. Two months later he was back in the field.

“Dr. Saito has shown stamina, determination, and leadership in conducting field research, in close collaboration with researchers and farmers, leading to tangible results often under difficult circumstances,” says Dr. Wopereis. “Because of his ability to see the big picture, he is able to provide direction to rice agronomy research in Africa, even at his relatively young age.”