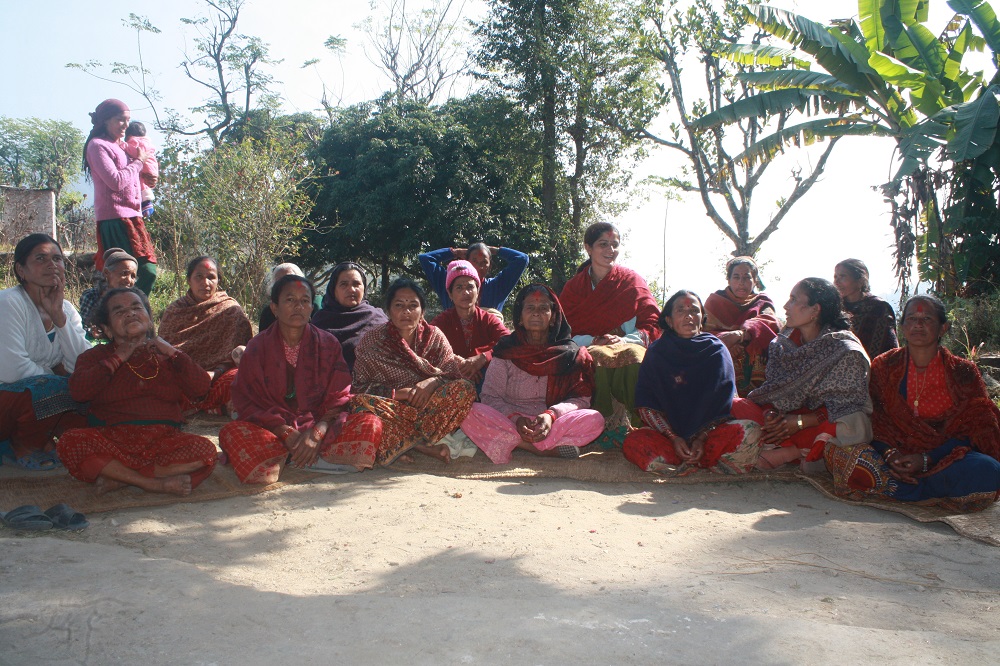 Women seed-producer groups and seed cooperatives in the three districts were established to ensure that seeds of improved rice varieties are widely available. (Photo: GRiSP)

In the western mid-hill districts of Nepal, women have joined forces to form seed-producer groups. With the shortage of high-quality seeds becoming a major problem, the government of Nepal and the Consortium for Unfavorable Rice Environments (CURE) engaged in an informal seed multiplication system that teaches members of the seed-producer groups to produce good-quality seeds. These women of substance manage their multiple roles as housewives, mothers, and partners in farming and income generation.

“What men can do, women can do better,” says Laxima Adhikari, president of the Harrabot Ladies Seed Producers Group in Nepal’s Lamjung District, of how their organization came to be. They wanted to prove that women are capable of producing high-quality seeds that can generate higher production and additional income.

“When I saw the men forming their group, accessing information and producing quality seeds, I thought we, too, can replicate their experience and benefit as well,” she explains.

Supporting multiple roles
CURE, which is led by the International Rice Research Institute (IRRI), works with women farmers in salinity-, drought-, and submergence-prone rice environments and in upland areas where varying climatic conditions can lead to deeper poverty. In the three mid-hill Nepal districts of Lamjung, Tanahun, and Gorkha, CURE and its country partner—the Institute of Animal and Agricultural Sciences—facilitated the formation of seed-producer groups, provided training on seed production and extension, organized cross-site visits of farmers and extension workers, and supported farmers in acquiring the equipment they need to continue seed production.

Women seed-producer groups and seed cooperatives in the three districts were established to ensure that seeds of improved rice varieties are widely available. This work is an example of how GRiSP brings together partners to increase impact.

Women of substance: The community seed producers of the Nepal mid-hills
The promise of new knowledge and better opportunities inspired Laxima and 34 other women to form the Harrabot Ladies Seed Producers Group in 2010. That same year, the government of Nepal declared that women’s cooperatives should be supported and that female farmers be given priority assistance in the form of tax exemption, credit access, and additional training. Project monitoring and technical assistance are provided to seven seed-producer groups and two cooperatives.

Another group, the Mahjuwa Ladies Seed Producers Group, produces seeds of upland and lowland rice varieties and engages in vegetable production, beekeeping, and livestock-raising. These women are also members of a vegetable cooperative established in 2005 and benefited greatly from training activities.

Husbands and other family members of the Harrabot group expressed their support for the additional role of their wives and mothers as seed producers. More importantly, the women are happy and proud of the extra income they generate from the added economic activity. 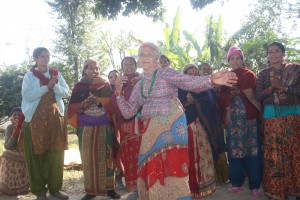 An elderly woman from the Mahjuwa Ladies Seed Producers Group welcomes visitors from the Consortium for Unfavorable Rice Environments and the Institute of Agriculture and Animal Science. (Photo: GRiSP)

Reaping the benefits
Usha Sapkota, president of the Mahjuwa Ladies Seed Producers Group, says, “I have been happy and content for the past two years.” Usha now has quality seeds on hand and is no longer worried about what to grow in the coming season. “Before this, I did not know that there are new varieties that can improve our rice production.”

Many of the women reported an increase in production by more than 50% since they started using high-yielding and drought-tolerant varieties. Members of the Harrabot and Mahjuwa groups also increased their incomes by an average of USD 115–345 (Rs 10,000–30,000) per cropping season from the sale of increased harvests of rice, seeds, and vegetables. The extra income is used for vegetable production, home improvements, and children’s school fees.

These “women of substance” are leading, influencing, and making a difference in the lives of other women and men in their respective rice-farming communities and, by these actions, are motivating other people to take on multiple roles to improve their circumstances.