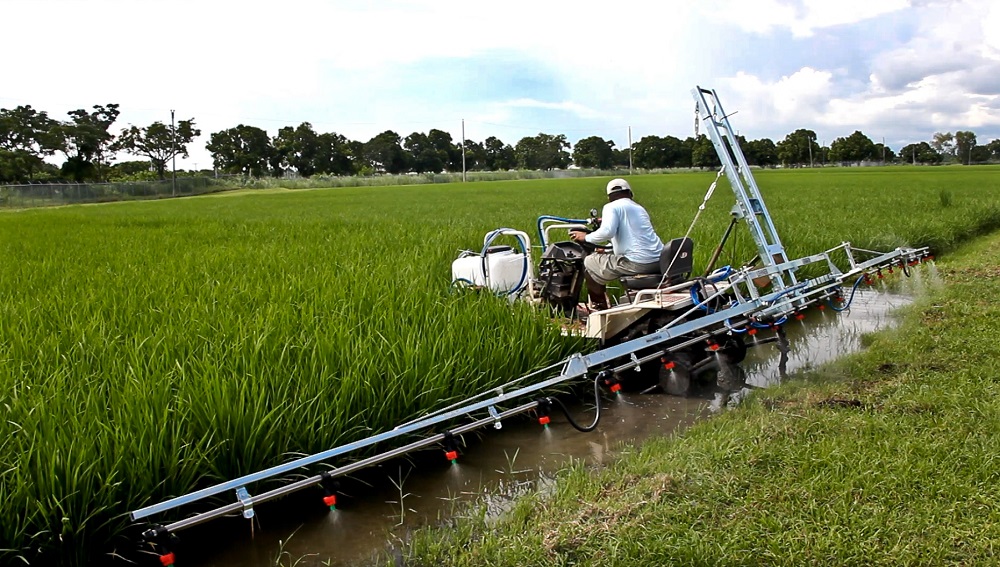 Substituting fertilizer for salt and sand. In Europe, the POLARO is used to spread salt and sand for better road traction. In Asia, this lightweight machine can be attached to a four-wheel undercarriage for fertilizer and crop care application. (Photo: Isagani Serrano, IRRI)

In addition to water, fertilizer is also an important input in rice production on the irrigated lowlands of Asia. But, unlike water, which usually flows naturally for even distribution onto farmersâ€™ fields, the uniform application of fertilizer is laborious and difficult.

Fertilizer boosts rice yield when applied in the right amount and at the right time. Applying it uniformly ensures an even distribution of nutrients to the rice crop. However, for years, uniform application has been a big obstacle for most rice farmers and even on the Zeigler Experiment Station of the International Rice Research Institute (IRRI) in the Philippines. Although fertilizer spreaders are commonly available, they usually are designed for use in large fields pulled by big tractors.

In 2014, an informal meeting between Walter Zwick, IRRI collaborator in Cambodia, and Helmut Lehner, owner and managing director of Lehner Agrar GmbH in Germany, led to a consultation with Martin Gummert, IRRIâ€™s postharvest expert. during which Mr. Lehner made an offer to the IRRI postharvest team to test POLARO, a battery-operated mechanical spreader developed by the German company for applying sand and salt onto highways, but it works just as well for fertilizer distribution on small rice farms.Â Mr. Lehner donated one unit to IRRI to assess its performance against manual fertilizer application.

â€śWe thought that this mechanical spreader had tremendous potential to help smallholder farmers obtain a uniform spread of granular-based fertilizers in the field,â€ť Engr. Gummert said.

After three cropping seasons, the postharvest team measured up to a 9% yield increase, with urea (46-0-0) and complete fertilizer (14-14-14), when the POLARO spreader was used. It also took less time to apply the fertilizer using the mechanical spreader. Manual application took approximately 2 hours per hectare, whereas mechanical application using a tractor, running at 2 kilometers per hour, took 1.3 hours per hectare. Another field trial was done for one cropping season in Battambang, Cambodia. Compared with manual application, there was a 5â€“6% yield increase with the POLARO spreader. 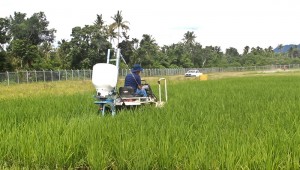 Sealing a win-win collaboration
Armed with the field results and suggestions for machine modifications, the IRRI postharvest team organized a roundtable discussion with Mr. Lehner and his team to tackle collaboration strategies. This led to Mr. Lehnerâ€™s commitment to improve the design to make the spreader more compatible for use by smallholder farmers. He also provided IRRI with funding for further adaptive testing of the new version of the POLARO spreader in the field.

Realizing that the utility of the machine could be further maximized, Mr. Lehnerâ€™s team developed an additional sprayer applicator for pesticides (herbicides and insecticides), which consisted of a spraying boom, a tank, and a pump that fits the modified frame of the POLARO. As with fertilizer application, the spraying of pesticides in Asia is mostly done manually, with very uneven distribution. This can lead to potential negative effects on the environment and the health of the operators.

Mr. Lehner then sent IRRI a free unit of the new spreader/sprayer, that is, a two-in-one system of a fertilizer spreader and pesticide applicator. This new version is being tested and will be used in field trials in 2016.

Precision farming for sustainability in Southeast Asia
Improved fertilizer and pesticide application reduces waste, emission, and pollution and protects the health of operators and consumers. These benefits are key to IRRIâ€™s quest to develop rice production practices that are more environmentally sustainable than the current practices.

Collaborators in theÂ Closing rice yield gaps in Asia with reduced environmental footprints project (CORIGAP) in Vietnam and Thailand quickly realized the tremendous potential of the fertilizer/pesticide spreader when briefed on the results from the IRRI farm. CORIGAP aims to close rice yield gaps through environmentally sustainable means.

â€śFor the 2016 rainy season, we want to use the POLARO fertilizer spreader in our treatment fields and compare it with farmersâ€™ fields that employ manual fertilizer application, and then observe its effect on yield and farmersâ€™ income,â€ť said Ladda Viriyangkura, expert on rice inspection and certification from the Thailand Rice Department. â€śWe are also interested in its added use to improve herbicide application,â€ť she continued.

Additional free units donated by Lehner GmbH to IRRIâ€™s partners in these countries will enable further testing of the spreaders under smallholder farm conditions.

Partnership for sustainable rice production
The partnership between IRRI and Lehner GmbH also benefits IRRIâ€™s partners, who are now able to verify another technology for mechanized rice production with their clients and other rice consumers through more sustainably produced rice.

Engr. Balingbing is a senior associate scientist,Â Ms. Quilloy is a communication specialist and facilitator of the Learning Alliance, andÂ Engr. Sandro is an assistant scientist at IRRI.