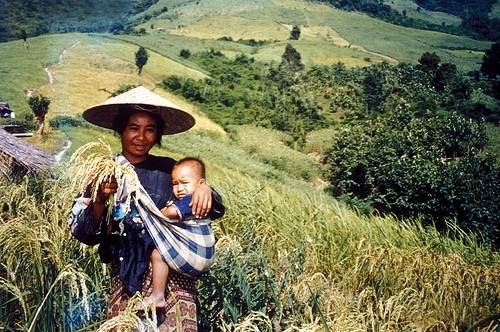 The eighth day of March 2011 marked the 100th International Women’s Day. This year’s theme touched base with the call to provide women with “equal access to education, training and science, and technology.” To celebrate this momentous occasion, the International Fund for Agricultural Development (IFAD), the Food and Agriculture Organization of the United Nations (FAO), and the International Labor Organization launched the publication of the study made by FAO in collaboration with IFAD and the World Food Program, titled “State of food and agriculture 2010-11: Women in agriculture—closing the gender gap for development.” The report presented groundbreaking new data on the important roles that women play in agriculture and rural economies and the ways in which they are taking on greater responsibilities as farmers, food producers, and providers for their families.

In the context of agriculture and rural economies, rice farming is a major source of employment for many families, especially the poor. In fact, about four-fifths of global rice production is grown by small-scale farmers in low-income developing countries. And, quite significantly, rural women have traditionally played and continue to play an important role in both rice production and postharvest activities.

However, the crucial roles and the substantial support women provide to society have often not been recognized, much less appreciated. Social stereotypes have confined them in constricting environments that limit their growth and potential to contribute more to the development of their respective communities.

Education and training are key foundations of greater gender equality, and women’s development and empowerment. As more women take on roles as farmers and heads of households, they urgently need access to technical training and opportunities to boost their ability to farm productively and run viable businesses. In South Asia and Africa, for example, most women have not gone to school and do not have access to the products of science and technology. Despite progress in bringing science and technology to millions of poor rice-farming families in stress-prone rice  environments, many women farmers are still underrepresented in research activities such as on-farm experiments, farmers’ field days, training, and dissemination. Moreover, women’s exhausting domestic chores, such as collecting water and wood for fuel, divert their time away from farming tasks and nonfarm enterprises that eventually lead to low agricultural yields and food insecurity.

The International Rice Research Institute (IRRI), as a member of the Consultative Group on International Agricultural Research (CGIAR), has long advocated gender equality, in line with the CGIAR’s mandate to reduce poverty and hunger and increase income through rice research for development.

IRRI uses a three-pronged approach in tackling gender issues: (1) conduct strategic research on emerging gender issues in the rice economy, (2) include women in technology development and dissemination, and (3) enhance the leadership skills of Asian and African women in rice research, development, and extension.

IRRI’s research on gender issues looks into women’s and men’s roles that are often conditioned by several interrelated socioeconomic (including class, ethnicity, age, marital status, and religion), cultural, political, and environmental factors. Changes in women’s environment cause shifts in women’s roles. For example, the increasing out-migration of men and the decreasing male-female ratio in agricultural labor tend to weaken the traditional divisions of labor in rice production, with women not only increasingly providing field labor for rice production but also taking on managerial  and decision-making roles in rice farming.

A lack of comparable gender-disaggregated data in rice production, however, serves as a major constraint to gender research. Often, statistics reflect only the labor participation of casually-hired women laborers. The labor inputs of unpaid women are undercounted and undervalued in agricultural statistics; thus, these women are seldom referred to as rice producers, farmers, and income earners. So, IRRI developed a systematic collection of gender-disaggregated variables in base household surveys that provide the foundation for understanding the underlying patterns for labor participation that later on guide proposed interventions, training and extension strategies, and formulations of gender-responsive policies. In 2002, IRRI pioneered the Leadership Course for Asian and African Women that develops the leadership skills of women in agricultural research, development, and extension (see The hand that rocks the thresher and The pillars of Africa’s agriculture).

Moreover, despite women’s visibility in fields and homesteads, scientists, agricultural engineers, and extension workers tend to consult only the men and they exclude women farmers in project activities in which women have an influence and in which their resources (time, indigenous knowledge, and labor) will be affected by newly introduced technologies. Hence, IRRI continues to push for projects that involve women’s participation such as Stress-Tolerant Rice for Poor Farmers in Africa and South Asia (STRASA). IRRI’s social scientists required that at least 30% of the farmers involved in participatory varietal selection be women.

Finally, more efforts will be poured into mainstreaming gender equality across the world through the Global Rice Science Partnership (GRiSP) that was launched last year. IRRI, in partnership with the Africa Rice Center and the International Center for Tropical Agriculture, has developed a gender strategy that will be integrated in GRiSP’s mission to reduce poverty and hunger, improve human health and nutrition, reduce the environmental footprint of rice, and enhance ecosystem resilience of rice production systems through high-quality international research, partnership, and leadership.

Dr. Paris is an IRRI socioeconomist and gender specialist.