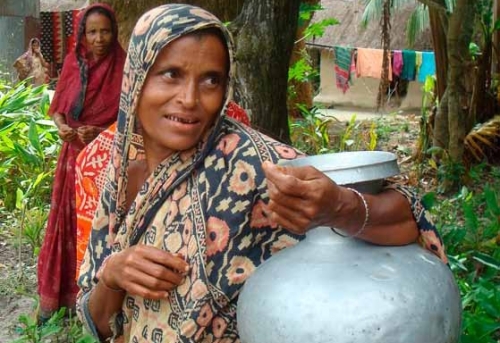 “Yes!” was the answer of women participants in a leadership training course when the facilitator asked them, “Has any one of you been put in a position to choose between work and family?”

The ensuing exchanged looks among the women—as if seeking affirmation from one another—reflected the inner conflicts that women deal with when their roles as a mother and as a professional are pitted against each other.

These women are professionals in Asia and Africa who help rural women break the conventional thinking that women play only a supporting role to their male counterparts in the family.

On the contrary, as highlighted in this leadership course, women without question play major and critical roles in the maintenance and success of rural livelihoods and household undertakings in their communities. Stereotypes, however, have downplayed their importance and put them in the shadows of the men.

This is why the International Rice Research Institute (IRRI) in 2002 started the Leadership Course for Asian and African Women to develop the leadership skills of women in agricultural research, development, and extension.

“Women from poor farming and landless households contribute 20–75% of the labor required for rice production in Asia,” explained Thelma Paris, senior IRRI scientist on gender analysis. “Unfortunately, gender inequalities in relation to access to resources and support services still persist due to erroneous assumptions and misconceptions as well as deeply embedded social norms.

“However, times are changing,” she added. “In India, disparity in education among girls and boys is narrowing.”

According to several gender studies in Bangladesh, poor women are more engaged than men in rice postharvest activities, including drying, threshing, seed selection, storage, and processing.

One example is parboiling rice and turning it into different rice products for home consumption and selling.

Dr. Paris’s studies conducted in Bangladesh in 2004 and in India in 2007 consistently  showed that the male head of the household makes decisions on farm management. However, with the increasing male out-migration,  who are left behind are compelled to decide “on-the-spot” on things related to farming. Their ability to make sound decisions depends on their access to information about best farming practices.

“Even when women keep the family’s income, they are not free to spend it as desired,” Dr. Paris’s study concludes. “Moreover, if the income is not enough, they bear the burden of borrowing and repaying loans to private money lenders.”

There is a “disconnect” between the roles women actually play and the persistent  perception that rural women who tend the household and manage major phases in rice production are mere housewives “who do not work” or hold no job. This perception has automatically excluded women farmers from participating in field demonstrations, farmers’ field days, and other participatory field experiments.

To bridge this gap, one solution is to train female researchers and extension workers as leaders in their own institutions in an effort to give women more importance in agricultural research and development programs.

The women who attended the leadership course for research and extension in rainfed rice ecosystems are researchers and development and extension workers from Asia and Africa. Each participant had a story to share about how she is helping empower rural women.