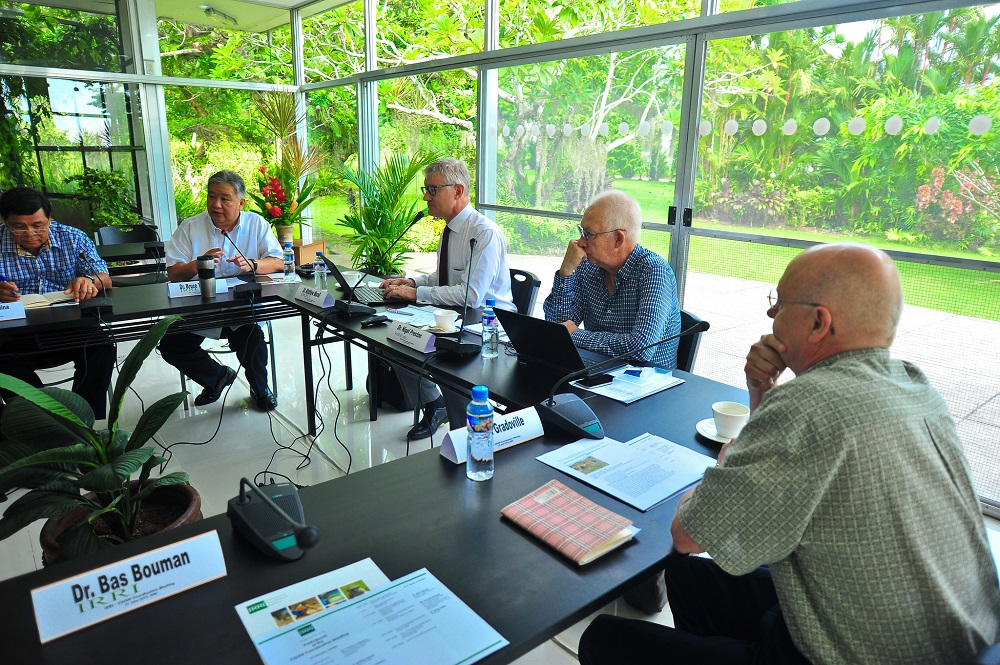 Representatives of international agricultural research centers organized under CGIAR discuss the ongoing reforms in the system and the opportunities and challenges presented by the process. (Photo by Isagani Serrano)

A key topic was the ongoing reforms in the CGIAR system and the opportunities and challenges presented by the process. “Working together as closely as possible enables a much more relevant future for the entire system,” said Dr. Matthew Morell, IRRI director general, who described the key stakes in the ongoing CGIAR reform process, why it is needed, and what are going to be some of the next steps for the centers.

“Opportunities to pursue strategic combinations of commodity and systems research approaches in support of the plans for the agricultural development sector in countries and regions such as ASEAN (Association of Southeast Asian Nations) and SAARC (South Asian Association for Regional Cooperation) are timely and strategic,” said Dr. Bruce Tolentino, IRRI’s deputy director general for communication and partnerships.

Also raised during discussions was the engagement of CGIAR centers in countries’ national agriculture sector plans, including in arrangements such as the various CGIAR Research Programs. “I think that would serve the science interest very well,” said Dr. David Johnson, head of IRRI’s Crop and Environmental Sciences Division. “But if we turn it around, I think it would also serve national interests very well as countries would be able to see where to allocate resources and when to collaborate with each other.”

Some center representatives expressed reluctance over the suggestion for a collaborative framework because of possible interagency competition for funding and complications brought about by dealing with several cross-cutting themes. However, many acknowledged the benefits and importance of a such a framework when supporting sector plans of specific countries or regions.

“I know it’s difficult but it is really crucial,” said Andy Jarvis, CIAT’s director of Decision and Policy Analysis. “There should be a space where eight centers, for example, can collectively see what is being done in Vietnam even though IRRI is already involved with Vietnam’s national rice program. We are more powerful collectively than individually.”

Because of its close partnership with the Philippine Department of Agriculture, IRRI was asked by several center representatives to take the lead in organizing a briefing about CGIAR with incoming Agriculture Secretary Emmanuel Piñol. Sec. Piñol will visit IRRI soon to discuss current collaborations between the Philippine government and the institute. Tolentino said that the agenda could be expanded to include the CGIAR.

IRRI might also hold a briefing about CGIAR during the meeting of ASEAN senior officials in Palawan in August, according to Tolentino.