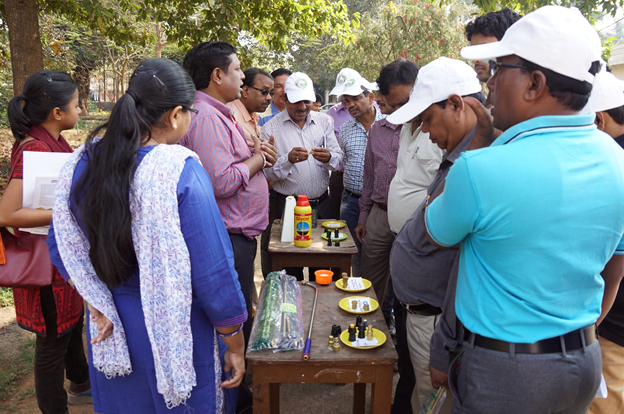 A representative from ASPEE India, a manufacturer of agricultural sprayers, demonstrates herbicide spraying equipment and accessories. The proper use of herbicides is part of an effective IWM strategy. (Photo: CSISA)

BHUBANESWAR, India—Change agent intermediaries attended workshops on integrated weed management (IWM) to help disseminate better weed control practices and reduce crop losses in Odisha. The implementation of timely and effective IWM practices and correct herbicide spraying techniques can have a significant impact on the state’s productivity. In Odisha, improved weed management can increase rice yields by up to 30% compared to current farmers’ practices.

Manual weeding and improper use of herbicides are widespread in northeastern India, including Odisha. The average yield losses in cereal and non-cereal crops in these areas are generally high because of rainfed farming where weed control is insufficient. The problem is aggravated by the growing labor scarcity that forces many farmers to delay weeding during critical times in crop production resulting in lower harvests. With the rising labor wages, hand weeding has also become unaffordable to small-scale farmers. Moreover, weeds are a major concern in new crop establishment methods, such as direct-seeded rice, thus hampering the wide-scale adoption of improved cropping systems.

To mitigate crop losses due to weed, the Institute on Management of Agricultural Extension (IMAGE), a state-level training center of the Government of Odisha Agriculture Department, and Cereal Systems Initiative for South Asia (CSISA) Odisha Hub organized the IWM and herbicide spraying techniques workshop in Bhubaneswar on 24–25 January.  The training is designed to strengthen the existing extension system by developing master trainers on IWM and service providers for herbicide spraying and mechanical weeding.

The workshop included sessions in identifying different types of weeds and their management practices, various herbicide spraying techniques, and appropriate IWM strategies for rice, green gram, mustard, maize, and sunflower. A  total of 62 government extension and non-government personnel were trained as master trainers and service providers and are expected to disseminate knowledge on IWM practices and safe handling and proper herbicide application through their own networks

In addition, CSISA emphasized the importance of a strong linkage among researchers, extension agents, NGOs, private companies and organizations, and progressive farmers in making IWM more effective and sustainable in the region. A workshop on devising means to achieve productivity through adoption of IWM at scale as held for input dealers/retailer, representatives of key herbicides companies, manufacturers of pesticide sprayers, service providers, and NGO partners on 29 January.

“There is a need to integrate the efforts of all stakeholders so that IWM related knowledge and support reaches farmers at the earliest,” said Dr. B.N. Dash, director of IMAGE.